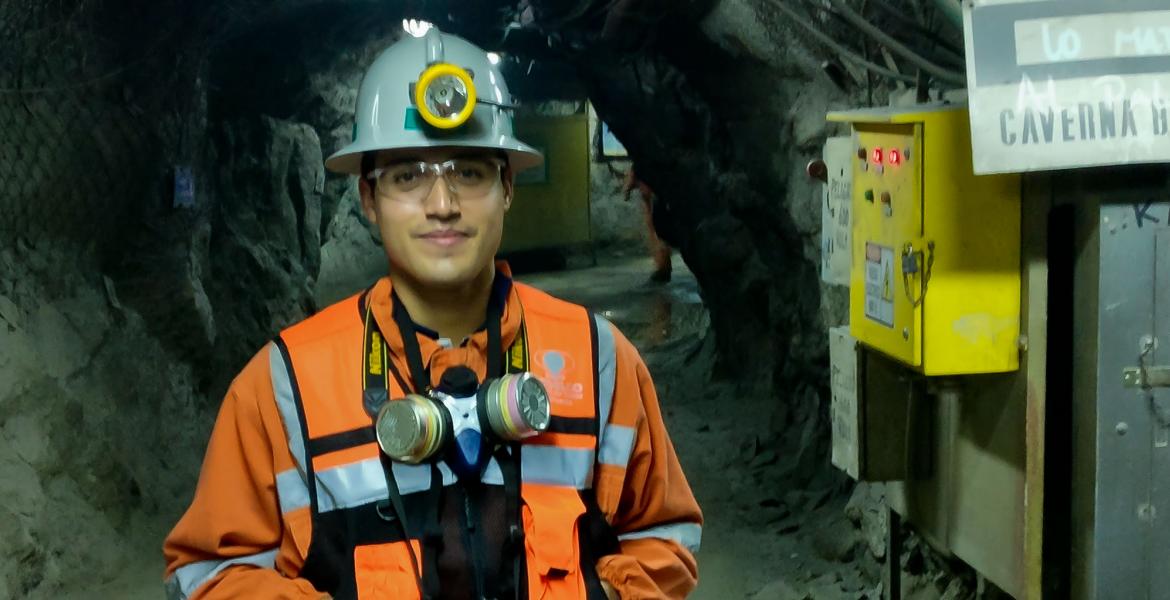 Miguel Pugmire: “The industry’s made a huge impact on me and who I am right now. It’s given me a lot of opportunities, and I’m forever grateful.”

By
Emily Dieckman
Time to read
3 minutes
Print
a- a+
Read so far
Standout senior from a small mining town in the Atacama Desert on course to collect three bachelor’s degrees. Fourth article in series about diversity and inclusivity in mining engineering at the University of Arizona.

University of Arizona mining engineering undergraduate Miguel Pugmire has packed more traveling, internships and academic achievements into his 22 years than most people do in a lifetime.

“Long story short,” he said, “My father is a mining engineer.”

Pugmire’s family moved from a small mining town in the middle of the Atacama Desert in Chile to Mesa, Arizona, when he was 14. From a young age, he saw a career in mining not only as a way to follow in his father’s footsteps, but also as his ticket back home to Chile.

In May he’ll earn three bachelor’s degrees: in entrepreneurship, business management, and mining and geological engineering. To get it all done, he’s taken 25 credits every semester for the last two years. He has an internship set up in Chile for the summer after graduation, but he’ll be back in fall 2018 to wrap up his master’s degree via the UA’s accelerated master’s program for mining engineering.

The summer before he started college with a Wildcat Excellence scholarship, Pugmire worked as a construction laborer. He gained respect for the crucial employees who often go unnoticed and did work on the UA Medical Center at his soon-to-be campus -- now soon-to-be alma mater.

“I could say I helped build it,” he joked.

Internships gave me an overall view of what a mining engineer does and personally I found that the boots on the ground was my favorite aspect of the operations."

Pugmire didn’t waste any time once he got to college. He immediately joined the Society for Mining, Metallurgy & Exploration and started getting to know students, professors and industry professionals.

“It was really important for me coming in as a freshman to get involved as soon as possible,” he said. “It’s a small community. So when you expand your network, you’ll see people down the road you met 10 years ago.”

Pugmire got an internship at Freeport-McMoRan’s central mine planning office in Oro Valley as his freshman year came to a close, and later interned at the company’s Sahuarita operation and Safford mine. He also interned with local startup MISOM Technologies.

“Internships gave me an overall view of what a mining engineer does, and personally, I found that the boots on the ground was my favorite aspect of the operations,” he said.

Pugmire volunteers at the San Xavier Underground Mining Lab on Saturdays and is working on two capstone projects, one through the McGuire Center for Entrepreneurship and another through the Engineering Design Program.

For his engineering design project, he’s acting as co-captain for the senior team in the SME/National Sand, Stone and Gravel Association Student Design Competition.

During phase one in the fall semester, teams have three weeks to create a feasibility study for a mining operation. Those with the best solutions advance to phase two, where they have just 35 hours to prepare a presentation for industry judges at the national SME Annual Conference & Expo.

Before this year, the University of Arizona team had never made it to phase two, though it was a close call in 2017 when Pugmire was on the junior team. Brad Ross, professor of practice and co-director of the UA Lowell Institute for Mineral Resources, said one of the judges apologized to team members because he felt he’d made a mistake in not putting them through.

“They came back and started preparing their entry for their senior year in March,” Ross said.

It paid off. Pugmire and his five teammates, along with teams from five other universities, vied for the top spot in phase two at the 2018 SME conference in Minneapolis on Feb. 23. The UA team took second place.

Rising Through the Ranks and Growing SME

Pugmire has risen through the ranks of the UA SME student chapter and is now president. He is credited with increasing student engagement by creating more officer positions in the organization. Weekly meetings that once attracted only a few students have to be held twice a week because there’s not enough room for everyone in one sitting.

“The young man is nothing short of phenomenal,” Ross said. “He’s brought the whole team together.”

His position as head of the club has earned him the respect of his peers, who wonder when he ever finds time to take a break.

Pugmire’s idea of a break was studying abroad in Brazil through the Eller College of Management’s global cohort program so he could knock out 18 credits in nine weeks -- 15 through the program and three more online. While he was in Fortaleza, though, he did find time to enjoy Brazilian culture, check out the Amazon rainforest and visit national landmarks. It fortified his resolve to experience different places and cultures through the mining industry.

“He’s one of the most enthusiastic people I’ve ever met,” said Gaurav Gupta, UA SME’s vice president of professional development. “He wants to do good for other people, not just for himself.”

For Pugmire, doing good for others often involves advising his fellow students to get involved early and step outside of their comfort zones. As for his enthusiasm for mining, it’s just part of who he is.

“The industry’s made a huge impact on me and who I am right now,” he said. “It’s given me a lot of opportunities, and I’m forever grateful.”