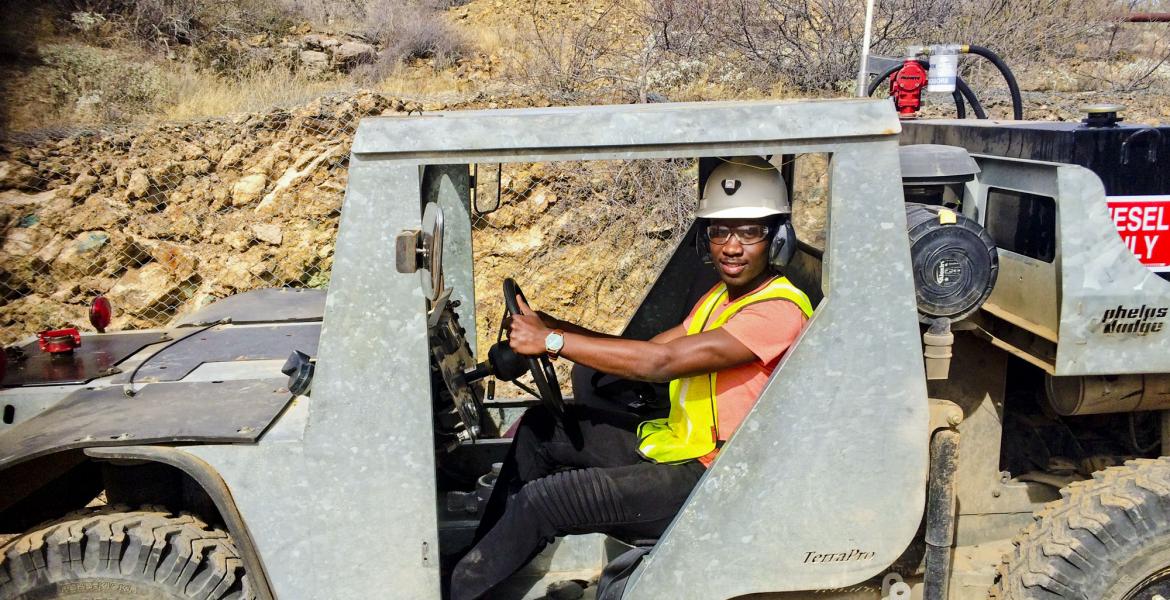 By
Emily Dieckman
Time to read
3 minutes
Print
a- a+
Read so far
Undergrad forges his own path, hoping to foster sustainability and give back to his birthplace. First article in series about diversity and inclusivity in mining engineering at the University of Arizona.

Edson Guebe, 22, hails from a family of Angolan mathematicians and historians. He was 14 years old when he first said goodbye to them and went off to the country’s National Institute of Petroleum to study geology and mining.

“It’s kind of weird when you start talking about rocks when everybody’s just talking about math,” he said, laughing about how his childhood interest stood out. “But they all had faith that I would go and be successful in this field.”

His dad has a PhD in history, his mother is a mathematician, and his brother is in the UK earning a PhD in mathematics applied to neuroscience.

The year he graduated from the institute, Guebe was one of 500 high school students to earn a scholarship from state oil company Group Sonangol to study engineering at a Western university. He spent a year studying English at the University of Alberta and then began looking into mining engineering programs.

Penn State was too cold. The Colorado School of Mines was too isolated. The University of Arizona, specifically the Department of Mining and Geological Engineering, seemed just right.

There is not a better way to build relationships than actually working with people constantly."

Once he got used to the dry heat of the Sonoran Desert, Guebe felt right at home. He started playing soccer at the rec center, got involved with the African Students Association and joined the Society for Mining, Metallurgy & Exploration. Now he is chair of the fundraising committee for the UA’s SME chapter.

“There is not a better way to build relationships than actually working with people constantly,” he said. “Being in SME has helped me grow as a student and a professional.”

Throw in the free meetings, conferences and dinners that connect students with industry professionals and classmates, and SME provides Guebe with opportunities not found elsewhere.

Guebe values the tight-knit group of students, who take classes together, study together and even have Friendsgiving together. He also deeply appreciates the department’s faculty, most of whom have decades of experience and an open-door policy.

“I think they’re doing a better job preparing us for careers after college than many universities do,” he said. “Because they have the experience, the practice professors tend to teach you the skills you really need in the industry.”

Guebe returns the goodwill by sharing his knowledge of economic situations and government policies outside the United States.

“Edson asks really good questions,” said Brad Ross, professor of practice and co-director of the UA Lowell Institute for Mineral Resources, who teaches the course Engineering Sustainable Development. “The fact that he has that different perspective is really beneficial in the class.”

Guebe gained hands-on experience and learned some valuable lessons while interning at the San Xavier Underground Mining Lab in summer 2017. Among them: the importance of safety, value of teamwork and necessity of staying hydrated while working outdoors in Tucson. He has spent most Saturdays for the past few years volunteering as a mine worker in the UA lab and learning about equipment he doesn’t encounter in the classroom.

“He’s very engaged at the mine,” said Moe Momayez, associate professor in the mining and geological engineering department. “He shows up for every shift, he’s very meticulous in the classroom, and he’s very smart.”

Momayez isn’t the only one who recognizes Guebe’s potential. This semester, Guebe landed a position at Freeport-McMoRan’s Oro Valley location as a mining engineering intern.

Do What You Love, Love What You Do

Guebe’s childhood love of rocks has given way to a full-blown passion for mining, especially because he understands the age-old field is only becoming more crucial as time moves forward.

“Knowing that cell phones exist because someone actually went in and mined the minerals that are needed to build a computer is humbling. You’re contributing to the evolution of the human race,” he said.

“Even though we need mining, we also need the planet,” said Guebe. “We have to protect our environment. We have to make sure we leave a better world for our kids and the people who come after us.”

Having survived the cold climes of Canada and the torrid temperatures of Tucson, he feels ready to move anywhere after graduation and eager to enjoy the travel opportunities a mining career will afford him. His appreciation for both the design and operations sides of mining means he’s flexible about his future job descriptions as well.

“Being in the industry is so fascinating to me that I want to contribute wherever I am,” Guebe said. “I think as long as you are respectful, and you are determined, and you are contributing and working hard, it’ll be easier to adapt anywhere.”

Someday, though, he plans to take back to Angola all the lessons he has learned at the UA and from traveling the world.

“It’s always good to give back to the community that saw you growing up,” he said. “We have a lot of room for improvement in Angola, and hopefully I can contribute heavily in the mining sector.”

Coming up in the weekly series “Blasting Through Barriers”