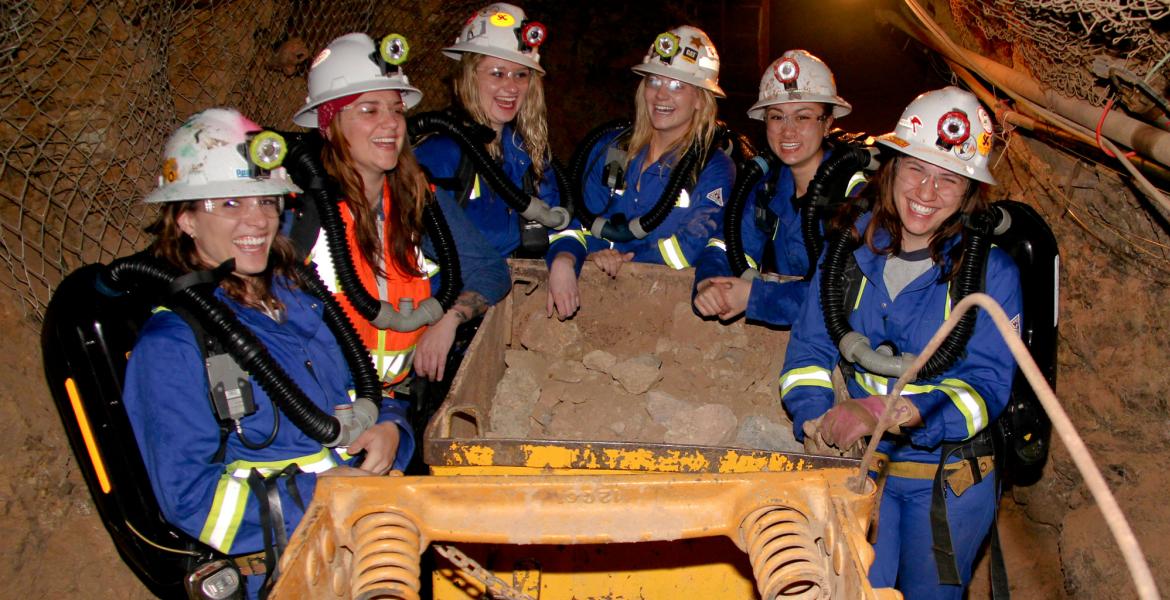 Mining engineering has its hazards and working underground with classmates forges strong bonds not found in other engineering majors. In this series, UA mining engineering students from around the globe tell diverse stories with a common ending: their experiences at UA. Pictured are the women of the UA's female mine rescue team in the San Xavier Mining Laboratory.

By
Emily Dieckman
Time to read
4 minutes
Print
a- a+
Read so far
As they earn degrees from the University of Arizona and put them to use, the men and women featured in this series of articles are defying expectations about who mining engineers are and what they do.

University of Arizona mining engineering students come from all over the world -- from the mineral-rich deserts of Chile to the alluvial diamond deposits of Angola, from the iron ore-filled plateaus of India to the copper mines of our very own Arizona.

They will go on to become geotechnical engineers, metallurgists, mine designers and managers, business executives, and college professors across the globe. Many -- including undergraduates Edson Guebe, who is from Angola, and Miguel Pugmire, who was born in Chile -- plan to take their UA training back home to improve quality of life in other countries.

“My goal is to be part of a corporation that is mining safely and responsibly,” said Guebe.

It takes alumni like Jeff Tysoe, whose parents and grandparents worked in the mines of rural Arizona. It takes people from some of the top schools in the world, like Gaurav Gupta, a graduate student from India. It takes young women like Talita Duarte, a student from Brazil who studied abroad at the UA and was determined to find her way back for graduate school. And it takes trailblazers like Ana Ingstrom, who earned an MS at the University of Arizona decades after being the first woman ever to receive a mining engineering degree from the University of Sonora in Mexico.

“I thought everybody would see me as different, but they saw me in the same way they see everybody,” Ingstrom said. “The mining community is so great. It feels like we are all family.”

Diversity, inherent and acquired, is alive and well in the UA’s Department of Mining and Geological Engineering, where 43 percent of students are from minority populations, 18 percent are female and 10 percent are from other countries. Inherent diversity stems from traits with which a person is born, such as race and gender. Acquired diversity is gained from experiences such as working abroad, speaking multiple languages or serving in the military. A diverse workforce signals success in many industries. In fact, companies with both forms of diversity are more likely to experience market growth, reported a 2013 issue of the Harvard Business Review.

It’s hard to imagine any team succeeding if every player brought the same skills to the field. At the end of the day, we all want to play for a winning team -- one where we’re included rather than isolated, respected rather than disregarded.”

Brad Ross, co-director of the UA Lowell Institute for Mineral Resources, tells how diversity may have prevented damage from the 2013 Manefay failure at Utah’s Bingham Canyon copper mine. The geotechnical team predicted the slide, but not its nature, said Ross, the mine’s technical services manager at the time of the failure. The slide they expected to dilate and stop actually exploded into an avalanche, causing more than 140 million tons of rock to travel a mile and a half in only 90 seconds. Equipment worth hundreds of millions of dollars was destroyed, and the bottom of the open pit was covered in 600 feet of debris.

There were plenty of geotechnical experts on Ross’ team, but they were focused on local conditions and their past experiences with mine failures, so they didn’t consider that the Manefay failure would act like an avalanche found in nature. Only engineers with a different set of experiences or perspectives, such as those from outside the mining industry, could have offered alternatives that would have left the team better prepared to handle the failure and save the equipment.

“Looking back, the only we way we could have prevented the equipment damage was with diversity,” Ross said.

Look for these stories as the weekly series “Blasting Through Barriers” comes to life:

The Lowell Institute for Mineral Resources sponsored a diversity workshop in December 2017 during the Society for Mining, Metallurgy & Exploration’s Arizona conference. Industry leaders, including Greg Boyce -- co-chair of the Lowell Institute, board member of Newmont Mining Corp., and the College of Engineering’s 2013 alumnus of the year -- spoke on the value of diversity.

“It’s hard to imagine any team succeeding if every player brought the same skills to the field,” he said. “At the end of the day, we all want to play for a winning team -- one where we’re included rather than isolated, respected rather than disregarded.”

Leigh Freeman, chairman and co-founder of the nonprofit Fondo Santa Barbara and principal of Leigh Freeman Consultancy, agreed that diversity isn’t just good for people -- it’s good for business. People with different leadership styles and ways of thinking increase diversity of thought and productivity, he said. But too often, the model of what makes a good leader is based on archaic Western ideals.

“Make it more welcoming for people who have different thought process to come in, and when you have one of those people, go out of your way to make sure they’re comfortable,” he said. “The mining industry is probably the best industry in the world to deal with this because of the places we go.”

Diversity allows people to expand their worldviews in more welcoming workplaces, leads to better business and -- as Ross pointed out -- may even mitigate the effect of explosions.

In this series of articles, meet UA mining engineering students and alumni who traveled halfway across the world, found jobs in mining after decades of dreaming about it and even conquered Calculus I on their way to changing the world for the better.