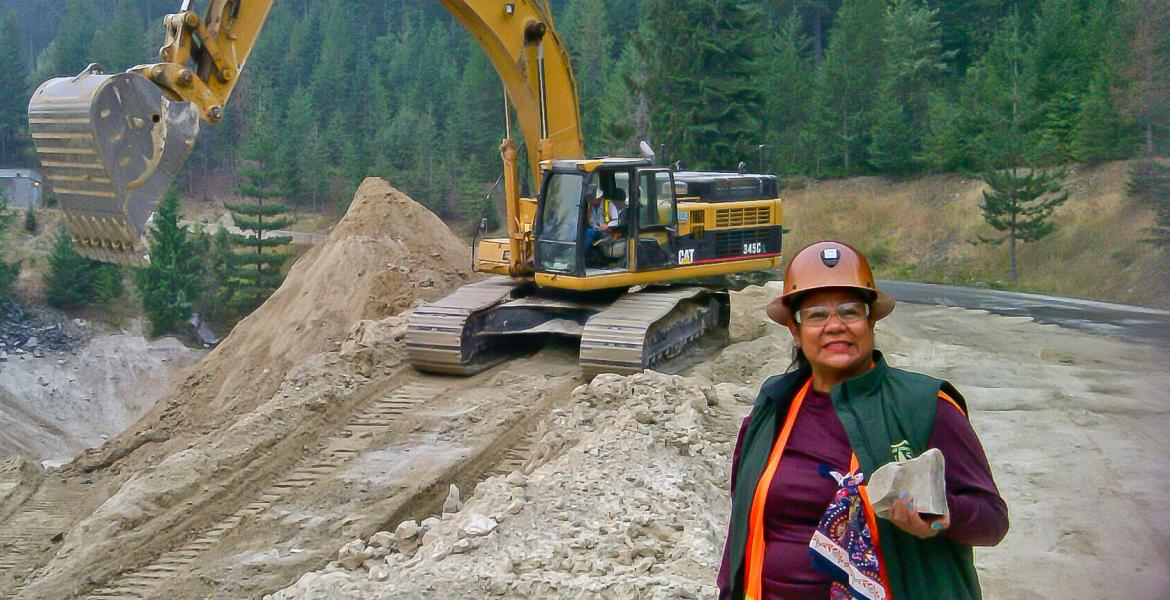 Ana Ingstrom, UA alumna and the first woman to receive a mining engineering degree in Mexico, examines a rock during a day on the job as a mining engineer for the U.S. Forest Service in Colorado.

By
Emily Dieckman
Time to read
4 minutes
Print
a- a+
Read so far
Alumna keeps her head and her heart in the world of mining -- even when life gets in the way. Second article in series about diversity and inclusivity in mining engineering at the University of Arizona.

“Always, my spirit was in someday getting back into mining engineering,” she said. “I was always in contact with my professors in Mexico, I always read magazines about mining, and I was collecting rocks all the time.”

After Ingstrom earned her bachelor’s degree in mining engineering at the University of Sonora, she moved to Tucson with her family and had her third son. She received a job offer from the San Manuel copper mine, but the mine closed shortly after, so Ingstrom decided to go back to school and focus on her family.

She earned a master’s degree in teaching and teacher education at the UA in 2001 and started working adjunct teaching jobs. When her husband left, she turned to minimum-wage jobs with long hours and more stability to support her children, Sergio Barraza-Ingstrom and Ernesto and Alejandro Barraza-Valdez.

She found herself out of a job again when Ernesto, now 25, was a sophomore at the UA. Though the two would later walk at the same College of Engineering graduation ceremony, at the time they were struggling to make the house payment each month. They sat down to talk.

Ingstrom applied to the UA for her second master’s degree.

When she received a letter of acceptance to the graduate program for mining engineering about a month later, she couldn’t believe it. She called to make sure the letter wasn’t a mistake, and even asked the woman on the phone to repeat the confirmation over the speaker so her sons could hear. After a lifetime of seeing his mother denied opportunities, Ernesto said it was a meaningful moment for them all.

“There were a lot of family members who didn’t want her to be an engineer -- they wanted her to be a stay-at-home mom,” he said. “Seeing the acceptance letter, seeing my mom got into it ... well, we had a little celebration.”

“They immediately embraced me. I thought everybody would see me as different, but they saw me in the same way they saw anybody else.”

Ingstrom was overwhelmed by support from her professors, whom she said always kept their office doors open, treated her with respect and patiently answered her questions -- even ones she thought were silly. On her first day of class, University Distinguished Professor Mary Poulton, former director of the Lowell Institute for Mineral Resources and previously head of the UA Department of Mining and Geological Engineering, welcomed Ingstrom warmly.

“They immediately embraced me,” she said. “I thought everybody would see me as different, but they saw me in the same way they saw anybody else.”

Ingstrom’s other worries, about having trouble making friends and not being able to keep up with the physical demands of the program, dissolved as she found herself climbing mountains alongside her classmates.

“The enthusiasm of my classmates and the encouragement from the professors made me feel strong again,” she said. “The environment in the school felt like paradise, like I was finally in my dream come true. It was like being back in a family. I felt like I belonged somewhere again.”

Ingstrom’s adviser, Victor Octavio Tenorio, a professor of practice originally from Peru, said he saw some of himself in this new pupil, who had, like him, come to the United States and pursued higher education in mining.

“Her maturity and her willingness to do things made her even more enthusiastic than some younger people,” he said. “She was very deeply devoted to her career and becoming a working engineer.”

In between forming lifelong friendships and excelling in her classes, Ingstrom joined the UA chapter of the Society for Mining, Metallurgy & Exploration, completed an internship at Tucson-based Professional Minerals Development LLC, worked as a subcontractor for Geotemps Inc.’s 2013 mining exploration season, and served as a contractor and professional consultant for Rosemont Copper. She earned her master’s degree in mining engineering in December 2014, the same semester that Ernesto earned his bachelor’s degree in electrical engineering.

Ingstrom continued to work for Rosemont for a short time after graduation before taking a job with the U.S. Forest Service as a mining engineer in September 2016. She was first stationed at Kootenai National Forest in Montana and then relocated to the Pike and San Isabel national forests in Colorado.

“I like what they do,” she said. “It’s a combination of protection of land and resources with mining engineering.”

Ingstrom loves to talk about her sons’ successes. Ernesto now works at a company in Southern California that develops commercial fusion energy, Sergio earned a master’s degree in comparative literature from Cambridge University, and Alejandro studied biomedical engineering and physics at George Washington University in Washington, D.C. He now works as an engineer for Tucson Electric Power and wants to earn a PhD in physics, and Ingstrom is encouraging him to attend the UA.

Ernesto said he and his brothers are just as proud of their mom as she is of them. After all, she plowed through every obstacle she faced, from making friends to landing a job to finding her strength.

“Now she can hike up mountains,” he said.