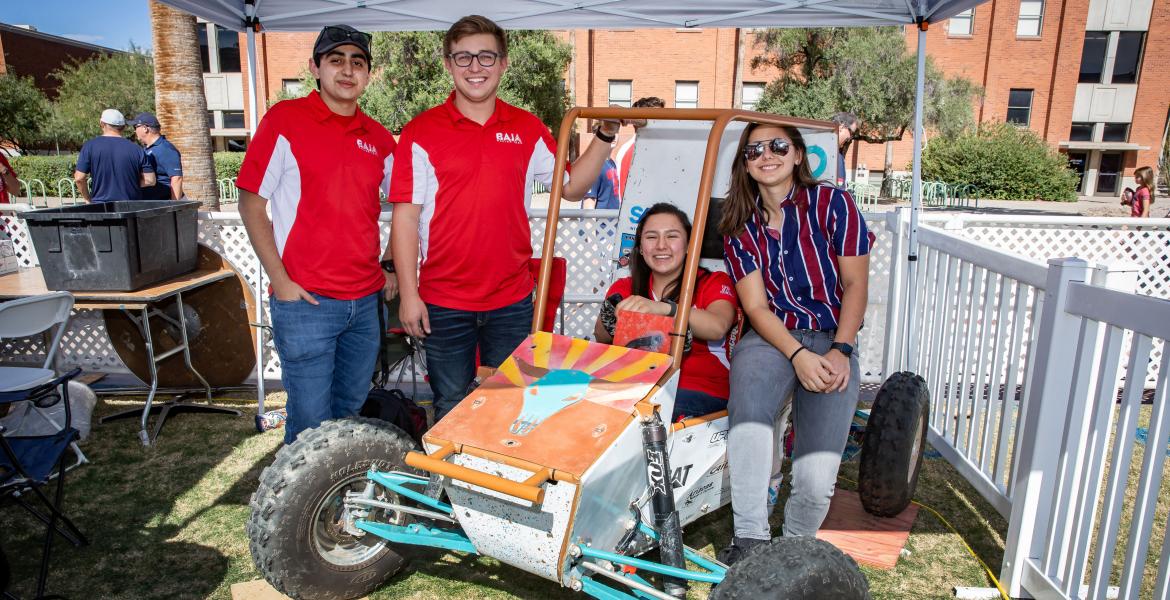 The members of Baja Wildcat Racing show off their vehicle at Homecoming 2019.

By
Ronald Y Pérez
Time to read
3 minutes
Print
a- a+
Read so far
Three engineering student clubs allow present and future Wildcats to apply STEM principles taught in the classroom to designing and building vehicles.

As the designers and builders of so many things around us -- from the structures we live and work in, to biomedical devices that improve our health, to the space vehicles that will help us explore other planets -- engineers drive our world into the future. Three University of Arizona student clubs give the next generation of engineers a chance to do that literally, by taking their STEM skills from the classroom to the racetrack.

“There seems to be a disconnect between what you learn in the classroom and how it applies in real life,” said Amanda Minke, vice president of Wildcat Formula Racing. “Our club allows its members the opportunity to apply what they learn in classes to something physical."

The 16 students in Wildcat Formula Racing design and build a race car from the ground up, and they "are allowed to make mistakes without the consequences,” she said. During the process of building a car, students apply skills such as modeling, prototyping and testing the vehicle to make sure it’s working at its best.

“At its core, it’s a STEM project,” Minke said.

Wildcat Formula Racing is open to all current UA students interested in automotive engineering, which means its members have a diverse range of majors. Minke, for example, is studying environmental sciences. It also serves as a resource for past and future students: club members have helped incoming first-year students choose their courses, and graduating students have said club membership acts as an excellent resume-booster.

“Formula is family,” Minke said. “This club is a place for information sharing, and you make friends that last forever.”

Erik Knowles, president of Baja Wildcat Racing, also known as Baja SAE, knows all too well the importance of club membership when it comes to a job search.

“The university on your resume is no longer enough,” he said. “Being a member of a club like Baja is crucial. Stuff you learn here can be applied to industry -- companies really look for that.”

Each year, Baja Wildcat Racing designs and builds a two-seat Baja-styled car to compete against teams from across the world at Baja SAE International. This April, the competition will take place in Tucson, Arizona, for the first time ever, and the Wildcats will be facing off against more than 100 teams from around the world in dynamic and endurance events. A design report and a sales presentation is also part of the competition. This year’s models are allowed to have four-wheel drive, and the club’s version, which the team started work on in July 2019, will sport a two-gear box that Knowles hopes will propel it to victory.

The team has several sources of support, including industry sponsor Caterpillar, Inc., which allows club members to use the training grounds at the company’s Green Valley facility. David W. Hahn, Craig M. Berge Dean of the College of Engineering, has also reached out to the team to offer support as they prepare for their upcoming competition.

Many of Baja’s members are mechanical engineering students who are applying concepts they learn in the classroom to the hands-on project of building a competition-ready car. For example, they use the modeling software SolidWorks to model the parts of the vehicle before they build them, using tools such as mills, band saws and CNC equipment.

Baja Wildcat Racing is not the only college club ramping up for an upcoming international competition. The Arizona Autonomous Vehicle Club is another design, build and compete team that will battle 78 other teams in June in Annapolis, Maryland.

The club, which has 15 members and three sub-teams in hardware, avionics and computer vision, has a focus on uncrewed air/ground vehicles. The team members often find inspiration in the example of Tesla but also look to explore opportunities with search-and-rescue and package-delivery vehicles.

“We tend to focus on the teamwork experience,” said club president Jonathan Goh. “The club is open to anyone at the school who is willing to learn and work with other people.”

First-year students have the opportunity to learn skills like 3D modeling and printing from juniors and seniors to complement what they’re learning in class. Many members enjoy their work in the club so much that they remain in Tucson after the academic year ends to continue working on projects.

Whether you’re an engineering student, a UA student interested in engineering principles, or even an incoming high school student, these vehicle clubs not only help with current studies, but can also place you on a track to a brighter future.

Recruiting for the clubs begins at the beginning of the fall semester with the Engineering Club Showcase, hosted by the Engineering Student Council. Students are welcome to attend weekly meetings of all three clubs throughout the year to learn more.

For more information about these and other clubs in the College of Engineering, visit the Clubs & Organizations page.