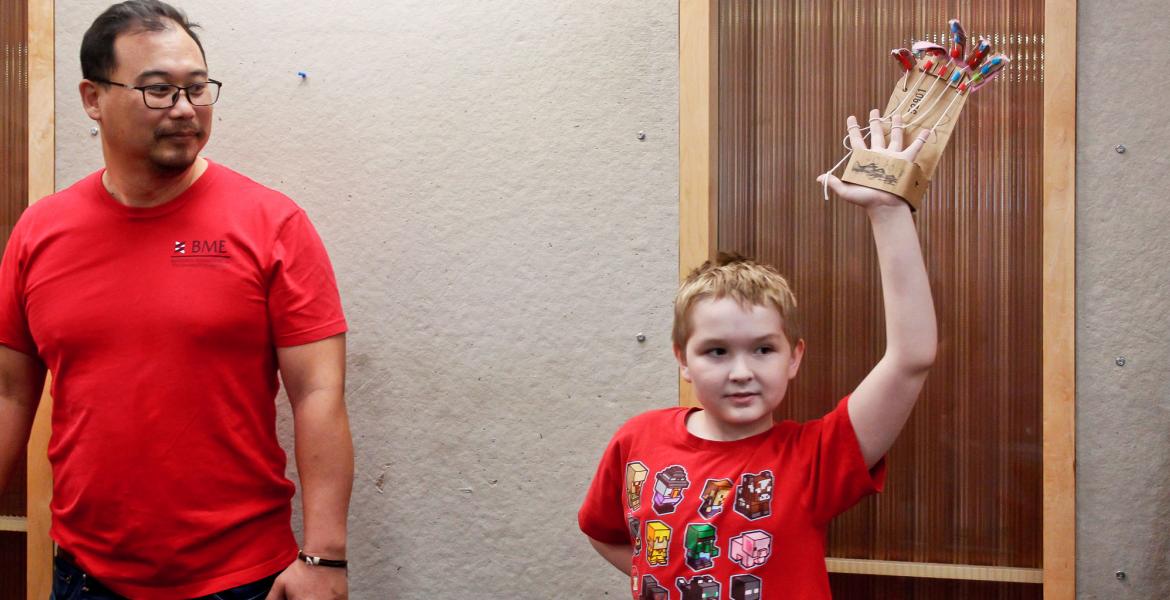 "Raise your hand if you want to come on the lab tour." Biomedical Engineering Society vice president and doctoral student Loi Do, left, prepares for a tour while camp student Johnny Weimer encourages fellow students using the mechanical hand he just built.

By
Emily Dieckman
Time to read
3 minutes
Print
a- a+
Read so far
Students in the University of Arizona Biomedical Engineering Society host hands-on camp for children and adolescents with autism.

After biomedical engineering student Martin Niemiec finished helping a young boy extract DNA from a strawberry and record the results in his lab notebook, he showed him how holding a magnet under a paper plate could manipulate magnetic powder sitting on top of the plate.

“The reason this is cool is because when you’re in your everyday life, there are magnetic fields everywhere,” he explained.

A group of 9- to 16-year-old kids spent their Saturday conducting hands-on experiments in the Biosciences Research Labs building with the help of students in the UA Biomedical Engineering Society. This is the second year in a row that the club partnered with the Autism Society of Southern Arizona and the Department of Speech, Language, and Hearing Sciences for a science, technology, engineering, art and math, or STEAM, camp.

Campers of all scientific knowledge levels were paired with their own club mentors, who helped them build robotic hands, extract strawberry DNA and create patterns with magnets.

“The club is awesome,” said Jennifer Casteix, clinician associate professor of speech, language, and hearing sciences and one of the event’s organizers. “They’re so great. They have given up their Saturday for children that they’ve never met. To me it is such a gift. It really is, because they care about our kids.”

I also remember struggling as a student, and these are kids that struggle. It’s important to help people that can’t get things on the first try.”

The 11 children at the event were engrossed in the science of the event -- creating mechanical hands out of cardboard and string was a favorite, as was the “strawberry smashing” part of the strawberry DNA extraction. But they were also soaking up the opportunity to hang out with other kids like them. The club’s vice president Loi Do said this opportunity for kids to socialize was one of the event’s added benefits.

Jen Weimer said the event was a perfect fit for her son Johnny, age 9.

“What first attracted me was it was science for kids with autism, because he loves science, and it’s hard to find a group where your kid can be himself and still feel accepted,” she said.

The students volunteering at the event were quick to mention that the kids weren’t the only ones enjoying themselves at camp.

“This is fun for me,” said Do, a doctoral student in biomedical engineering, or BME. “I also remember struggling as a student, and these are kids that struggle. It’s important to help people that can’t get things on the first try.”

Alex Burton, another BME graduate student, recalled that similar outreach efforts were what got him interested in engineering when he was younger. In fact, he originally planned to attend medical school, but joining the Biomedical Engineering Society as an undergrad made him change his course.

“Most of these kids are really smart,” he added, gesturing toward one camper-student pair. “This kid is talking about equations for fractals and electrons -- stuff you learn in college.”

College is exactly what some of these kids are gearing up for. Marianna Esposito brought her son Caleb, 16, to the event to see what the UA has to offer.

“He’s actually looking into the pharmacy program at the UA,” she said. “So we thought it would be good to see the campus and the research buildings.”

After kids had completed most of their experiments, Do announced that it was time for a break, or, for anyone who preferred it, a chance to tour some of the laboratories in the BSRL and surrounding buildings. Johnny Weimer paused in his effort to open the door using his newly constructed mechanical hand and cried, “Raise your hand if you want to come on the lab tour!”

Almost all of the young scientists agreed: They’d rather go on a lab tour and learn more about STEAM than take a break.

“It is always incredible to watch young kids with older mentors that are engaged in the same thing,” said Brie Seward, associate director of the Autism Society of Southern Arizona. “The students in the BME club are the best mentors for these kids.”