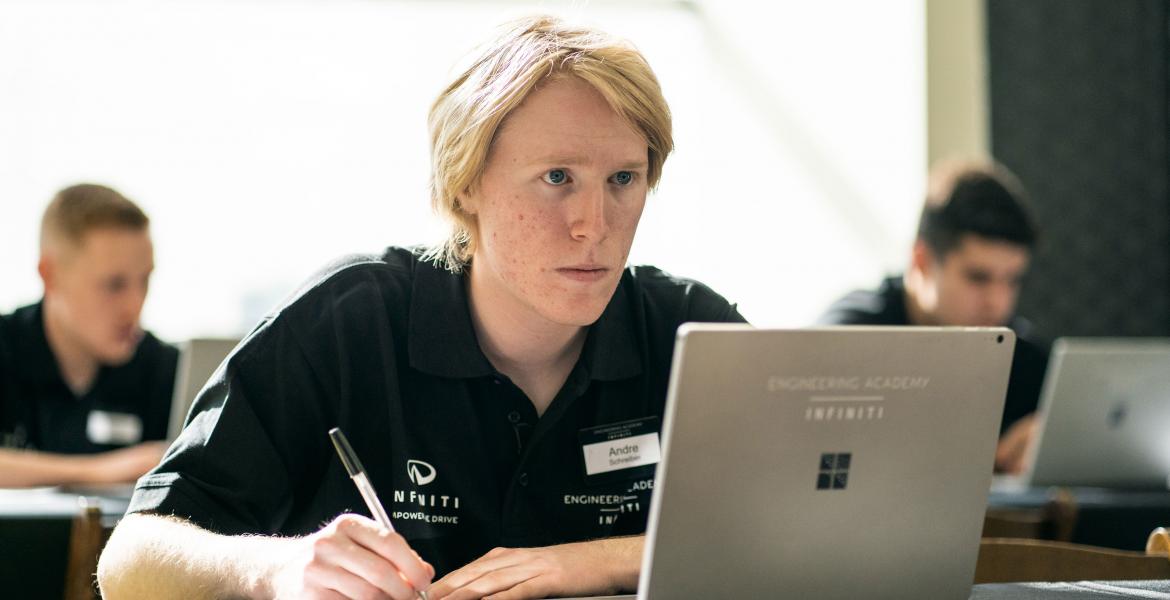 Undergrad Shifts From Surgical Robotics to Formula One Racing

By
Emily Dieckman
Time to read
2 minutes
Print
a- a+
Read so far
UArizona engineering undergraduate among seven students selected internationally to spend a year in the U.K. testing and designing parts for some of the world’s fastest cars.

University of Arizona electrical and computer engineering student Andre Schreiber grew up watching television shows about cars with his dad and playing around with computers. The Sedona, Arizona, native has followed Formula One racing, the highest class of single-seater auto racing in the world, for as long as he can remember. For years, he hoped to one day work with the U.K.-based F1 group and combine his love of cars and electronics. Now that’s one dream Schreiber can stop chasing. In late 2019 he won a coveted spot in an elite racing and automotive program overseas.

Schreiber is headed to the U.K in January 2020 to spend a year with the INFINITI Engineering Academy training in the automotive and motorsport industries. About 3,000 people applied for seven positions, which were awarded by region, and Schreiber was up against more than 350 applicants in the United States.

“I got to compete against some of the best engineers in the country, and just being able to work with them was a great privilege,” said the Honors College student. “I am really looking forward to working with both the Renault F1 Team and Infiniti.”

Schreiber and the other winners, who make up the academy’s seventh cohort, will spend six months alongside the Renault F1 Team at the French automotive company’s technical center in Enstone and six months doing engineering design and testing at Infiniti’s European Technical Center in Cranfield. Half of the academy’s alumni have gone on to full-time positions at Infiniti or in F1.

Getting Up to Speed With Programming

Schreiber was just 17 when he started studying at the University of Arizona. During his sophomore year, he began working with Jerzy Rozenblit, a University Distinguished Professor of electrical and computer engineering and surgery who develops computer-guided training for minimally invasive surgery.

“It’s incredible for me to have such a good student on the project and in the lab,” said Rozenblit.

As an undergraduate research assistant in the Model Based Design Laboratory, Schreiber conducts simulations for laparoscopic surgery, which involves programming machines to perform highly precise movements. He says robotic surgery and vehicle programming are actually quite similar.

“They involve the same skill set. Both try to model physical phenomena and re-create that,” said Schreiber, who has presented posters and papers on his surgical robotics research at National Science Foundation meetings.

Taking the Checkered Flag at Competition

The application process for the academy was rigorous. After taking a math and logic test and attending a video interview, Schreiber and nine other U.S. candidates competed in Nashville. There, he took an exam, completed a decision-making challenge designed by a Harvard professor, went through an intensive interview and built a dragster model vehicle. The competition also tested candidates’ communication skills. They had to field questions from seasoned journalists at a mock press conference.

“Andre demonstrated he was a really worthy winner and achieved some of the highest scores in all the challenges, even being the youngest of the 10 finalists,” said Tommaso Volpe, director of global motorsport and performance projects at Infiniti. “The judges could clearly see a huge amount of potential in him.”

Schreiber, who spent summer 2019 as an IT research and innovation intern at BMW in South Carolina and is a member of the electrical crew on the UArizona Baja Racing Team, will take a year off from school to attend the academy.

“It’s only going to contribute to his education,” Rozenblit said. “It’s a wonderful application of what he’s learning here in the College of Engineering, and he’ll be using his skills in top-tier automotive racing.”