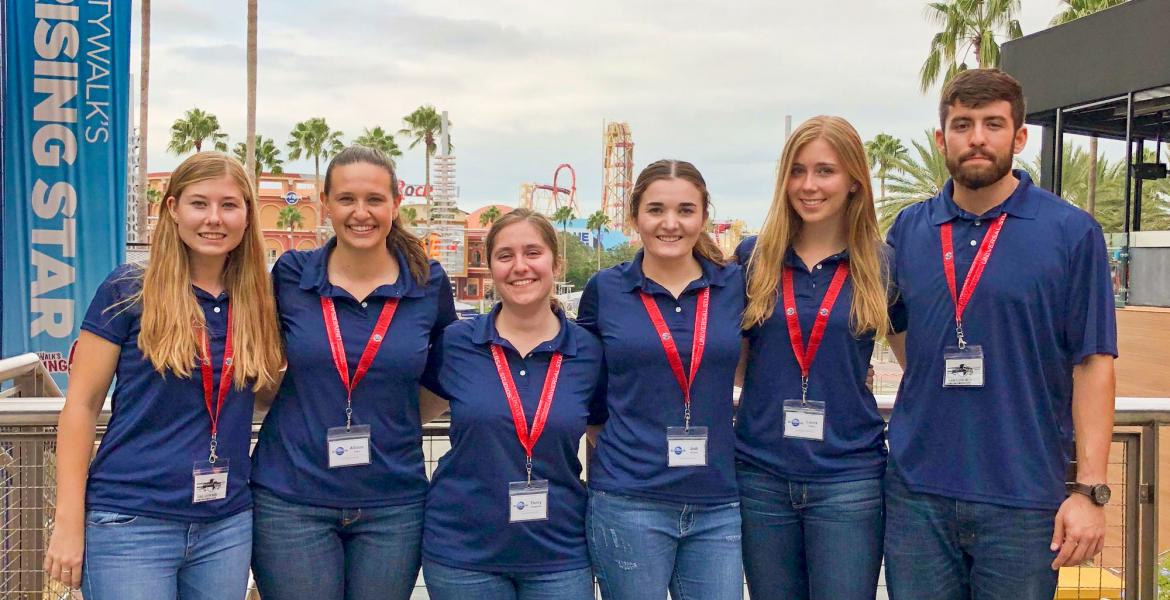 By
Emily Dieckman
Time to read
3 minutes
Print
a- a+
Read so far
Members of a new University of Arizona club let loose their talents at an Orlando design challenge.

The College of Engineering’s newly formed Theme Park Entertainment Group at the University of Arizona, also known as the Coaster Cats club, gives students the opportunity to design their own roller coasters and theme park attractions.

In fact, last semester, with only a few weeks to enter the competition, book flights and plan their trip, the group of six engineering seniors who started the club competed in -- and triumphed in several categories of -- a roller coaster design competition in Orlando, Florida. Universal Creative, a research and development group that designs rides and attractions for Universal Studios Theme Parks, hosted the Ryerson Invitational Thrill Design Competition in November 2017.

Senior Tierny Rubenow, president of the club, chose to major in electrical and computer engineering in hopes of becoming an “imagineer,” one of the engineers behind the design and construction of Walt Disney theme parks.

“That’s been my dream since at least middle school,” she said. “Well, a realistic dream. But I remember being in first grade, telling my mom I wanted to be an imagineer,” she said.

In October 2017, Rubenow attended an ASTM International conference in Scottsdale, which she had heard about through her senior design class. ASTM is a leader in developing safety standards for everything from toys to aircraft to roller coasters. There, she met fellow UA students Allison Katz and Jesse Deffenbaugh, both mechanical engineering majors who were also intrigued by roller coaster design.

She also met Kathryn Woodcock, creator of the Ryerson Invitational and director of the Tools for Holistic Ride Inspection Learning and Leadership, or THRILL, Laboratory at Ryerson University in Toronto. Woodcock started the competition to give students a chance to learn about the industry and showcase their problem-solving skills to potential employers.

It was a Friday afternoon when the students first heard about the competition, and Woodcock told an eager Rubenow, Katz and Deffenbaugh they would need to decide whether they were attending by the following Wednesday. Rubenow spent her Monday asking professors -- and anyone else she could think of -- how she might be able to fund the trip.

She approached Regents’ Professor Michael Marcellin, who had taught her Basic Circuits class, and he asked the group to create a proposal. The students threw together a pitch, presented it to Marcellin, and received $3,000 to cover travel and registration expenses.

Marcellin had funds available through a faculty endowment and is a major proponent for hands-on student experience through clubs. His only conditions were that the group form an official club after the competition and submit a paper to the International Telemetering Conference, which Marcellin attends -- and pays for students to attend -- each year.

“When I see a worthy cause, I help out,” he said. “I’m in the position where I can afford it.”

In a whirlwind few weeks, Rubenow, Katz and Deffenbaugh added Nicole Gefrides, a systems engineering major, and Jodi Rickel and Laura Camp, electrical and computer engineering majors, to their group; dubbed themselves the Coaster Cats; and flew across the country for the design competition.

The challenges presented to the eight participating universities ranged from safety upgrades to queue accessibility and themed land modeling, all involving the improvement of flawed designs.

“There was a good mix of technical engineering challenges and artistic behavioral shaping challenges,” Rubenow said.

Arizona's team reflected confidence and clarity in their presentation, which is critical to transforming a good idea into reality."

The Coaster Cats placed third in safety improvement, second in accessible design and first in roller coaster design. They also tied for second place in overall technical challenges and tied with three other teams for second overall in the competition.

Not bad for a team whose strategy was, according to Katz, “We’ll figure it out when we get there.”

Woodcock said because there is little formal curriculum in the field of roller coaster design, team performance tends to depend more on group members’ passion than their level of experience.

“Arizona’s team reflected confidence and clarity in their presentation, which is critical to transforming a good idea into reality,” she said.

In 2018 the group plans to reach out to students in other areas, such as art and architecture, to balance the yin of creativity with the team’s yang of technical skills.

They’re even considering having an in-club competition where members design and present roller coasters to practice for the 2018 Ryerson competition. The club also plans to become part of the Themed Entertainment Association. Beyond that, one can only imagine what they’ll do. Or maybe it’s best to leave that up to those who will be doing the imagineering.

If you are interested in becoming a Coaster Cat, email recruitment coordinator Allison Katz at tpegua@gmail.com.