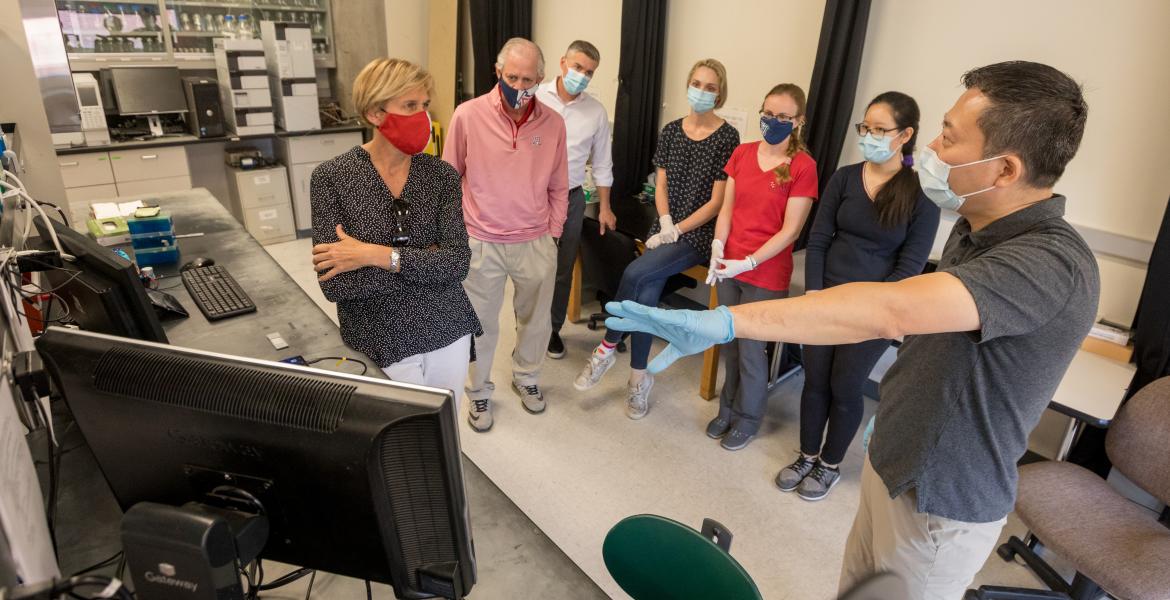 By
Emily Dieckman
Time to read
3 minutes
Print
a- a+
Read so far
The new test uses a smartphone microscope and could deliver results in about 10 minutes.

Researchers at the University of Arizona are developing a COVID-19 testing method that uses a smartphone microscope to analyze saliva samples and deliver results in about 10 minutes.

The UArizona research team, led by biomedical engineering professor Jeong-Yeol Yoon, aims to combine the speed of existing nasal swab antigen tests with the high accuracy of nasal swab PCR, or polymerase chain reaction, tests. The researchers are adapting an inexpensive method that they originally created to detect norovirus – the microbe famous for spreading on cruise ships – using a smartphone microscope.

They plan to use the method in conjunction with a saline swish-gargle test developed by Michael Worobey, head of the UArizona Department of Ecology and Evolutionary Biology and associate director of the University of Arizona BIO5 Institute.

The team's latest research using water samples – done in collaboration with Kelly A. Reynolds, chair of the Department of Community, Environment and Policy in the UArizona Mel and Enid Zuckerman College of Public Health – is published today in Nature Protocols.

"We've outlined it so that other scientists can basically repeat what we did and create a norovirus-detecting device," said Lane Breshears, a biomedical engineering doctoral student in Yoon's lab. "Our goal is that if you want to adapt it for something else, like we've adapted it for COVID-19, that you have all the ingredients you need to basically make your own device."

Yoon – a BIO5 Institute member who is also a professor of biosystems engineering, animal and comparative biomedical sciences, and chemistry and biochemistry – is working with a large group of undergraduate and graduate students to develop the smartphone-based COVID-19 detection method.

"I have a couple of friends who had COVID-19 that were super frustrated, because their PCR results were taking six or seven days or they were getting false negatives from rapid antigen tests. But when they got the final PCR tests, they found out they had been sick, like they'd suspected," said Katie Sosnowski, a biomedical engineering doctoral student who works in Yoon's Biosensors Lab. "It's really cool to be working on a detection platform that can get fast results that are also accurate."

Traditional methods for detection of norovirus or other pathogens are often expensive, involve a large suite of laboratory equipment or require scientific expertise. The smartphone-based norovirus test developed at UArizona consists of a smartphone, a simple microscope and a piece of microfluidic paper – a wax-coated paper that guides the liquid sample to flow through specific channels. It is smaller and cheaper than other tests, with the components costing about $45.

The basis of the technology, described in a 2019 paper published in the journal ACS Omega, is relatively simple. Users introduce antibodies with fluorescent beads to a potentially contaminated water sample. If enough particles of the pathogen are present in the sample, several antibodies attach to each pathogen particle. Under a microscope, the pathogen particles show up as little clumps of fluorescent beads, which the user can then count. The process – adding beads to the sample, soaking a piece of paper in the sample, then taking a smartphone photograph of it under a microscope and counting the beads – takes about 10 to 15 minutes. It's so simple that Yoon says a nonscientist could learn how to do it by watching a brief video.

The version of the technology described in the Nature Protocols paper makes further improvements, such as creating a 3D-printed housing for the microscope attachment and microfluidic paper chip. The paper also introduces a method called adaptive thresholding. Previously, researchers set a fixed value for what quantity of pathogen constituted a danger, which limited precision levels. The new version uses artificial intelligence to set the danger threshold and account for environmental differences, such as the type of smartphone and the quality of the paper.

The researchers plan to partner with testing facilities at the University of Arizona to fine-tune their method as they adapt it for COVID-19 detection. Pending approval of the university's institutional review board, students who are already being tested on campus through other methods will have the option to provide written consent for their sample to be run through the smartphone-based testing device as well. Ultimately, the researchers envision distributing the device to campus hubs so that the average person – such as a resident assistant in a dorm – could test saliva samples from groups of people.

"Adapting a method designed to detect the norovirus – another highly contagious pathogen – is an outstanding example of our researchers pivoting in the face of the pandemic," said University of Arizona President Robert C. Robbins. "This promising technology could allow us to provide fast, accurate, affordable tests to the campus community frequently and easily. We hope to make it a regular part of our 'Test, Trace, Treat' strategy, and that it will have a broader impact in mitigating the spread of the disease."

Yoon and his team are also working on another idea, based on a 2018 paper they published in Chemistry—A European Journal, which is even simpler but leaves slightly more room for error. It involves the same technology, but instead of a smartphone microscope and specially designed enclosure, users would only need to download a smartphone app and use a microfluidic chip stamped with a QR code.

"Unlike the fluorescent microscope technique, where you get the chip into just the right position, you just take a snapshot of the chip," said biomedical engineering master's student Pat Akarapipad. "No matter the angle or distance the photo is taken from, the smartphone app can use AI and the QR code to account for variances and run calculations accordingly."

The method requires no training, so, if perfected, it could potentially allow students to pick up microfluidic chips from a campus location and test their own samples.

The team is also working with other members of the university's COVID-19 testing group, including Deepta Bhattacharya, an associate professor in the Department of Immunobiology.