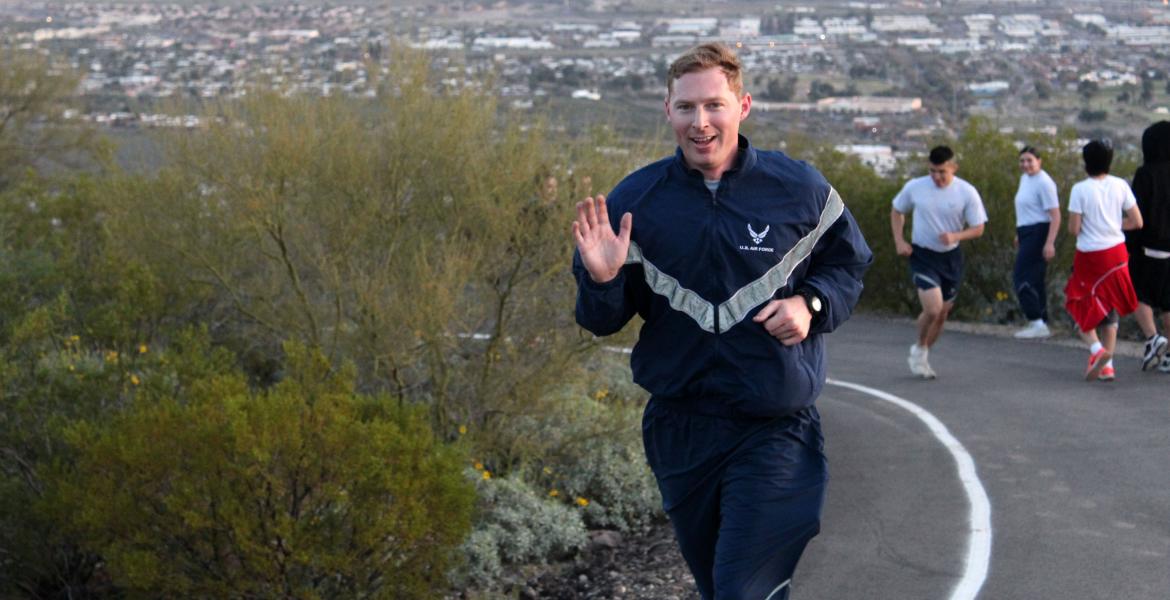 The American Society of Engineering Education Military and Veterans Division recognized the University of Arizona for its commitment to serving veteran students, such as Ryan Raettig, seen here running up Tumamoc Hill as part of his Air Force ROTC training as a UArizona student.

By
Emily Dieckman
Time to read
2 minutes
Print
a- a+
Read so far
The college is dedicated to serving those who serve, as recent alumnus Ryan Raettig’s journey demonstrates.

While he was earning his bachelor’s degree in electrical and computer engineering from the University of Arizona, 2nd Lt. Ryan Raettig wasn’t just balancing homework and his job as a math tutor. The Air Force veteran was also juggling a transition back to civilian life, his role as a new father and leadership responsibilities in the Air Force ROTC.

“I have nothing but good things to say about the UA,” Raettig said. “From my experience, the professors are excellent, and the student population is really accepting of veterans. I know a lot of veterans, when they go to school, maybe feel out of place, but I always felt acceptance.”

The American Society of Engineering Education Military and Veterans Division recently recognized the university with an Engineering Excellence for Veterans Award. The award was given to only three institutions of higher learning in 2019, for outstanding support of veterans transitioning out of the military and into careers in engineering and engineering technology.

“The College of Engineering is extremely proud of this recognition, especially as we were one of only three institutions to receive the recognition nationally,” said David W. Hahn, Craig M. Berge Dean of the college. “In keeping with our mission of accessibility, we take seriously our obligation to serve our veterans. This is a team effort that extends well beyond the college.”

“This is a tremendous recognition for the College of Engineering and the University of Arizona,” he said. “Our mission and values embody our commitment to serving our military and veteran student population, and this award is evidence of this commitment.”

The University also jumped 34 spots in the Military Times’ “Best for Vets” ranking in 2019, finishing No. 18 overall and No. 15 among public universities. The rankings were based primarily on university culture and student support, with academic outcomes, cost and financial aid also considered.

Back to School at UArizona

Raettig attended college for a year in Wisconsin after graduating from high school, and then he went into the U.S. Air Force. Four years later, he was stationed at Davis-Monthan Air Force Base in Tucson, Arizona. After taking a few calculus classes at Pima Community College, he paid a visit to UArizona and loved it so much that he transferred from active duty to the reserves to attend full time. He chose to study electrical and computer engineering because it was similar to the avionics work he’d enjoyed in the Air Force.

Once enrolled for fall 2016 and settled into his job as a math tutor, Raettig found himself missing the routine of active duty. So he joined the university’s Air Force ROTC in spring 2017, where he held positions ranging from academics and mentorship officer to vice wing commander.

Raettig, who graduated in May 2019, also cited UArizona Veterans Education and Transition Services, or VETS, as a helpful resource. Graduation rates for students who use the program’s services -- which include a peer support network and specialized financial guidance -- exceed 90%. For Raettig, one of VETS’ most valuable offerings was simply a place to go.

“The VETS Center was amazing,” he said. “It was really nice to go between classes. The majority of veterans who go to school aren’t staying in the dorms -- they’re commuting. So that’s a huge thing, having somewhere you know you’re going to have a chair available to work on homework.”

Today, Raettig is a commissioned engineering officer at the Air Force Institute of Technology, where he’s earning a master’s degree in electrical and computer engineering. He also recently won the AFCEA Major General Robert E. Sadler ROTC Award, an honor given to only one cadet per year nationally.

“The UA’s veterans center is one of the best in the country,” said Raettig. “And as far as the College of Engineering, a lot of people are going back to school or are veterans. Just the fact that a lot of people are in the same boat means you aren’t going to feel out of place.”