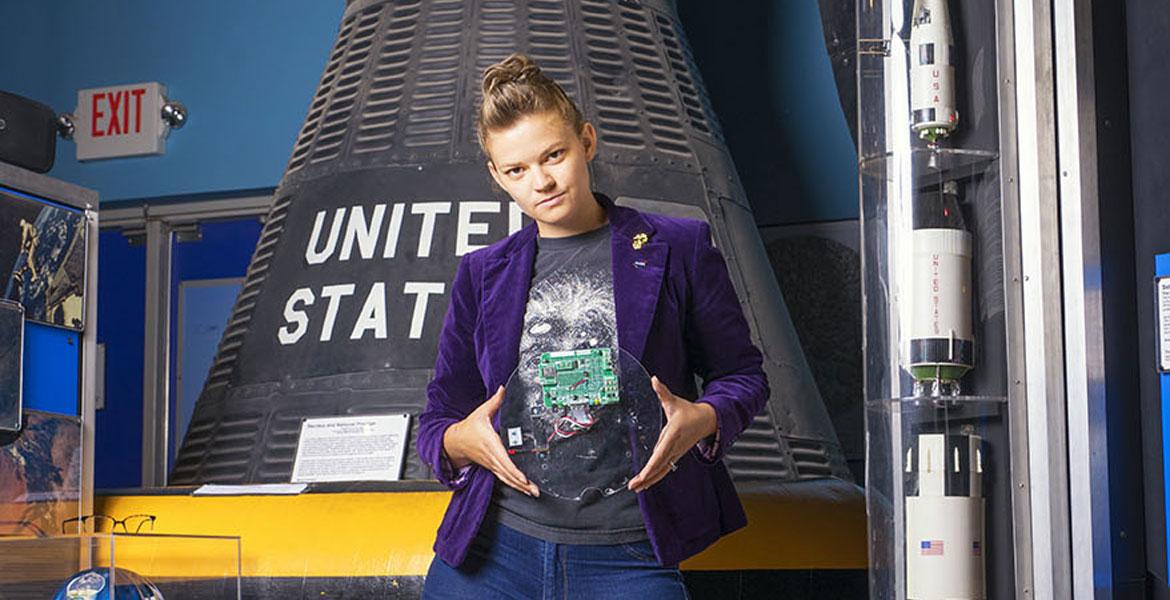 Roslyn Norman: “A lot of people don’t see the creative side of engineering." (Photo: Patricia Fortlage)

Marine Corps Veteran Forges Her Own Path at the UA

By
Emily Dieckman
Time to read
2 minutes
Print
a- a+
Read so far
Communication skills, creative problem-solving and a lot of hard work are the keys to success for this tenacious engineering student.

Roslyn Norman will try just about anything, as long as she can go about it in her own way.

But scholarships were hard to come by in Mohave Valley, Arizona, so Norman started brainstorming early in life about how to get a higher education, ultimately enlisting in the military after high school and using the GI Bill to pay for college.

“I’m really impressed with 18-year-old me,” said the 26-year-old UA mechanical engineering student. “I made a 10-year plan back then and stuck to it.”

Norman served four years in the Marine Corps, including a stint forecasting weather in Japan. She thought about pursuing an education in the arts, such as theater or photography. But she couldn’t help but notice that the most successful members of her family had one thing in common: They were engineers.

Polar opposites? Not in her view.

“A lot of people don’t see the creative side of engineering, but that’s really what it is: You have to creatively problem-solve to make something better than what you started with,” she said. “And you have to able to communicate well too.”

Norman spent a semester brushing up on math and chemistry and then took her first engineering course at Pima Community College in Tucson. She programmed her first robot in PCC’s Engineering Club and designed particle-sampling tools as part of the NASA-funded, statewide ASCEND! balloon-satellite program.

“Without Roslyn, the Engineering Club would not have been such a success,” said Pat Trainor, director of program operations at club sponsor JobPath. “She actively recruited a number of other women (and men) to become involved by doing presentations in all the engineering classes at PCC.”

During one particularly hectic semester, in which she was balancing a part-time job with more classes than ever before, Norman withdrew from Calculus II and decided to take a different track.

“That’s when I became a math tutor,” she said. “I thought, ‘Math will not defeat me! I will become a master!’ And I was fairly good at it. Because math was not something I naturally excelled at, I had to break it down into simple steps for myself and that made it easier to communicate complicated math concepts to my tutees.”

Norman took off from there, acing Calculus II and courses in differential equations and electricity and magnetism. Next, she participated in the Research Experience for Undergraduates, a program grant shared between UA and PCC, where she interned with the Steward Observatory Solar Lab. There she was able to assist with the High Elevation Antarctic Terahertz, or HEAT, telescope project.

Norman’s transition from PCC to UA was the kind of experience she thrives on: a challenge. She came from an environment in which she took a variety of classes and had time for a job and extracurricular activities to one in which the majority of her time was consumed by course work. She was grateful to win a da Vinci scholarship through the College of Engineering but was still searching for a school-work-life balance.

In fact, while interning at Paragon Space Development Corp. and taking a full schedule of upper-division engineering courses in fall 2017, Norman became overwhelmed with her responsibilities and considered dropping out of school entirely. This is when John Turner, her engineering component design instructor, stepped in to tell her she was too capable to quit.

“Honesty, good work ethic and attitude are bigger factors than just pure academic ability,” he said. “Folks like her, who have those attributes, make excellent employees and will do very well.”

Once again, Norman opted to do it her way. She picked up a new minor in studio art and a new lease on life to go with it. She’s on track to finish her degree in 2020 and says she might become an instructor someday to help other students find success.

“I’ve always loved a challenge, and that is what led me here,” Norman said, thinking back to how, even in high school, she was never a natural athlete -- she just pushed herself to become one. “That was the beginning of me thinking, ‘Oh, I like challenging myself. That’s what I’m going to do now.’”