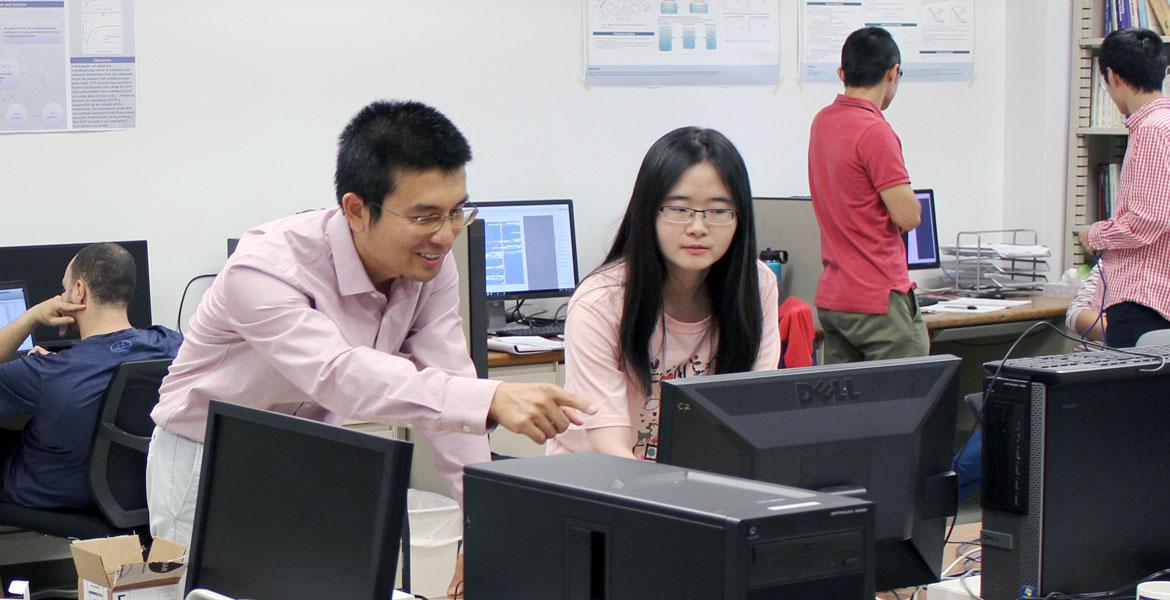 By
Emily Dieckman
Time to read
2 minutes
Print
a- a+
Read so far
Ming Li recognized for mentoring students and mitigating cybersecurity threats.

Ming Li, an associate professor in the University of Arizona Department of Electrical and Computer Engineering, conducts cybersecurity research that aims to keep everything from smartphones and laptops to driverless vehicles and drones safe from hackers. In 2019, the UA Office of the Provost named him a Distinguished Scholar for outstanding contributions in teaching, research and outreach. Only three to four mid-career faculty are selected for the honor each year.

“I feel very lucky to receive this award,” Li said. “We’ve done many years of work on wireless networks and cybersecurity. These are issues that affect every aspect of our lives.”

Li arrived at the UA in 2015 after receiving his PhD in electrical and computer engineering from Worcester Polytechnic Institute and serving as an assistant professor in Utah State University’s Department of Computer Science. He’s already racked up a list of accomplishments, including a National Science Foundation Faculty Early Career Development Award in 2014, an Air Force Office of Scientific Research Summer Faculty Fellowship in 2015 and an Office of Naval Research Young Investigator Award in 2016. He is also a senior member of IEEE, and has authored or co-authored more than 100 publications.

“Dr. Li’s contributions to advancing secure networks and cyberspace security have shown great promise and are proving to be of importance on a global scale,” wrote department Head Tamal Bose in his recommendation letter. “He is an asset to the ECE department and to the University of Arizona.”

Cybersecurity is increasingly important as the world moves into a time where the “internet of things” has people and their devices more connected than ever. Beyond making it possible to browse the web on computers and smartphones, wireless networks are used in wearable sensors such as Fitbits, household smart appliances that regulate conditions like temperature and humidity, health care devices such as cardiac defibrillators, and driverless vehicles.

Li’s mission is to make the devices and the communication among them more secure, without a need for users to manually set up and keep track of multiple passwords, which, when they are hard for hackers to crack, are also difficult for users to remember. One method involves using a single, highly secure helper device, such as a smartphone or laptop, placed in the vicinity of other devices before they can join a network. Other, lower-end devices, such as Fitbits and “internet of things” sensors, need to prove their proximity with this device to join the network.

“We outsource the security to another, more powerful device, like your smartphone,” Li said. “If you already set up a secure password on your smartphone, for example, you can use this secure link to bootstrap other devices onto the network.”

Li’s cybersecurity methods also have implications for protecting uncrewed aerial systems from hackers and protecting airspaces, such as those around airports or private properties, from drones flying where they shouldn’t. On the ground, he and collaborators from Virginia Tech are investigating security in the control of and communication between platoons of autonomous vehicles. These vehicles follow one other in close formation, with the goal of increasing road capacity and fuel efficiency and decreasing congestion.

“If someone remotely hacks into a vehicle in a platoon on a highway, they can control everything from the engine to the brakes, changing the behaviors however they desire,” Li said. “If they make the vehicle behave erratically, they can disturb the whole platoon and lead to congestion or collisions.”

Li doesn’t just help vehicles and smart devices perform effectively -- he helps his students excel too. He is currently supervising nine PhD students, and many of his former graduate students are now in tenure-track faculty positions. He mentors and provides research opportunities for undergraduate students as well.

“A faculty member should be an effective and well-prepared instructor with an excellent grasp on relevant subjects and the ability to communicate that knowledge, while also motivating and guiding students,” Bose said. “Dr. Li possesses all of these characteristics.”