By
Jill Goetz
Time to read
2 minutes
Print
a- a+
Read so far
Erica Corral and Armin Sorooshian are the first pair of researchers from the same college to be appointed University of Arizona Distinguished Scholars.

For the first time, the University of Arizona has chosen two faculty members from within the same college to receive the UA Distinguished Scholar Award, and both of them are engineers. 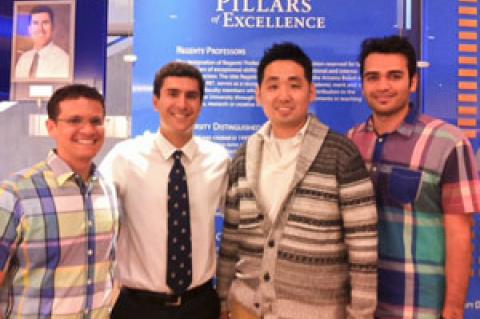 "We are enormously proud to have two junior faculty in our College earn this prestigious award from the University in 2016," said Jeff Goldberg, College of Engineering dean. The awards include $10,000.

Corral and Sorooshian were among several faculty and staff recognized at an awards ceremony on campus April 14. Honorees included 2015 Regents' Professors and Distinguished Professors, the highest titles the University bestows on faculty.

In introducing the Distinguished Scholars, UA provost and senior vice president for academic affairs Andrew Comrie said, "Our next awards are aimed at the rising generation of faculty -- those who we expect to become Regents' Professors and Distinguished Professors in the coming years."

The UA established the annual Distinguished Scholar Awards in 2012. Winners are selected by a campuswide committee of Regents' and Distinguished Professors.

"I am delighted to be nominated and recognized by my colleagues for this prestigious award," Corral said. "I am thankful for the continued support from the University to pursue my academic and scholarly activities."

Erica Corral conducts research on high-temperature materials for use in extreme environments, including space exploration, with a special furnace that can reach 2,000 degrees Celsius.

She and her students are developing ceramic and composite materials for coatings on aerospace vehicles, including the space shuttle, that can withstand extremely high temperatures without losing their shape or integrity, and nanocomposite materials with novel electrical and thermal properties for enhancing fuel efficiency and solar energy production.

She has received a National Science Foundation Career Award and a Young Investigator Award from the Air Force Office of Scientific Research; published more than 40 articles, chapters and conference proceedings; and patented three products, with more under review.

Her popular STEM-education programs include summer "Materials Magic Shows" to motivate Hispanic girls and women to pursue science and engineering education and careers. She has received the Outstanding Faculty Award at the Student Interface from students in her department.

Chemical Engineering in the Cloud

Armin Sorooshian studies how aerosol particles interact in the atmosphere, particularly with clouds. The research has major implications for human and environmental health and monitoring climate change.

"I am honored by this recognition and continued support by UA of my work, especially since it was here in the College of Engineering that I received my undergraduate training to help me reach the point I am at now," he said. "I care deeply about our students, and they are the heartbeat that drives me in my teaching, research and outreach activities."

Sorooshian is leading several multi-university research projects for the U.S. Navy and NASA. For the past several summers, he and his graduate students have conducted aerosol and cloud sampling on board various aircraft across the continental United States and off the California coast. They have compared their results with models and satellite data, with the goal of improving the ability to forecast pollutants’ impact when they are emitted into the atmosphere.

Last July, he led experiments to better understand how particulates emitted from the ocean interact with other airborne particulates and gases. This July he'll return to Monterey to study the formation, persistence and dissipation of fog, which has implications for weather forecasting, visibility and coastal ecology.

Sorooshian received a Young Investigator Award from the Office of Naval Research in 2010. He has authored and co-authored 67 peer-reviewed papers and been invited to participate in National Academy of Sciences/National Academy of Engineering symposia eight times.

He is a three-time winner of the Outstanding Faculty Award at the Student Interface. Sorooshian earned his bachelor's degree in chemical engineering from the UA in 2003 and master's and doctoral degrees in the field from the California Institute of Technology in 2005 and 2008. He joined the UA faculty in 2009.

Also honored on April 14 were 12 UA Student Scholars, including Jeannie Wilkening, a senior in the Honors College majoring in chemical and environmental engineering who was one of two UA students nationwide -- also both in the College of Engineering -- named 2016 Churchill Scholars.