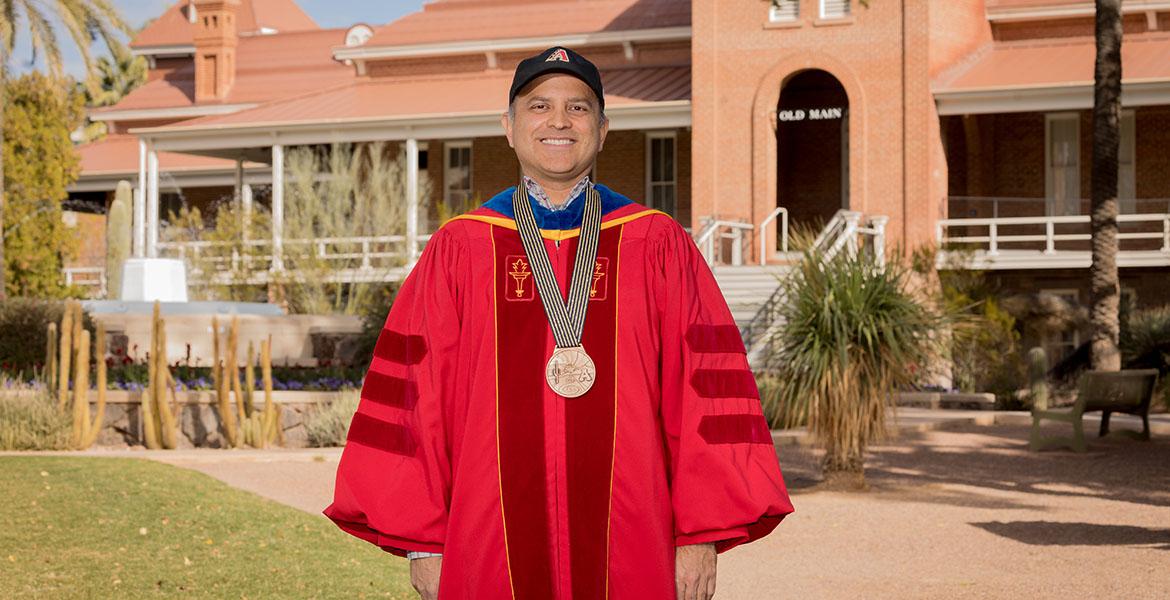 By
Katy Smith
Time to read
2 minutes
Print
a- a+
Read so far
Ricardo Valerdi received the award for his work with international collaborators to make software reuse more efficient and cost effective.

Cost estimation expert Ricardo Valerdi, a University of Arizona Distinguished Outreach Professor of systems and industrial engineering, traveled to Spain in late March to work with a research team based at the University Carlos III of Madrid, or UC3M, which specializes in informatics – the study of the structure, behavior and interactions of computer systems. The international group, which also includes a collaborator from the University of Piura in Peru, is developing a research paper and a planning tool for those analyzing the pros and cons of software reuse. Their analysis will help developers determine the potential cost savings associated with reusing software.

Taking parts of software code originally developed for one product and using them for a new project offers economic benefits, but can also bring drawbacks and isn’t always practical, said Valerdi. Some software is too old to be reused, written in a software language that’s incompatible with modern systems, or of such poor quality that it is not worth fixing. If software code is poorly written, it would require extensive repair to eliminate bugs and defects. Sometimes the defects are more costly to fix compared to creating the software from scratch. He advises thorough planning and sees a need for this type of analytical tool across industries and in both the public and private sectors.

“Software is everywhere,” he said. “So understanding software projects and their economics is becoming increasingly important because we depend on it for everything – financial transactions, transportation, education. Even our health records are on a computer system.”

The Fulbright program, which operates in over 160 countries worldwide, is the flagship international educational exchange program sponsored by the U.S. government and is designed to build lasting connections between the people of the United States and other countries. Fulbright Specialist Award recipients are selected on the basis of their achievements, leadership and potential to foster long-term cooperation between institutions in the United States and abroad.

Valerdi, who speaks Spanish fluently and spent part of his childhood in Mexico, has long been internationally minded. He was inducted into the Mexican Academy of Engineering in 2017, following in the footsteps of his father, Jorge Valerdi, and uncle, Jose Albarrán. He has also been a visiting fellow of the U.K. Royal Academy of Engineering, the University of South Australia, and Polytechnic University of Madrid.

He met his research collaborators in 2017 when he visited Polytechnic University of Madrid during a sabbatical and gave a talk on developing cost models. The group is led by professor Juan Llorens of UC3M’s computer science department. Llorens and his colleagues saw connections between Valerdi’s research and theirs and began discussions about working together. The group’s accepted proposal for the Fulbright Specialist Program allows Valerdi to spend two weeks in Madrid and return for another two weeks in May. Llorens is also considering a visit to the UA in 2023.

“It’s great to see the commonality in interest,” said Valerdi of working with partners outside the United States. “It’s been extremely fruitful for me because, even though they’re halfway around the world, they’re working on similar problems and research.”

Valerdi is teaching a cost estimation class and looks forward to leading the class from UC3M through videoconference. The founder and chief scientist of Science of Sport, a nonprofit focused on STEM outreach for youth, is eager to share with students in real time what he learns overseas.

“It’s helpful to give students exposure to the rest of the world. That can be done through us, through Fulbright. We can bring that worldview to the classroom,” he said.