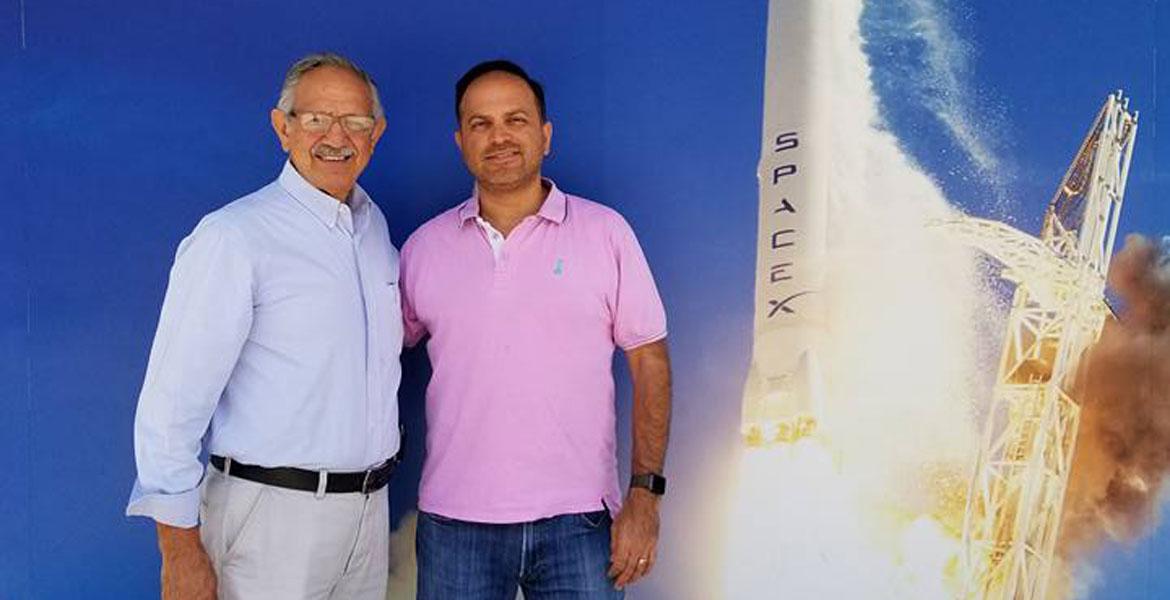 Ricardo Valerdi, right, poses for a picture with his dad, Jorge Valerdi, at the launch of one of the SpaceX rockets Ricardo helped build. Valerdi senior earned his PhD in the 1970s while working as an electrical engineer at NASA Johnson Space Center.
Home / Stories / From UA Engineering to SpaceX to West Point and Back: A Q&A With Ricardo Valerdi

From UA Engineering to SpaceX to West Point and Back: A Q&A With Ricardo Valerdi

By
Emily Dieckman
Time to read
3 minutes
Print
a- a+
Read so far
Systems engineering professor talks rocket science, cybersecurity and the importance of teamwork.

Ricardo Valerdi, professor in the Department of Systems and Industrial Engineering, director of the Eller College of Management’s Sports Management Program, and Pac-12 faculty athletics representative, just returned from a yearlong sabbatical.

In fall 2017, he was a production consultant at SpaceX, working on the Falcon 9 Block 5 rocket. The Falcon 9 was the world’s first reusable rocket, and SpaceX founder Elon Musk has described the Block 5 version as “the most reliable rocket ever built.”

In spring 2017, Valerdi taught courses and conducted cybersecurity research at the United States Military Academy in West Point, New York, where he had the opportunity to work with several former students.

How did you come across these opportunities?

One important takeaway in both cases was that they were obtained through relationships formed in college. A former classmate from my graduate school, USC, hired me at SpaceX, and three of my former UA graduate students -- now Army officers -- were teaching at West Point.

What kind of work were you doing at SpaceX?

We were building the most sophisticated rockets ever designed. One of my responsibilities was working in their production department and helping them get the rocket out the door faster so that they could launch more frequently and at a lower cost than ever before. The goal was faster, better, cheaper.

I went to the launch of one of the rockets that I worked on, and it was a fantastic experience because I saw my contribution. I was one of many thousands of people involved, but it is gratifying to see the results within a short period of time. You’re working long hours, but you’re part of a high-performing team breaking new ground in terms of performance, quality and cost.

Were you concerned when you first started because you were stepping out of your comfort zone?

Sabbaticals provide an opportunity to step out of our academic bubble and do challenging things. I certainly went in to SpaceX with some hesitation, thinking, “Oh, wow. I’m not a rocket scientist.” But I do know something about systems engineering and product development and how teams work together to create value -- it’s what I teach. Because different engineering disciplines can contribute to building a system like a rocket, I think it’s important for students to keep in mind that just because you decided that you’re going to major in a certain type of engineering doesn’t mean you’ve closed any doors for your career. It is still possible to get a job in the aerospace, mining or automotive industries -- my former students work in all of those. Whichever major you choose, you’re going to learn a lot of fundamental principles that are broadly applicable to many industries.

What did you learn from your experience?

At SpaceX, I learned a lot about their business model and how they are working to change humanity. Their mission is to make humans an interplanetary species. How crazy is that? That’s a little bit different than my typical day as an engineering professor. It certainly exceeded my expectations, because I got to see how the soup is made -- how the rocket is built.

How will you use what you learned at SpaceX?

If people at the UA, no matter what department they’re in -- mining or aerospace or mechanical or electrical or civil -- are interested in the space industry, I can forward their resumes to SpaceX as somebody who knows the company and understands the kind of people they need.

What kind of work were you doing at West Point?

I was doing cybersecurity research in the operations research center, which is led by a former PhD student of mine, Lt. Col. Matt Dabkowski. I had the opportunity to work with him again and taught a class in decision analysis in the systems department.

Was it strange working underneath someone who used to be your student?

No, it was great! And it’s an important lesson: Maintain your relationships, because you might end up working for people who used to work for you. It’s actually a great experience, because it makes you really proud to see former students flourish in their own environment. There were two other Army officers at West Point who were my students: Maj. Tommy Ryan and Maj. Danny Thebeau. So we have a strong Wildcat community at West Point. It’s becoming a tradition -- interim Provost and former College of Engineering Dean Jeff Goldberg also did his sabbatical at West Point in the same department.

What advice do you have for students who might want to work at places like SpaceX or West Point?

I think it’s important to be good at working in teams. Most technological advancements in the 21st century happen with strong teams and strong vision. That’s why Elon Musk goes out and tries to find the smartest, most driven people. That’s how his vision to make humans an interplanetary species becomes a reality.

Working in teams involves being able to adapt and identify what your role is and being willing to learn -- these things are just as important as the technical knowledge that you get in your engineering classes.

For example, the Solar Oven Throw Down is the first opportunity for our engineering students to work in teams during their freshman year, and there are more opportunities all the way through the senior design project. One of the lessons that students should take from these team-based experiences is that each individual needs to find their role on the team as quickly as possible so that they can become an immediate contributor.