By
Jill Goetz
Time to read
2 minutes
Print
a- a+
Read so far
UA doctoral candidate Lt. Col. Matthew Dabkowski has received a 2016 Omar N. Bradley Officer Research Fellowship in Mathematics, and will join the faculty of the U.S. Military Academy at West Point.

Matthew F. Dabkowski, a lieutenant colonel in the U.S. Army who is completing his PhD in systems and industrial engineering at the University of Arizona, has received a 2016 Omar N. Bradley Officer Research Fellowship in Mathematics. 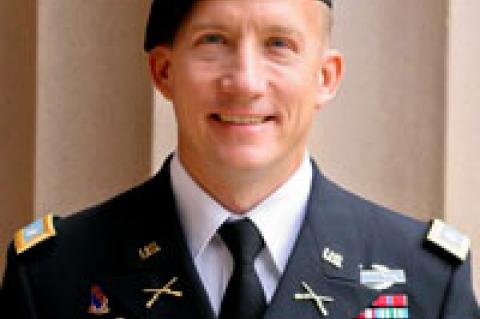 The three-year fellowship recognizes Army officers who are actively engaged in the study of mathematics, have the best-developed plans for conducting significant work and have demonstrated analytic research ability.

Dabkowski received the award to conduct research in applying optimization to network science, or social network analysis, which is not to be confused with online social networking. He began studying network science for his minor in sociology and has integrated it into his doctoral research on the cost estimation and growth of major defense acquisition programs.

As an operations research and systems analyst for the Army, Dabkowski uses the tools of mathematics -- statistics, optimization, simulation, mathematical modeling -- to streamline military procedures, increase efficiency and minimize risk. He has applied these tools to help the military address practical issues, such as how to reduce the number of soldiers on duty while maintaining a certain level of capability.

After graduating in spring 2016, Dabkowski will serve as an academy professor in the U.S. Military Academy's department of systems engineering, where he will direct the Operations Research Center of Excellence. For Dabkowski, who earned his bachelor's degree in operations research from West Point in 1997, relocating there with his wife and five children will be a homecoming.

"I loved the academic discipline of operations research and systems engineering at West Point, and I knew I would someday like to go back there," he said.

Dabkowski's other research awards have included the Military Operations Research Society's Wayne P. Hughes Junior Analyst Award in 2013 and David Rist Prize in 2012 and the Best Student Paper Award at the 2013 Conference on Systems Engineering Research.

Dabkowski spent eight years in the infantry, serving as a company commander in Iraq in 2004. Following his return stateside, he earned his UA master's in systems engineering in 2007 and applied the skills he acquired at the UA as a data analyst in Afghanistan in 2012. Continuing for his PhD, he recently took a leave of absence to assist the commanding general of the Combined Joint Task Force-Horn of Africa in Djibouti.

"I am grateful to the UA, which was very supportive of my deployment in Africa and made it easier for my family to remain near Tucson and my in-laws," he said.

Systems engineering is a good fit for him, he said.