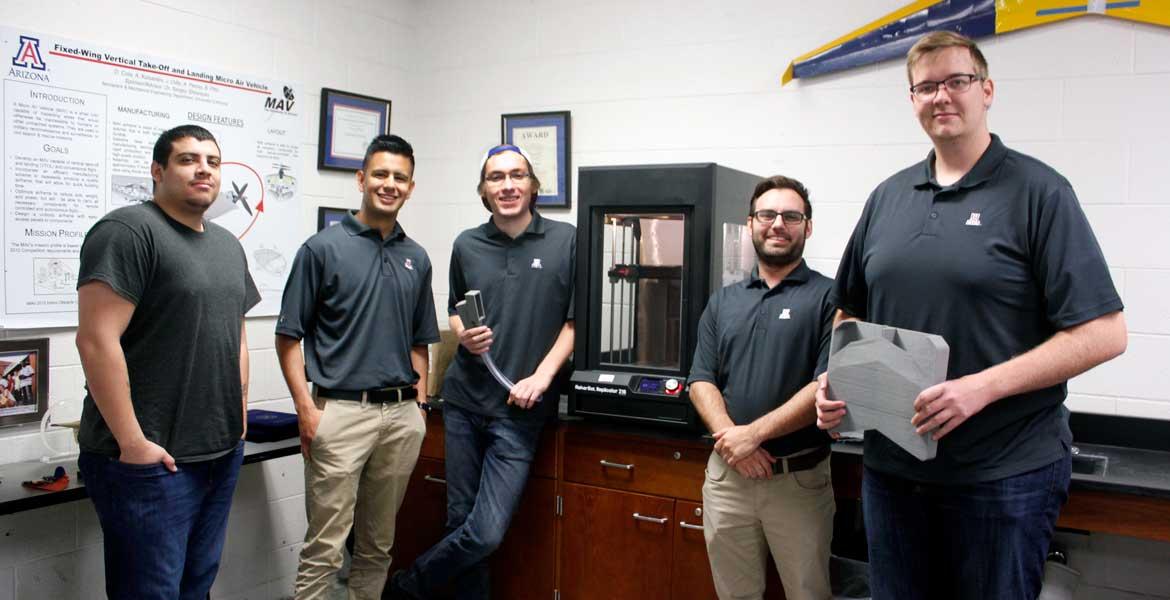 Aerospace engineering majors Johnny Aros, Melvin Garcia, JT Nicol, Matt Avelar and Wesley Bohult in the lab where they're designing and building a model of a firefighting UAV.

By
Emily Dieckman
Time to read
4 minutes
Print
a- a+
Read so far
On April 29, 616 senior engineering students will display projects they’ve developed over the course of a year. There are inventions to fight fires, reduce cyclist fatalities and combat child abuse, as well as more than 100 other projects to make our world better and bigger.

From the microscopic level, a way to strengthen stem cells as they develop into cartilage, to a level beyond our atmosphere, a CubeSat selected by NASA to fly aboard a future mission, the student inventions at the College of Engineering’s 17th annual Engineering Design Day are pushing the boundaries of what’s possible.

Don’t miss your chance to see them at the Student Union Memorial Center Grand Ballroom and the UA Mall, open to the public from 11 a.m. to 4 p.m. on Monday, April 29.

“Design Day is an exciting opportunity for the public to see what students in the College of Engineering are working on,” said interim Dean Larry Head. “It’s the best day of the year, because we get to watch student teams present the results of two semesters’ worth of design, development, testing and delivering on projects that have real impact on people’s lives.”

Wildfires can have huge costs, economically and in terms of human life. California’s 2018 season saw the burning of hundreds of thousands of acres and dozens of deaths. A team of aerospace engineering students were tasked with creating a design for a full, 90-foot-wide uncrewed airplane that can drop 5,000 gallons of fire retardant on a fire, and then fly back to a home base to refill the retardant three more times before refueling.

“I’m from Flagstaff, where forest fires were super common,” said aerospace engineering major JT Nicol. “I’ve had to evacuate my house before because of fires, so I especially wanted to be involved with this project.”

Autonomous aircraft of this size aren’t legally allowed to fly yet, so the team is designing the aircraft and 3D-printing a 5% scale model that will be about 3.5 feet long. The team’s sponsor, the New Nose Company Inc., is looking to the future for what might become an entirely new way to combat forest fires.

Goggy Davidowitz, associate professor in the UA Department of Entomology, believes in a future where bugs are a major source of protein and cattle ranchers raise grasshoppers instead of beef. And to eat grasshoppers, you have to catch them first. Because grasshoppers are pests that eat crops, farmers also need a way to remove them from their fields. A method for safely capturing them not only would allow Davidowitz to further his research into insect protein, but also it would provide a solution for organic farmers who don’t want to use bug-killing pesticides.

Davidowitz asked a team of UA Engineering seniors to create an autonomous grasshopper harvesting device to collect grasshoppers without harming them.

The students are basing their design on “hopper dozers,” horse-drawn collection bins farmers used to capture grasshoppers in the 19th century. When they get startled, grasshoppers jump in whatever direction they happen to be facing, so by building a structure that’s several feet wide, the team believes they can capture most of the grasshoppers in the vehicle’s path. The autonomous nature of the vehicle means it can sense when it’s full, or when its battery is running low, and return to a home base.

“We learned a lot about artificial intelligence and finding the quickest path to a solution,” said team lead and electrical and computer engineering major Cooper Wynn. “The biggest thing in technology right now is autonomous vehicles, and this gave us a chance to work with one, and kind of design our own.”

According to the Arizona Department of Transportation, 1,371 pedal cyclists were injured and 32 killed in collisions with motor vehicles in 2017. Electrical and computer engineering major Eric Cornforth says he’s had more than one close call with vehicles while riding his own bicycle.

Cornforth and the rest of his team, sponsored by Lockheed Martin, developed a device that uses a deep learning system and camera attached to the back of a bicycle to prevent collisions between cyclists and vehicles.

“It’s kind of like a rearview mirror for cyclists but with a little more intelligence,” said electrical and computer engineering major and team lead Ruben Purdy.

The team exposed the device to open source footage of vehicles, commonly used in research for self-driving cars, so their system could “learn” what a car looks like and how to identify one. Goals for this first version of the project are to get the software up and running and ensure the camera operates despite the jitter of a moving bike.

Measuring the Age of Bruises

A 2-year-old child shows up to day care with a bruise on her arm. Her dad dropped her off today, she was at her mom’s house the day before and she was staying with her grandparents the day before that. All the guardians are pointing fingers at one another. How can a social worker or physician determine what happened?

This year’s only all-woman senior design team is creating a device that measures the age of bruises. Since bruises change color over time, from blue to purple to green to yellow, the team is designing a specialized camera to determine the age of a bruise by measuring the way it reflects light.

“Most people know that when they have a bruise, they think it’s ugly,” said Urs Utzinger, the team’s sponsor and an associate department head for biomedical engineering. “Then it gets uglier.”

Social workers and physicians can apply the portable device gently to bruises to take measurements of them, and save the information about the bruise to the device’s memory card. In a future, more advanced version of the device, the card will be inserted into a computer for data analysis.

“This project could potentially help people,” said team lead and biomedical engineering major Samantha Davidson. “I felt like this was going to have an impact.”

Other Design Day projects include: