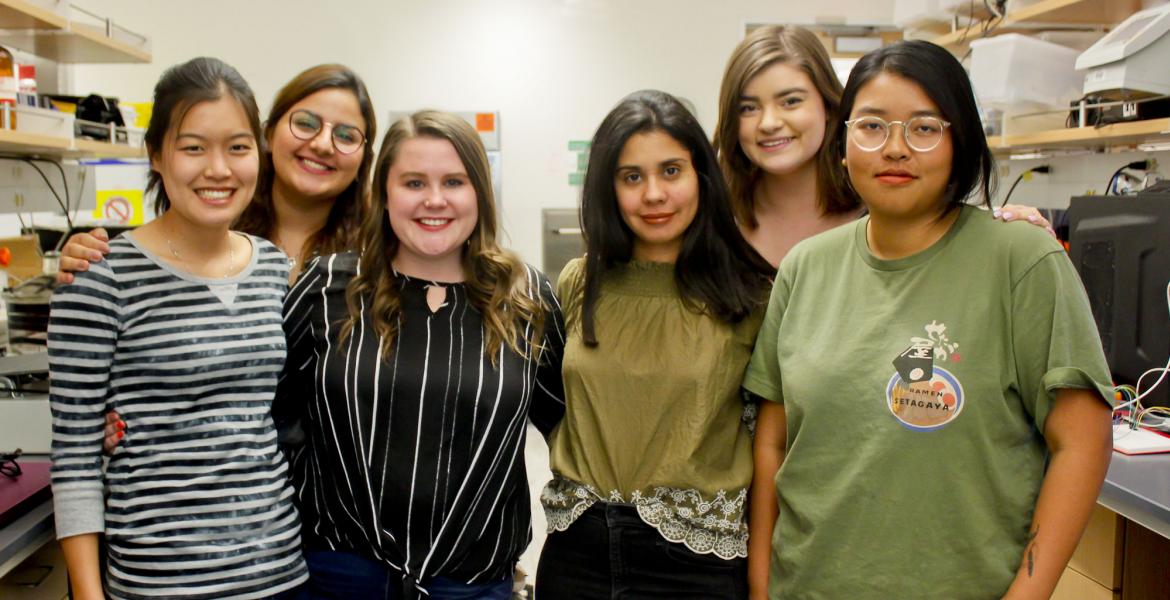 The bruise age measurement team in the lab, from left: Alexa Shumaker, Ghazal Moghaddami, Alexandra Janowski, Claudia Oroz, Samantha Davidson and Nattakanan "Gigi" Rotwiang, who is majoring in mechanical engineering; the others are biomedical engineering seniors.

By
Emily Dieckman
Time to read
2 minutes
Print
a- a+
Read so far
All-woman team of senior engineering students creates bruise age measurement device for use in child abuse and domestic violence cases.

A 2-year-old child shows up to daycare with a bruise on her arm. Her dad dropped her off today, she was at her mom’s house the day before and she was staying with her grandparents the day before that. All the guardians are pointing fingers at one another. Who’s to blame?

“The forensic ability to accurately determine the age of a bruise has long evaded the medical community, which hasn’t been able to answer questions about how old bruises are with any degree of accuracy,” said Dr. Dale Woolridge, director of the Southern Arizona Children’s Advocacy Center and professor of emergency medicine, pediatrics, and chemistry and biochemistry at the University of Arizona.

In 2018, Dr. Woolridge approached Urs Utzinger, associate department head for biomedical engineering undergraduate affairs, about creating a device that could determine the age of a bruise by measuring the way it reflects light. The two decided to sponsor a project in the Engineering Design Program and ask a team of seniors to take the first step toward developing it. Teams of four to six seniors in the program spend a year designing industry- and university-sponsored technologies with real-world applications. This team of five biomedical engineers and one mechanical engineer is 2019’s only all-woman engineering design team.

In 2017, 72% of all child fatalities in the United States caused by physical abuse occurred in children younger than 3 years old, according to the U.S. Department of Health & Human Services. Since Dr. Woolridge works with these cases regularly, the idea stemmed from a desire to help children. However, this device could also be used in worker’s compensation cases, domestic violence situations or other circumstances where a person can’t answer questions about who or what caused their bruises.

Anyone who’s ever had a bruise knows the color changes over time, moving through blue, purple, green and yellow tones before fading. As Utzinger said, “Most people know that when they have a bruise, they think it’s ugly. Then, it gets uglier.”

“We’re using a specialized camera and, through our software, enhancing the image information in order to better evaluate the color of the bruise,” said team member Ghazal Moghaddami.

The final version of the device will measure just a few inches across and hold a spectrometer, two microprocessors, a display screen and a memory card to store the data of multiple patients. Social workers and physicians can take measurements by gently applying the portable device to the affected skin.

“They’ll take one base measurement to compare the bruise to the person’s regular skin,” said team lead Samantha Davidson. “Then they’re going to take measurements on the bruise itself. The idea is that we’ll be able to remove the memory card and put it in a computer to analyze the data.”

Everyone Needs an Engineer

The team members have a broad range of interests: Davidson is going on to pursue a master’s in epidemiology at the UA. Alexandra Janowski is also pursuing a UA master’s, in biomedical engineering. Others have plans to become physicians’ assistants, enter medical school or work in the biotech industry. But they all were drawn to the opportunity to create this device

“This project could potentially help people,” Davidson said. “I felt like this was going to have an impact.”

They also agree that their experience in the Engineering Design Program helped them learn everything from programming to interpersonal skills, which will help them in any career path they choose.

“Even if you don’t go into engineering, if you go into health, you have a different insight into how things actually work,” said team member Claudia Oroz. “Even if I never work as an engineer, I will know exactly what’s going on and why it’s going on.”

See this project, and 117 others, at the University of Arizona’s Engineering Design Day on Monday, April 29.

Dale Woolridge is also the block director for the College of Medicine - Tucson curriculum in digestion, metabolism and hormones; and director of the Banner Suspected Child Abuse and Neglect program for the western region.

Urs Utzinger is also an associate professor of biomedical engineering, obstetrics and gynecology, electrical and computer engineering, and optical sciences, and a member of the BIO5 Institute.