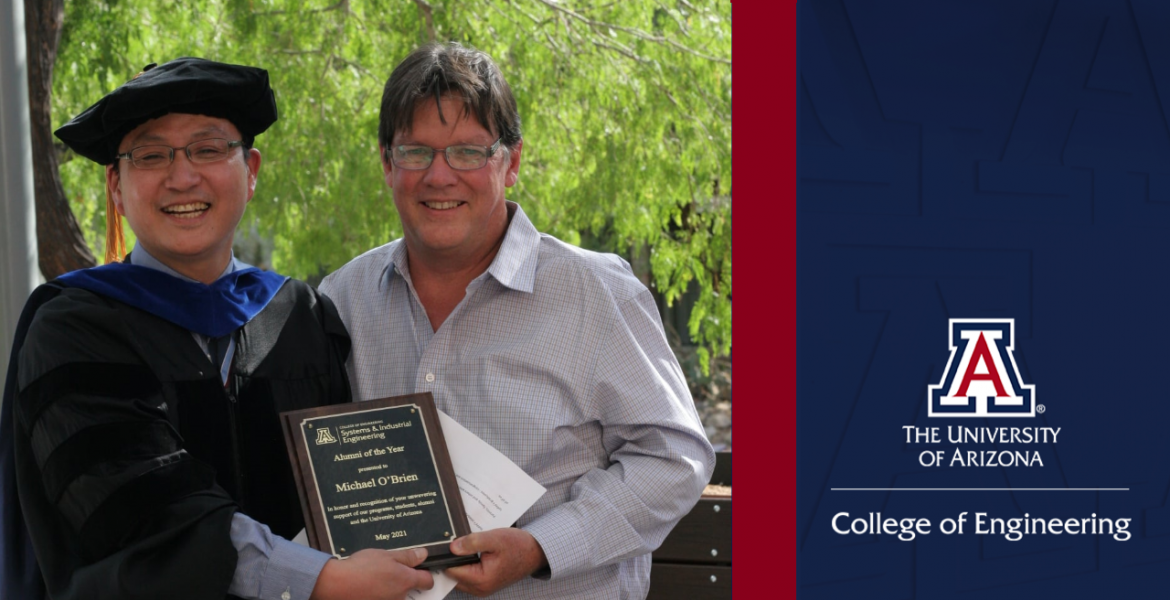 SIE Alum of the Year Focuses on Mentorship and Leadership

By
Emily Dieckman
Time to read
2 minutes
Print
a- a+
Read so far
Mike O’Brien earned both his bachelor’s and master’s degrees in the Department of Systems and Industrial Engineering, and he has gone on to serve as an adjunct professor in SIE and a range of industry positions.

Today, Mike O’Brien, the 2021 University of Arizona Department of Systems and Industrial Engineering Alum of the Year, is the chief operating officer of the real estate development company Kiernan-West. In the 1980s, he was a student at the University of Arizona switching between majors as he decided what he wanted to do.

“I had a lot of appreciation for math, and I knew I wanted something that kept an intersection of analytics and human interactions,” he said. “One of my classmates described what a systems engineer does, and I soon realized my calling.”

He has fond memories of his self-described “nerdiness” blossoming in the SIE department, where he and his peers spent countless hours solving homework problems on a blackboard over pizza. Honing his technical software and engineering skills had a large bearing on his future success, according to O’Brien. One of his earliest classes in systems engineering gave him a framework to clearly define a problem, something he says has been invaluable.

Outside of the department, O’Brien was involved in Camp Wildcat, a club dedicated to providing camping and outdoor experiences to underprivileged children, including those with disabilities, in the Tucson area. He and his fellow club members planned camping and hiking trips, raised funds, rented cabins or campsites, cooked meals and planned activities for the kids. He and his wife Andrea, who was also a “Camp Wildcatter,” continue to support the disability community.

“Aside from the obvious organizational, management and leadership practice opportunities, those experiences helped me by exposing me to a more diverse population,” he said. “I’ve always attributed the Camp Wildcat experiences to be the springboard in understanding the value of diversity in life, and particularly in the workplace.”

After earning his bachelor’s degree in systems engineering in 1991, O’Brien spent two years in industry before returning to the UA for his master’s degree in industrial engineering. After completing his MS in 1996, he went on to work for companies such as Intel and Verizon doing supply chain data analytics. He said the toolbox he started building as an SIE student, with methods for defining problem boundaries, identifying clear cause and effects, and grading potential solutions, has helped him differentiate himself in his career.

In 2015, he fulfilled a longtime goal by returning to SIE as a lecturer. He spent two years as an adjunct professor before he returned to the private sector, joining Kiernan-West in 2019. He’s still an active member of the department community, attending panel discussions, offering guest lectures, and serving on the SIE Partner Board.

“I absolutely loved those two years and fully intend to return at some point, if the opportunity arises,” he said. “One of the things I’ve always enjoyed throughout my career is mentoring, or just imparting what I do well onto those who are eager to learn.”

Some of his top advice for students? Look at ways to bring together the social and academic parts of your life.

“The more opportunities you create to apply your coursework to real-life problems, the more passionate you will be, and the better you will grasp the concepts,” he said. “The problems you solve in your professional life will not be the same ones you solve during your school years. So, understand that the goal is not just to learn how to solve a specific problem, but how to problem solve in general.”

O’Brien is the sixth recipient of this departmental award. He accepted it at the SIE pre-commencement ceremony in May 2021. Past recipients are Herb Burton, Cindy Klingberg, Ted Landis, Marla Peterson and Ann Wilkey.

“Mike is truly an outstanding alum, and I am so proud to have him as part of the SIE community,” said SIE Department head Young-Jun Son. “He was one of the students’ favorite instructors, and his impact on our students was highly significant. Mike has been serving on our SIE Partner Board for a long time, and his unique and caring insights into the SIE profession have contributed to the success of the University of Arizona, the College of Engineering and the SIE department.”