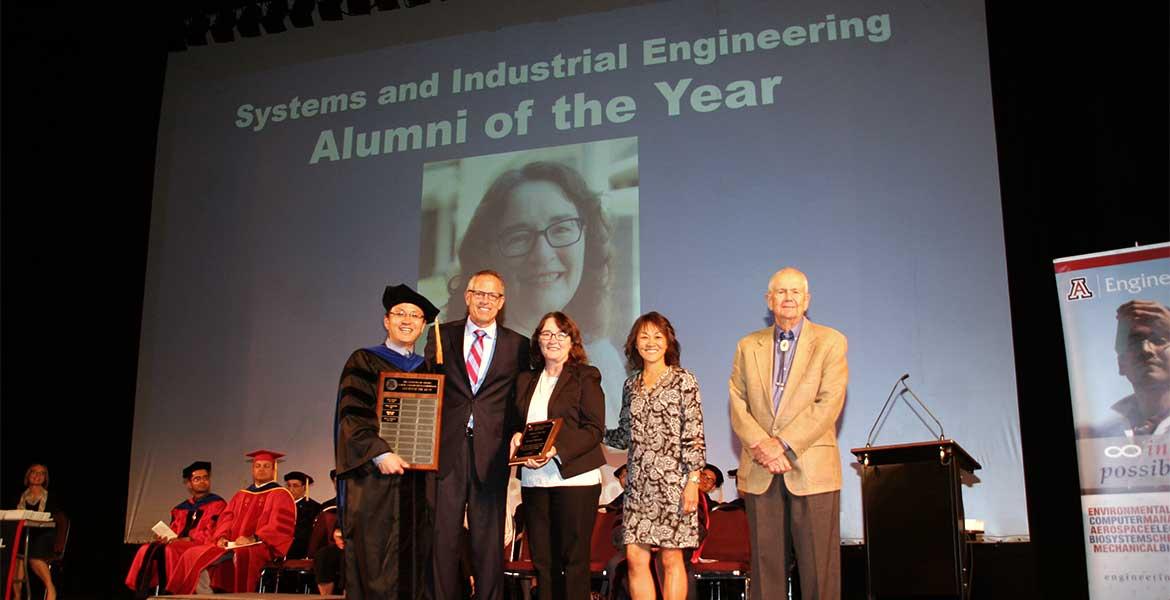 When Marla Peterson from the University of Arizona's Class of 1983 went to get traveler's checks for her first business trip, the clerk insisted the young engineer was just an assistant and told her that the person actually traveling would have to pick up the checks.

“That was the first time it was basically stated to my face: Someone was telling me that I wasn’t an engineer because I’m a woman,” she said. “It really made me think, ‘OK, I’ve got to do something about this.’”

Peterson has indeed dedicated herself to change, and to supporting future engineers, particularly at her alma mater. The UA Department of Systems and Industrial Engineering recognized Peterson with its annual Alumni of the Year Award at the department’s pre-commencement ceremony May 9.

“I am deeply humbled, surprised and honored by this award, because I know a lot of SIE alumni who have done a lot to support the university, as well as done really amazing things in their careers,” said Peterson, who also received the 2006 UA Bear Down Award.

“Marla’s contributions have been exceptional,” said department Head Young-Jun Son. “She’s been a mentor and role model for our students, supported student chapters and projects, and served on the SIE industry partner board over two decades.”

Agent for Change and Champion for Diversity

Peterson started her career 37 years ago with Garrett Turbine Engine Co., now Honeywell, and thought she’d stay for a few years and then move on to something else. She’s been with the aerospace, engineering and technology company ever since.

“The people and the technologies are what keep you here,” she said. “It’s just amazing, the things that we do.”

These days the production support engineering manager develops processes, tools and techniques so engineers can do engineering, efficiently.

Peterson has made it a priority to recruit employees from different backgrounds, many from the UA, and she works with a diverse team of individuals who pool their perspectives to get to the root of problems and find the best solutions.

“We’ve had many cases where if we hadn’t had an inclusive team, we wouldn’t have gotten where we are today,” she said. “Inclusivity really does provide a lot of benefits other than just abstract diversity of thought. It also helps in our business with selling, and where we sell our products. How you think about different cultures and different people plays into marketing as well.”

Peterson toured all three of the state’s universities after attending high school in Ajo, Arizona. She said she chose the UA because it just “felt like home.”

From her office in Tempe, which is decked out with UA colors, Peterson makes sure Honeywell, a long-standing partner to the college, stays mindful of the talent coming out of her alma mater.

My blood is red and blue, so I really enjoy being on campus and just meeting other Wildcats.”

She represents Honeywell on the Society of Women Engineers Corporate Partnership Council, was the 2016 SWE Advocate for Women in Engineering, and serves as the UA chapter liaison for the organization.

“The University of Arizona definitely provided me a career I wouldn’t have had if I hadn’t found the SIE department,” said Peterson. “My blood is red and blue, so I really enjoy being on campus and just meeting other Wildcats.”

Honeywell hires many UA engineering graduates, and the company has also sponsored record-breaking numbers of senior projects for the Engineering Design Program, a proving ground for students.

“Marla actively recruits our students at career fairs and through on-campus interviews and internships,” said Larry Head, interim dean of the College of Engineering and SIE professor, who nominated Peterson for the award. “She is a truly outstanding alumna.”