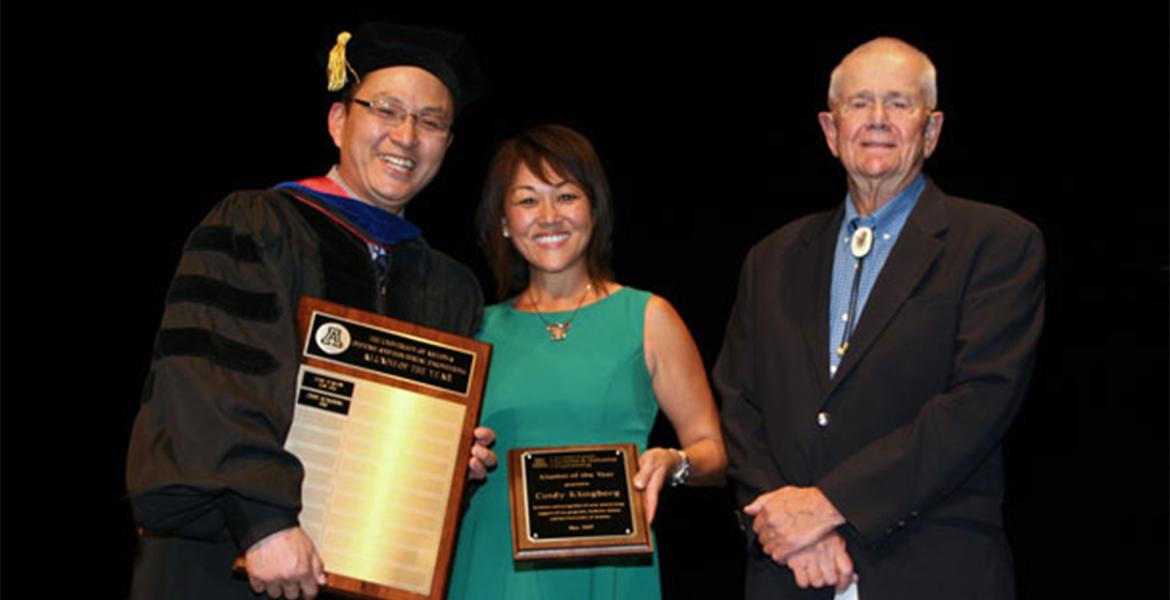 By
Jill Goetz
Time to read
2 minutes
Print
a- a+
Read so far
Raytheon engineer receives Alumni of the Year Award for 20 years of dedication to UA College of Engineering students and programs.

In her remarks to graduating University of Arizona systems and industrial engineering students in spring 2017, Cindy Klingberg said she was forever indebted to her parents for their encouragement and support. The UA Department of Systems and Industrial Engineering -- and College of Engineering -- could say the same of Klingberg, who received the department’s 2017 Alumni of the Year Award.

“Cindy is a proud and successful alumna of our department, College and the UA,” said department head Young-Jun Son, who presented her award at a precommencement ceremony in May. “Cindy has lifted up our students and advanced our mission tremendously. We appreciate her endless support of our programs, students and alumni.”

The Raytheon Missile Systems engineer and program manager, who earned her UA bachelor’s degree in industrial engineering in 1988, is the second alumnus to receive the honor. She was introduced by 2016 inaugural recipient Herb Burton, a 1960 graduate in engineering mathematics and retired executive at AT&T Bell Laboratories.

“As grateful as I am for this award,” said Klingberg, “the greatest reward I’ve ever been given is the simple opportunity to help generations of students learn how to think critically about the world around them.”

Rising Through the Ranks at Raytheon

Born and raised in Phoenix, Cindy Tang began her career in 1989 as a manufacturing engineer at a semiconductor production facility for Rockwell International in Newport Beach, California. She returned to Arizona in 1991 to marry Dan Klingberg, who received his UA bachelor’s degree in electrical engineering and is a retired Raytheon engineer.

Klingberg has brought many Raytheon colleagues to campus to meet with College of Engineering students and is active in company recruiting at the UA. She has mentored several Raytheon-sponsored senior design teams.

“Through scholarships, mentoring and career guidance, Cindy has helped countless UA Engineering students succeed and secure jobs at Raytheon,” said Jeff Goldberg, dean of the College, who taught her senior design class. “She is a treasured friend who has provided invaluable counsel to me and other College leaders.”

Many of Klingberg’s efforts are directed at increasing diversity in the engineering profession. She is a member of Raytheon’s Asian Pacific Association and its Women’s Network and has served on the boards of the UA President’s Diversity Advisory Council and the UA Asian American Faculty, Staff and Alumni Association. Her honors have included Raytheon’s Woman on the Move Award and the Tucson Pan Asian Community Alliance Woman of the Year Award.

Cindy and Dan Klingberg are generous supporters of the College of Engineering. They are members of its annual giving society, the da Vinci Circle, and serve on the da Vinci Advisory Council. In 2012 they received the Alumni Bear Down Award for their contributions, which include helping establish endowments and serving on alumni boards.

The couple, whose two children are studying science and engineering, recently celebrated their 26th wedding anniversary.