By
Jill Goetz
Time to read
3 minutes
Print
a- a+
Read so far
University of Arizona materials science and engineering associate professor Erica Corral and Honeywell engineer and alumna Marla Peterson are helping more women and Hispanics excel in STEM.

Two women Wildcat engineers have been honored -- one statewide, in Phoenix; the other nationwide, in Philadelphia -- for their professional achievements and contributions to diversity in science, technology, engineering and math, or STEM. 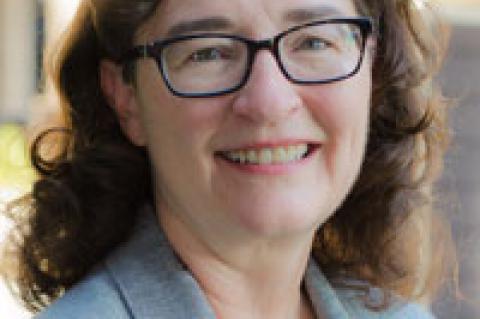 The Phoenix-based Victoria Foundation works to increase educational and faculty opportunities for Latinos and Latinas. Several College of Engineering alumni and friends joined Dean Jeff Goldberg at the event to celebrate Corral’s award, named for Eugene Garcia, professor emeritus and former dean of the College of Education at Arizona State University.

“It is an honor to be recognized by the Victoria Foundation for my faculty research and my work in training students for careers in STEM,” Corral said.

Corral is one of very few scientists worldwide working on the next generation of thermal protection systems for extreme conditions in air and space flight. Her research team is developing high-temperature nanocomposite ceramic materials using a special furnace in her lab that can reach 2,000 degrees Celsius. These advanced materials can withstand such high temperatures without losing their shape or integrity, while also featuring novel electrical and thermal properties for fuel efficiency and solar energy production. Potential applications include jet engines for longer-, faster- and cleaner-flying airplanes and more protective and durable coatings for the space shuttle.

Corral, a 2016 University of Arizona Distinguished Scholar, has a bachelor’s degree in metallurgical and materials science engineering from the University of Texas at El Paso and a doctorate in materials science from Rice University. Since joining the UA in 2008, she has won a National Science Foundation Career Award and a Young Investigator Award from the Air Force Office of Scientific Research.

She has been widely recognized for her efforts to promote an inclusive STEM environment and for serving as a role model for Hispanic girls and women.

She was selected Most Promising Doctoral Engineer or Scientist at the 2010 Hispanic Engineer National Achievement Awards Conference. In 2011 she won the Bradley Stoughton Award for Young Teachers from the materials science research organization ASM International, for her dedication to training and mentoring young people in materials science and engineering.

Every summer, Corral presents the popular "Materials Magic Shows" in her UA lab to get local youth excited about science and engineering.

Marla Peterson, who has held increasingly responsible positions as an engineer at Honeywell Aerospace since earning her bachelor’s degree in systems engineering from the UA in 1983, has received a 2016 Advocating Women in Engineering Award from the Society of Women Engineers, or SWE. She will formally accept the award at WE16, the world’s largest conference for women engineers, on October 28 in Philadelphia.

The award recognizes women from industry and academia who have demonstrated professional excellence in their chosen STEM fields and advocated for women in engineering. She is one of five recipients of this year’s award.

She has long been active with the Society of Women Engineers, or SWE, the world’s largest advocacy organization for women in science and technology with over 30,000 members.

Peterson frequently visits the UA campus to recruit, mentor, support and inspire students in the College of Engineering and the UA chapter of SWE. She serves on the UA Systems and Industrial Engineering Advisory Board and previously served as scholarship chair for the UA Phoenix Alumni Board and president of the UA Engineering Alumni Council.

As Honeywell’s campus manager, she has played a key role in recruiting students and graduates for full-time employment, internships and other professional development opportunities at Honeywell. In 2006, the UA Alumni Association and the College of Engineering presented Peterson with the Bear Down Award.

“Thanks in large part to the dedication of faculty and alumni like Erica Corral and Marla Peterson, the University of Arizona ranks highly on gender and ethnic diversity in many categories,” said College of Engineering Dean Jeff Goldberg.

Some 25 percent of all first-year College of Engineering students are women, and 43 percent of all first-year University students are members of ethnic minorities. In its latest annual ranking of the nation’s top 100 colleges and universities, “Diverse: Issues in Higher Education” lists the UA in the top 50 for granting bachelors, master’s and doctoral degrees to Hispanics in engineering and related fields.

The College of Engineering is working to further increase diversity and has produced a video (below) featuring women undergraduates. This summer the University of Arizona hired two new administrators to promote diversity and inclusion among students and faculty on campus.