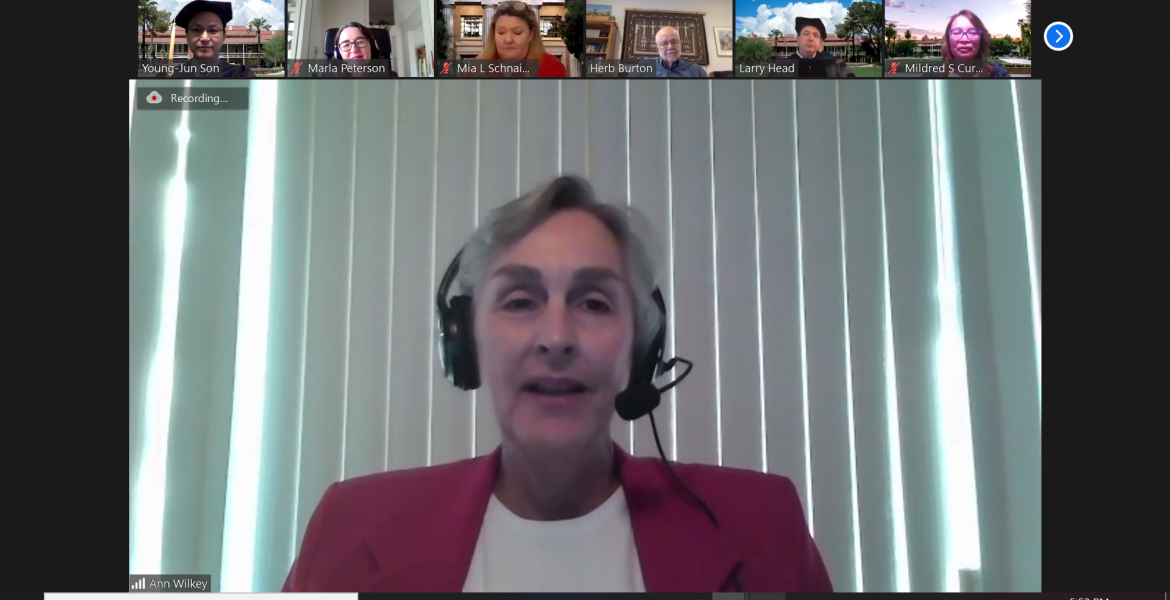 Ann Wilkey accepting her award at the Department of System and Industrial Engineering's virtual convocation ceremony.

By
Emily Dieckman
Time to read
2 minutes
Print
a- a+
Read so far
Double SIE graduate recognized for stellar career, service to the university and dedicated support of engineering students.

Today, Ann Wilkey is a systems engineer with more than 25 years of experience in creating engineering designs and applications, while managing projects worth nearly a billion dollars. She’s also the Department of Systems and Industrial Engineering’s 2020 Alumna of the Year.

But 40 years ago, she was a Yuma, AZ native preparing to follow in her four siblings’ footsteps by attending the University of Arizona. While she applied to several schools during her senior year of high school, she always knew she’d choose to be a Wildcat. When it came time to pick a major, Wilkey, who’d always enjoyed math, looked through her options and counted up which majors required the most math units. Systems engineering and engineering mathematics were tied for first place.

“So, I read the three-sentence description of these two majors and selected systems engineering,” she said. “And to think, some people don’t believe in luck or divine providence.”

Wilkey thrived in the SIE program, taking classes in statics, dynamics, thermodynamics, electrical engineering, and applied mathematics. She also received the Wilson Foundation Scholarship, which was critical in helping her continue her studies, and which she would never forget.

“With 100% conviction and certainty, my education at the University of Arizona prepared me for my career,” she said. “I have always felt indebted to the outstanding professors and influencers I met there -- people like Dr. Schultz, Dr. Wymore, Dr. Dudley, Dr. Call and Dr. Lomen.”

After graduation, she took a summer job at General Dynamics, planning to return for graduate school in the fall. But work was going so well that she decided to stay on board.

“Every Monday morning at work, the phone would ring, and it was the legendary SIE professor, Dr. Don Schultz. After I would answer the phone in a very business-like manner, he would say, ‘When are you coming back?’ After a year or so, I returned to Tucson for graduate school. Thank goodness for Dr. Schultz!”

Wilkey’s master’s degree, which specialized in robotics and automation, left her even better equipped for a career in engineering. She went on to work for companies including Sandia National Laboratories, Lockheed Martin and Asyst Technologies, excelling in both engineering and management positions. She’s worked with 300mm semiconductor wafers and with larger-than-life, 30-meter robots. She’s volunteered as an instructor in elementary and middle schools, and she’s managed teams of over 100 people. In addition, she’s played an instrumental role in starting three businesses and patents.

“’Adventure’ is probably the best way I would describe my career,” she said. “I worked underground in Nevada, I worked on the F117A Stealth Fighter, and I worked on the USS Midway. I have collected stories to last a lifetime.”

Giving Back to Alma Mater

In addition to her positions as a researcher and director at the University of Arizona, Wilkey has served on the College of Engineering’s advisory board and contributed to the da Vinci Circle. She has also been a member of the SIE Industry Advisory Council and the university’s alumni council.

When she received her first scholarship in 1980, Wilkey vowed to pay it forward by providing a future student with a scholarship. She’s gone above and beyond in keeping her word, donating to the department as soon as she graduated, beginning to provide scholarships for engineering students in 2004 and establishing an endowment in honor of her mother in 2009.

“I started fulfilling that promise with my first donation in 1985 and intend to continue my support throughout my life,” she said. “Wherever I’ve gone in my career, I’ve always taken the University of Arizona SIE experience with me.”

Wilkey accepted her award at the 2020 SIE convocation, held virtually due to the COVID-19 pandemic. The award was first established in 2016 and given to Herb Burton. The other recipients are Cindy Klingberg (2017), Ted Landis (2018) and Marla Peterson (2019).

“Ann serves as an inspiration for the SIE students of today and tomorrow,” said SIE Department Head Young-Jun Son. “Not only has she been incredibly generous in her support of the college and the department, but she is also leading a successful and versatile career that exemplifies what a person can do with an SIE degree.”