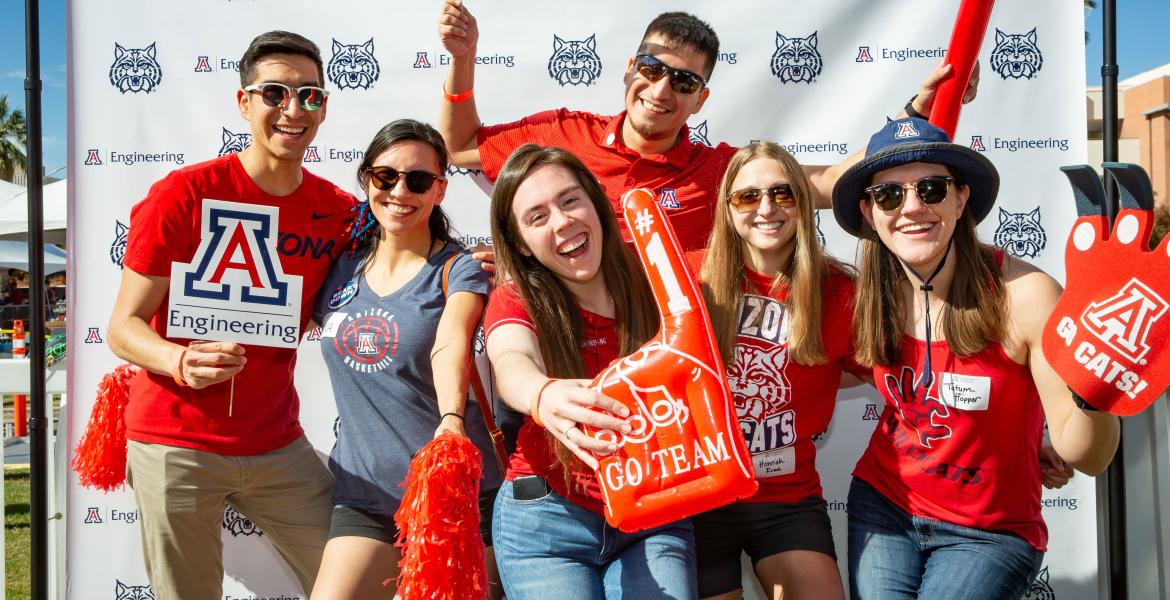 Home / Stories / Homecoming 2019: Bear Down and Forge Ahead

Homecoming 2019: Bear Down and Forge Ahead

University of Arizona College of Engineering faculty members, staff, students, friends and graduates -- ranging from the Class of 1951 to the Class of 2019 -- gathered to enjoy Homecoming camaraderie at the 56th annual Engineers Breakfast on Friday, Nov. 1.

David W. Hahn, Craig M. Berge Dean of the college, spoke about standout strengths in hypersonics and quantum computing. He also highlighted the recent announcement of the largest donation in the college’s history by the Berge family. Made in honor of a mechanical engineering alumnus and beloved husband, father and grandfather, the gift has endowed a dean’s chair and named a new undergraduate program.

I was drawn here by the Wildcat spirit, and by the bright future of this college."

“The Craig M. Berge Engineering Design Program allows us to really take the College of Engineering to the next level,” Hahn said. “This will enable us to systematically integrate design through all four years of our curriculum and bridge the gap between the ENGR 102 introductory course and the interdisciplinary capstone course to fuse design with innovative business skills and economic development for our students.”

Alli Gilbreath, electrical and computer engineering senior and president of the Engineering Student Council, offered the student perspective when she spoke about how she fell in love with engineering after changing her plans to study biochemistry.

“My classes teach me skills that I can apply in the real world, my colleagues are ambitious, and University of Arizona faculty and alumni are developing new technologies every day,” she said. “The out-of-this-world projects I’ll be working on after graduation are what really drive me forward.”

Did You Say Jojoba?

Andy Harris, 1987 chemical engineering graduate, CEO of Vantage Specialty Chemicals and recipient of the 2019 UArizona Alumni Achievement Award, gave the breakfast’s keynote address. He focused on the jojoba bean, a seed native to Arizona and used by Native Americans for hundreds of years. Today, it provides a sustainable alternative to the microbeads and chemicals used in everyday products like makeup and body wash. Engineers play an important role in processing jojoba, from harvest through to refinement.

“It uses just about every area of engineering,” Harris said. “From mechanical to civil to agricultural to environmental to systems and process engineering, all of these different things bring a seed from the desert into a usable oil form.”

UArizona President Robert C. Robbins also took the podium to speak about the college’s importance to the future of the university -- and the world.

“This talk hit on all of the points, from the environment to agriculture to engineering to consumer products,” he said. “That is the Fourth Industrial Revolution.”

After breakfast, several of the college’s 10 departments held breakout events. The civil and architectural engineering and mechanics luncheon featured a talk by professor Tribikram Kundu on the use of ultrasonic waves for structural health monitoring.

The Department of Mining and Geological Engineering hosted its 14th annual Lacy Lecture, named in honor of the department’s founder, Willard “Bill” Lacy. Jean Savage, vice president of the Surface Mining & Technology Division of Caterpillar, discussed how autonomous technology could not only make the mining industry more efficient, but also more sustainable for the environment and safer for miners.

“We’ve proven over and over again that when you use autonomy, you can park some of the machines you were using before,” she said. “You need less equipment to do the same amount of work, meaning you may be down to a mine with just 30 people on site and most of them back in that operation center, out of harm’s way.”

After spending his day interacting with UArizona engineers of the past, present and future, Dean Hahn said his first Homecoming was fantastic.

“I was drawn here by the Wildcat spirit, and by the bright future of this college,” he said. “And I can say, every day over the past four months, I’ve never failed to be amazed by what’s going on this campus.”