By
Jill Goetz
Time to read
less than
1 minute
Print
a- a+
Read so far
From solving technical problems for the president to increasing STEM opportunities for youth, Homecoming 2015 highlights engineers’ central role in building a better world.

Attendees at the University of Arizona Engineers Breakfast got the inside story of the problem-plagued HealthCare.gov website from the Microsoft executive whom President Barack Obama tapped to fix it. 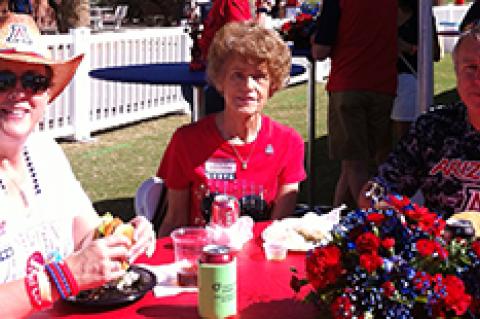 “What we do as engineers is becoming more and more essential to how we operate as a nation,” 2015 College of Engineering Alumnus of the Year Kurt DelBene told nearly 400 alumni, faculty, students and industry partners -- from Washington state to Florida -- at the Engineering Homecoming’s kickoff event on Oct. 23.

Among those present at the event, which raised funds for student scholarships, were 95 Raytheon engineers and the most senior Engineering Homecoming attendee, Robert “Bob” Hall, 92, who earned a bachelor’s degree in civil engineering in 1949.

Dean Jeff Goldberg celebrated the College’s increase in enrollment, up by more than 150 students from last year, new faculty, and a growing portfolio of entrepreneurial Engineering successes. He thanked alumni, donors and industry partners for their support.

“All of you in this room are critical to our success,” Goldberg said. 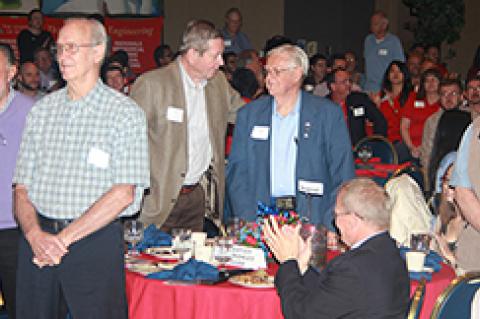 The crowd celebrates highly regarded alumni at the 2015 Engineers Breakfast.

At the Engineers Breakfast Goldberg also introduced a new College 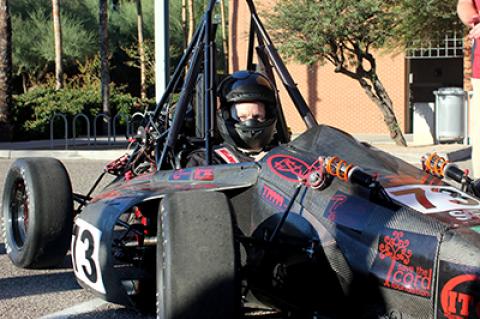 Engineering Senior Design Day is another example of UA engineers “bringing their knowledge to bear on actual problems, to create a better future,” she told the audience. “The spirit of 100-percent engagement that we are pursuing for the entire University is grounded in Engineering.”

Introducing Alumnus of the Year Kurt DelBene, who received a bachelor’s degree in industrial engineering from the College in 1982, Goldberg said, “It’s rare to have an alumnus who has worked on a project that I would dare say everyone in this room has used. How many of you have used Microsoft Office at least once?” Hundreds of hands shot up.

DelBene spoke candidly about leaving Microsoft, where he had advanced over 20 years to president of the Microsoft Office division, to take over the problem-plagued HealthCare.gov website in summer 2013 on the urging of President Barack Obama.

Created to implement the Affordable Care Act and run by the Centers for Medicare & Medicaid Services, HealthCare.gov crashed its first day of operation and had a rocky rollout for several months.

DelBene told a cautionary tale about how not to develop a website, citing the rush to meet premature deadlines and inadequate testing as two factors contributing to the crash. Perhaps the greatest flaw, he said, was having IT staff trained to run computer systems -- not design websites -- develop the new site.

He summarized his efforts to build a more effective and accountable team and a functioning website before leaving the advisory post and returning to Microsoft in spring 2015 as vice president of corporate strategy and planning.

“All across America, systems of this ilk are going to be more and more important and will need experts who can build them, not just operate them,” he said. "So the world is definitely coming the engineers’ way.”

Other honorees shared their own stories of service in the public and private sectors.

Cathleen Barton, recipient of the College’s Advocacy Award, led programs at Intel to increase diversity in STEM fields for more than 30 years before retiring. She helped build and grow the UA Engineering 102 High School program, now in 23 high schools in Arizona and California, and the College’s participation in Engineering Projects in Community Service, or EPICS.

In recognition of her work in STEM outreach, Procter & Gamble executive Bonnie Curtis, one of four women to graduate in 1980 with a UA bachelor’s degree in chemical engineering, received the College’s 2015 Professional Achievement Award. Curtis began managing plants in the United States and China for the manufacturing giant just after graduating and since 2006 has been vice president for product supply.

“My passion is lifting up girls,” said the mother of four children, who is also a popular speaker on overcoming the challenges of working motherhood.

The Young Alumni Award went to Nathan Palmer, a bridge engineer at Structural Grace, who received bachelor’s and master’s degrees in 2003 and 2005 and has advised the civil engineering and engineering mechanics department as chair of its Alumni and Industry Council.

Small groups of students met with alumni honorees during the Homecoming festivities.

“We asked her a ton of questions about our careers,” said Cali Squire who, along with four other chemical engineering students, met with Curtis. “She was very honest and up-front about the challenges she faced as a working mother trying to advance in a male-dominated industry.” Squire, president of the Engineering Student Council and an Engineering Ambassador, will work at Procter & Gamble after graduating in May 2016.

“The education the College is providing remains pragmatic, intense and masterful,” Curtis said after the meeting. “I know that each of these students will achieve their goals while making the University proud. Thanks for allowing me to be part of their lives.”

DelBene and three of his classmates met with systems and industrial engineering design seniors, and the Wildcat Formula Racing team treated the visitors to a spin in their Formula One racecar.

“We were blown away by the quality of the students,” said DelBene. “It is really great to see that the UA Engineering program is thriving.”

On Saturday morning, more than 100 Wildcat engineers gathered at the College’s tailgating tent, sponsored by Newton Don, BS chemical engineering 1968, as well as Engineering student clubs and departments. Here is what a few of the alumni visiting the tent on the UA Mall had to say:

“My degree from Arizona taught me how to learn, problem solve, and adapt to changes in my field.” -- John Kompare, BS SE 1990, MGM senior project manager, Las Vegas

“I convinced my husband to wear a UA T-shirt, even though, as a Washington State University alum, he’s the enemy this weekend!” -- Tanya Donohue (mother of freshman Brian Donohue), BS SE 1986, Boeing engineer, Seattle.