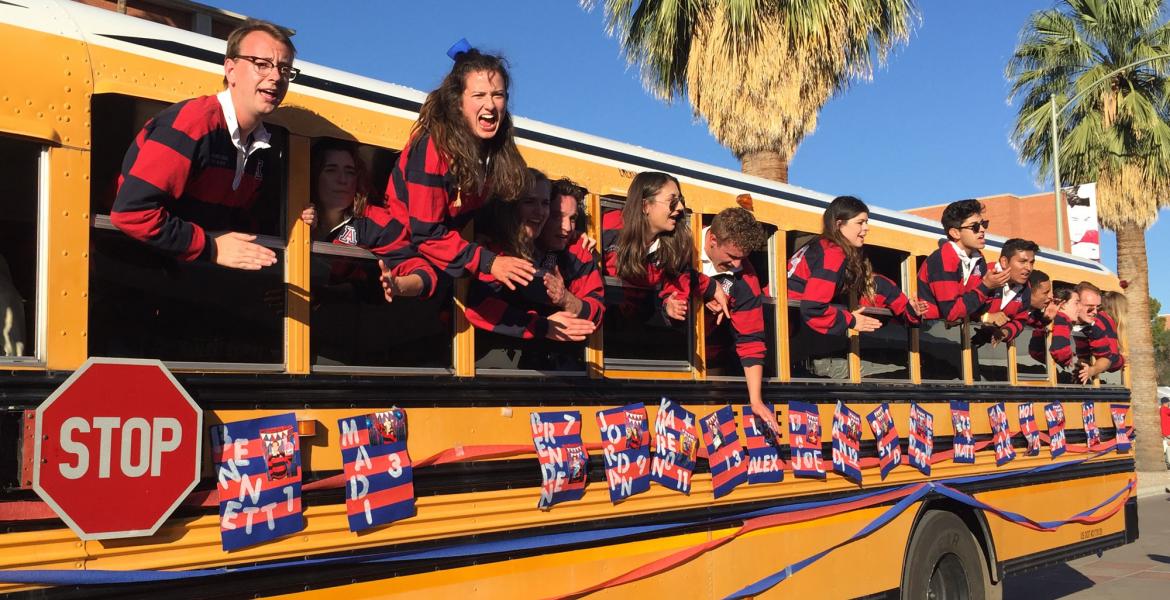 Members of the UA Chain Gang Junior Honorary celebrate Homecoming aboard a bus in the 2018 parade.
Home / Stories / Homecoming 2018: Honoring the Past, Looking to the Future

Homecoming 2018: Honoring the Past, Looking to the Future

By
Emily Dieckman
Time to read
3 minutes
Print
a- a+
Read so far
The College of Engineering honors its alumni, and alumni share their advice for successful careers, and successful lives, with current students.

More than 500 College of Engineering faculty, staff, students and alumni -- from the Class of 1949 all the way through the Class of 2018 -- gathered in the Student Union on Friday, Oct. 26, for the 55th annual University of Arizona Engineers Breakfast.

“It’s been quite a journey since I was here 20 years ago,” said the event’s keynote speaker, Chris Lewicki, CEO and president of asteroid mining company Planetary Resources, explaining that, on the way to the Engineers Breakfast, he’d caught a glimpse of the satellite tracking station where he’d conducted satellite operations for the very first time. “Before I was lobbying in Congress, I was lobbying department heads and deans for funding to build that.”

Lewicki, who graduated from UA with bachelor’s and master’s degrees in aerospace engineering in 1997 and 2000, said he was attracted to the UA for its focus on space exploration and its affordability, and encouraged students to seize the many opportunities available at his alma mater.

“In the last 10 years at Planetary Resources, I have had the opportunity to be involved in more things than I could have possibly imagined,” he said. “And I can trace the ability to do it and the gumption to do it all the way back to my days as president of a student group at the University of Arizona, my experience lobbying department heads and deans to get funding to build a project, and galvanizing teams and trying to figure out how to connect people.”

Nancy Pham, president of the Engineering Student Council and a first-generation American and college student, shared how meaningful her own experience in the college has been since she switched her major from biochemistry to biomedical engineering.

“Sitting in an Engineering 102A lecture, I knew I was exactly where I was meant to be,” she said. “I chose engineering because I was captivated by every aspect of it.”

Interim Dean Larry Head spoke about some of the college’s latest news, from a $30 million NASA grant awarded earlier in the semester to Armin Sorooshian to progress toward a cohesive four-year design program for undergraduates.

“It’s great to be here at the UA,” he said. “There’s so much going on, our days are packed, our students are excited. It’s a fun time.”

The day was a celebration of the people who made the College of Engineering what it is today, and the people who will lead it into the future, including the Fourth Industrial Revolution -- or the convergence of the physical, digital and biological realms -- a key part of the university’s new strategic plan.

“Engineering is all about the Fourth Industrial Revolution,” said UA President Robert C. Robbins, adding that he believes the college is in excellent hands. “We are incredibly fortunate to have leaders like Larry Head and Jeff Goldberg, former dean of the College of Engineering and current interim senior vice president of academic affairs and provost, on campus.”

Michelle Ash, chief innovation officer at Barrick Gold, spoke about the importance of innovation in the mining industry at the 13th annual Lacy Lecture, sponsored by the Department of Mining and Geological Engineering to honor the department’s founder and first head, Willard “Bill” Lacy.

She suggested technology ranging from improved communications and sensor systems to automated equipment and artificial intelligence could make the mining industry safer, more efficient and less wasteful, but that a diversity of voices is equally important in fostering progress.

“It’s not this black box that some innovation group does in the back room,” she said. “Innovation is everybody’s business.”

To Infinity and Beyond

Dylan E. Taylor, global president and chief operating officer at Colliers International and founder of the nonprofit Space for Humanity, was present at the Engineers Breakfast to accept his alumnus of the year award. Taylor graduated from the UA with his bachelor’s degree in materials science and engineering in 1993. As president of the Engineering Student Council during his senior year, he was responsible for introducing that year’s award winner -- an honor he said he never imagined receiving himself 25 years later.

He told students that taking time to reflect on life in all its aspects -- from career and finances to family, health and hobbies -- is a crucial part of being successful. To put it in engineering terms, he said, success is an optimization problem, not a maximization problem.

“They say that commercial airline flights are technically off course 99 percent of the flight, but minor computer-aided adjustments made every 60 seconds or so ensure it reaches its intended destination,” he said. “Living a life of reflection will help you do the same. It will help you optimize rather than falling into the trap of maximizing. It will ensure you reach your intended destination.”