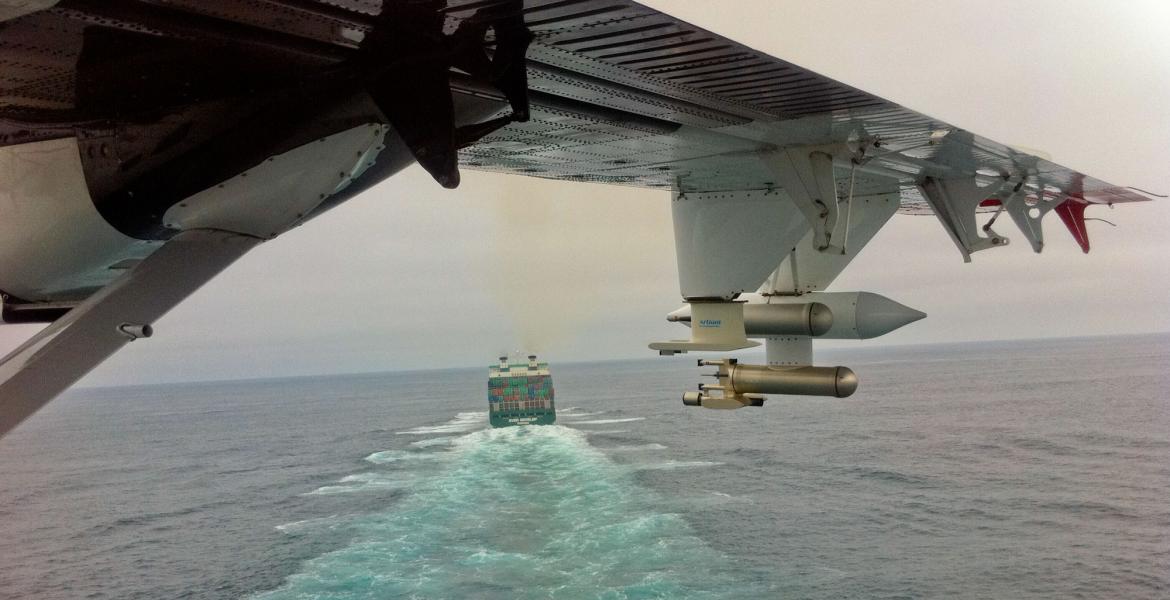 Armin Sorooshian will study aerosol particles, which are particularly prevalent over oceanic shipping routes, in the North Atlantic and research their effects on climate change.

By
Emily Dieckman
Time to read
2 minutes
Print
a- a+
Read so far
University of Arizona researcher will further investigation into tiny particles with huge impacts on climate, air quality and human health.

Armin Sorooshian, a professor of chemical and environmental engineering at the University of Arizona, has spent his career at high altitudes -- whether he's soaring above the Pacific Ocean collecting aerosol samples or in his lab atop the Physics and Atmospheric Sciences building examining them.

With a grant from NASA totaling up to $30 million over five years to research the interactions between aerosols and cloud properties over the Western Atlantic, Sorooshian has reached new heights.

"The selection of our project is a testament to the University of Arizona's role as a harmonizer between several institutions focusing on one of the most pressing issues impacting this planet: climate change," said Sorooshian, also a professor in hydrology and atmospheric sciences, and public health. "I am deeply humbled by the opportunity to lead this NASA mission to reduce uncertainty about human-caused effects on the atmosphere, specifically interactions between aerosol particles and clouds."

How the World Works

The funding comes from NASA's Earth Venture-class program, which funds projects investigating important, but not-well-understood aspects of Earth system processes. Sorooshian and four other investigators from around the United States make up the third cohort of Earth Venture suborbital investigators. NASA selected their projects for funding from among 30 proposals, and awardees will take to the field beginning in 2020.

Sorooshian has spent his career studying aerosols, microscopic particles that can be released into the air by everything from sea spray and pollen to vehicles and power plant emissions. While the particles affect areas including climate and human health, current understanding of their chemistry and the way they interact with elements such as moisture and change during their aging in the atmosphere is limited.

Sorooshian's investigation will focus on marine boundary layer clouds over the western North Atlantic Ocean that have a critical role in our planet's energy balance. From aboard two NASA research aircraft based at NASA's Langley Research Center in Hampton, Virginia -- an HU-25 Falcon and a B-200 King Air -- Sorooshian and his team will gather measurements from above, below and within the clouds. The project team includes Sorooshian and Xubin Zeng from the UA, plus scientists and engineers from NASA Langley Research Center and several other universities and research centers/labs.

"This NASA grant for earth investigations is a great achievement for Professor Sorooshian, the Engineering program and the University of Arizona," said UA President Robert C. Robbins. "Armin Sorooshian has long been a nationally recognized leader for his expertise in measuring the impact of aerosols on clouds. This is critical work for the future of our world and an outstanding example of the UA's capacity for positive impact globally."

Sorooshian earned his bachelor's degree at the University of Arizona and his MS and PhD degrees at the California Institute of Technology, all in chemical engineering. He has served as a reviewer on four NASA panels, and received the NASA Group Achievement Award for his team's work on the Studies of Emissions and Atmospheric Composition, Clouds and Climate Coupling by Regional Surveys, or SEAC4RS, mission.