By
Karina Barrentine
Time to read
2 minutes
Print
a- a+
Read so far
Navy, NASA aircraft field studies get UA scientists closer to missing pieces of the atmospheric puzzle. 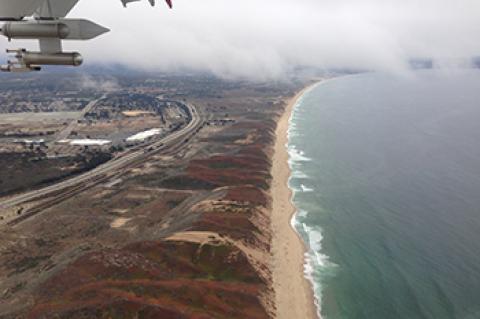 Air above the sea is relatively free of pollution, but there is almost always a persistent deck of clouds off the coast of California, and strong sources of aerosols are found above the shipping lanes between Long Beach and Oakland, making it a prime area for studying aerosol-cloud interactions.

Armin Sorooshian, a UA assistant professor of chemical and environmental engineering, and his research team are on a mission to find missing pieces of an atmospheric puzzle that will help scientists better understand aerosol-cloud interactions and predict climate change.

He and his team spent summer 2013 in the air above the United States aboard a Twin Otter and a DC-8 chasing what looked like haze, dust and smoke -- those little-understood ubiquitous aerosol particles -- to study their properties and help shed light on one of the biggest uncertainties of climate sensitivity.

The two aircraft field studies, one with the Navy based out of Monterey, Calif., the other part of a large NASA study, bring up the tail end of an intensive four-year project that started with Sorooshian’s Young Investigator Program Award from the Office of Naval Research, or ONR. The research focuses on how aerosols interact with clouds and how aerosol particles change when they are humidified.

“We go out and do the detailed measurements of aerosols and gases and clouds so we can have a better understanding of what humans and natural emissions are doing to the planet in terms of visibility, cloud formation and precipitation, and climate change,” said Sorooshian. 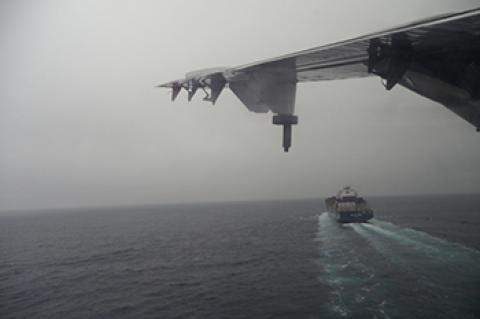 “We can get very, very clean areas and then a strong perturbation of aerosol concentration from these ships,” says Armin Sorooshian, UA assistant professor of chemical and environmental engineering. “It’s a tailor made experiment in the wild.” 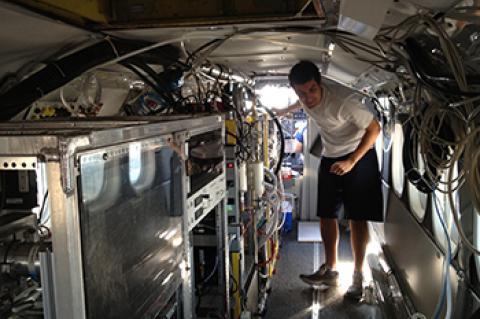 Aboard the Navy Twin Otter, Armin Sorooshian readies the instruments for a flight above the California coastline.
s with a diverse range of chemical makeup from a wide variety of sources -- desert dust, sea spray, volcanic eruptions, pollen, trees and plants, to name a few natural sources, and wildfires, vehicles, smelter and power plant emissions generated by humankind, for example. Aerosols float around in Earth’s atmosphere for a few hours, days or weeks before being washed away by rainfall or crashing to the ground. Though tiny and short-lived, these particles can have huge environmental and health effects.

“The properties of aerosol particles -- their size, their shape, their chemistry -- are incredibly complicated,” said Sorooshian, who has also conducted airborne studies above Arizona mine sites to determine how specific particles affect human health. “It is difficult to measure these things, and you really need knowledge of the properties to know how they will influence health, air quality and visibility, and climate.”

The 300-plus hours of flight time and mountains of data collected in summer-fall 2013 will go a long way toward filling in the blanks of the global-warming debate, a debate that has the UN Intergovernmental Panel on Climate Change finding in its September 2013 assessment report that the most uncertain force of climate change is aerosols. The measurements are also important to understanding and forecasting environmental factors critical to Navy operations.

“Once we know a little more about aerosols, their properties and how they interact with clouds, we can apply that knowledge to climate models to help predict long-range climate changes,” said Lindsay Maudlin, a UA doctoral candidate in atmospheric science, who was among five of Sorooshian’s graduate students to participate in the aircraft field studies over the summer.

Aerosols can cool the Earth’s surface because they reflect sunlight and seed cloud formation, possibly mitigating warming caused by greenhouse gases. However, some aerosols, such as black carbon from coal emissions, absorb sunlight and can cause atmospheric warming. Because aerosols comprise such a broad collection of particles, with vastly different properties, the degree to which each absorbs or deflects sunlight and assists in cloud and precipitation formation varies greatly, making it difficult to gauge their impact on Earth’s temperature and spatial distribution of rain and snow.

“We know greenhouse gases act as a lid when heat tries to escape, which causes warming. We know some aerosol particles, and the clouds they help form, bounce light back up right away and have a cooling effect,” said Sorooshian. “What we do not know is how much they offset each other. The magnitude of the cooling effect is highly uncertain.”

Once the mountains of data -- hundreds of thousands of samples and measurements -- collected aboard the Navy Twin Otter, NASA DC-8, and on the ground in California and Texas are sifted and analyzed, the studies promise to provide critical information about climate change, visibility, clouds, and how aerosol particles affect health.