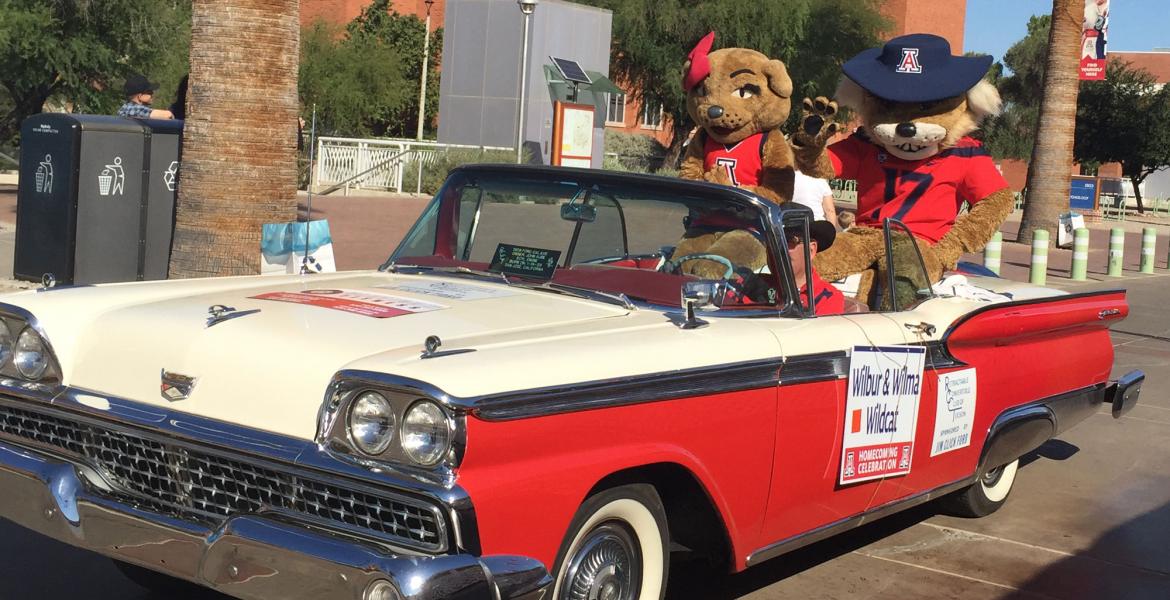 Wilma and Wilbur Wildcat parade past the College of Engineering tent on the UA Mall.
Home / Stories / UA Engineering Homecoming 2017: High-Powered and Full of Heart

By
Jill Goetz
Time to read
4 minutes
Print
a- a+
Read so far
University of Arizona alumni in biomedicine, aviation, construction and energy share stories of starting new ventures and leading Fortune 500 companies.

Honored alumni and guests at the UA College of Engineering’s 2017 Homecoming celebrations have climbed some of the world’s highest mountains and constructed some of its tallest buildings.

Their aims are lofty, too: eradicating preventable blindness, medevac’ing wounded people around the world, instilling ethics in business -- even distilling a true Wildcat spirit.

They all conveyed, in their own ways, a singular message at the 54th annual Engineers Breakfast: The secret to engineering success is equal parts technical mastery and passion.

More than 400 University of Arizona alumni, faculty, students and industry partners attended the Engineers Breakfast, which also celebrated the first 13 inductees in the College of Engineering Hall of Fame, three of whom were in the audience. The Homecoming kickoff event was held in the Student Union Memorial Center on Oct. 27.

Keynote speaker Andy Doraiswamy did not pursue a job or graduate school after getting his UA master’s degree in materials science and engineering in 2003.

“I sold my car, rented a motorcycle and spent six months traveling throughout southeast Asia,” he said. “I really wanted to find myself, find my purpose.”

He mountaineered in Nepal and visited remote villages, including one with a free eye surgery clinic. He saw up close how people in the country were going blind simply because of cataracts.

“I knew nothing about health care, but I knew this blindness could be prevented,” said Doraiswamy, who volunteered at the clinic and found his calling.

He returned to the U.S. and earned a PhD in biomedical engineering from the University of North Carolina at Chapel Hill, developed 3-D and rapid laser technologies, and founded San Francisco Bay Area startup Oculeve, which was later purchased by Allergan for $425 million. Now Doraiswamy advises early-stage health care companies and serves on the board of Surgical Eye Expeditions International.

In his campus address, he hailed recent advances in medical technology, particularly connected health, but had harsh words for the U.S. health care system, particularly its inefficiency and high cost.

College of Engineering Dean Jeff Goldberg presented three awards on behalf of the College and the University of Arizona Alumni Foundation.

Alan Boeckmann joined Fluor Corp., an engineering and construction firm specializing in large and complex international projects, just out of college and rose through the ranks to become its chairman and CEO. Company revenues topped $27 billion when he retired in 2012.

Boeckmann serves on the boards of British Petroleum, Archer Daniels Midland and Sempra Energy and has served on many others. His weighty credentials and powerful posts belie humble beginnings and an abiding commitment to ethics in business.

In a note to the UA Alumni Association, the Bisbee, Arizona, native described how he enrolled at the UA in 1966 but dropped out due to a shortage of funds and focus.

“Two years later, while working at the local telephone company as an installer, I reignited my desire to earn a BSEE degree,” he wrote. “I re-enrolled, moved into married housing … and began to work diligently to improve my GPA.”

At Fluor, Boeckmann led global operations in several countries. He founded the Anti-Corruption Task Force of the World Economic Forum in 2004 to combat bribery and corruption in global commerce. His leadership in promoting international standards for business and engineering ethics earned Fluor numerous awards.

“We honor Alan not only for his remarkable professional achievements, but for his ability to understand and operate in many different cultures, always in an ethical way,” said Goldberg, thanking Boeckmann for his philanthropic support of the College and University, including serving on the College’s Industry Partner Board.

“One of the most valuable and underrated abilities of an engineer is the power to inspire others,” said White, a civil engineering senior. “I was inspired to pursue a degree in engineering by my grandfather. When I was younger, he would tell me about the problems he solved, the people he worked with, and the opportunities he had, and I thought that was the coolest job in the whole world. He was a civil engineer for Fluor, back when it was still Fluor Daniel.”

“I have had a passion for planes since I was a kid,” said Michael Slattery, president of United Rotorcraft, a world leader in emergency medical air transport.

The Tucson native recalled his mother, who was in the audience with other family members, driving him to a now-defunct airport off West Prince Road in Tucson.

“She would park at the end of the road so her 10-year-old son could watch a plane land every 10 minutes. That’s unconditional love!”

Slattery became a licensed pilot and worked on major medical evacuation projects, including the Black Hawk Medevac, L-1011 Flying Hospital and S-70 Firehawk, and has served as a consultant to the aviation industry.

Passing on his passion to students at the breakfast, he said, “The classes and technical proficiency are important, but having it right here in your heart to want to change people’s lives -- that’s what will make you a success.”

United Rotorcraft has supported team projects for the University of Arizona Engineering Design Program, and Slattery has served as a judge at Design Day.

Ryan Kanto worked in the oil and gas industry, becoming a vice president of production at Rice Energy in 2011, the same year he completed an Ironman event. He ascended to two more VP posts at Rice before leaving the company in April 2017 to co-found, with his wife Sarah Kanto, Quantum Spirits distillery in Carnegie, Pennsylvania.

The startup draws on Kanto’s chemical engineering and business acumen and 15 years of home-brewing experience. He describes himself as a “trained engineer instilled with a permanent sense of wonder” and hopes to start producing Quantum’s custom spirits in 2018. A founding member of the College of Engineering’s Young Alumni Board, he will continue sharing career tips -- not to mention cocktail recipes -- with other Wildcats.

Later that day, alumni and friends participated in departmental events. On Saturday, visitors at the College’s tailgating tent watched the Homecoming Parade on the UA Mall before gathering in Arizona Stadium to cheer the Wildcats to a 58-37 victory over Washington State.