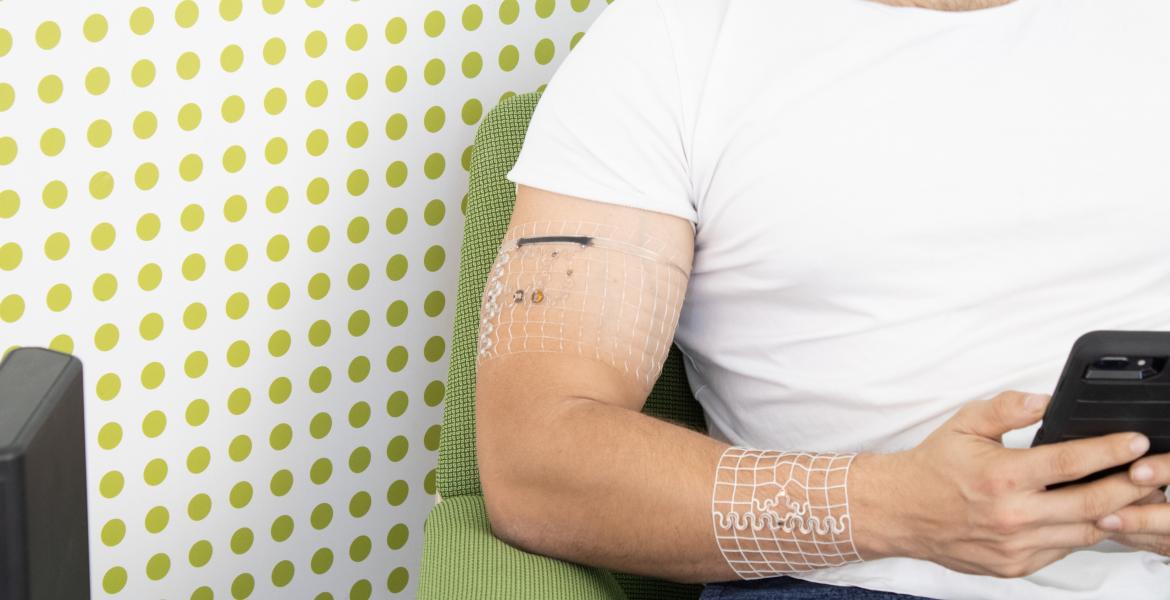 University of Arizona engineers have developed a way to 3D-print medical-grade wearable devices, such as these ones, based on body scans of the wearer.

By
Emily Dieckman
Time to read
2 minutes
Print
a- a+
Read so far
The new devices, custom made to fit individuals, could mean massive improvements in the monitoring and treatment of diseases, the testing of new drugs and the ability to track personal health.

Wearable sensors to monitor everything from step count to heart rate are nearly ubiquitous. But for scenarios such as measuring the onset of frailty in older adults, promptly diagnosing deadly diseases, testing the efficacy of new drugs or tracking the performance of professional athletes, medical-grade devices are needed.

University of Arizona engineers have developed a type of wearable they call a "biosymbiotic device," which has several unprecedented benefits. Not only are the devices custom 3D-printed and based on body scans of wearers, but they can operate continuously using a combination of wireless power transfer and compact energy storage. The team, led by Philipp Gutruf, assistant professor of biomedical engineering and Craig M. Berge Faculty Fellow in the College of Engineering, published its findings today in the journal Science Advances.

"There's nothing like this out there," said Gutruf, a member of the university's BIO5 Institute. "We introduce a completely new concept of tailoring a device directly to a person and using wireless power casting to allow the device to operate 24/7 without ever needing to recharge."

Current wearable sensors face various limitations. Smartwatches, for example, need to be charged, and they can only gather limited amounts of data due to their placement on the wrist. By using 3D scans of a wearer's body, which can be gathered via methods including MRIs, CT scans and even carefully combined smartphone images, Gutruf and his team can 3D-print custom-fitted devices that wrap around various body parts. Think a virtually unnoticeable, lightweight, breathable, mesh cuff designed specifically for your bicep, calf or torso. The ability to specialize sensor placement allows researchers to measure physiological parameters they otherwise couldn't.

"If you want something close to core body temperature continuously, for example, you'd want to place the sensor in the armpit. Or, if you want to measure the way your bicep deforms during exercise, we can place a sensor in the devices that can accomplish that," said Tucker Stuart, a doctoral student in biomedical engineering and first author on the paper. "Because of the way we fabricate the device and attach it to the body, we're able to use it to gather data a traditional, wrist-mounted wearable device wouldn't be able to collect."

Because these biosymbiotic devices are custom fitted to the wearer, they're also highly sensitive. Gutruf's team tested the device's ability to monitor parameters including temperature and strain while a person jumped, walked on a treadmill and used a rowing machine. In the rowing machine test, subjects wore multiple devices, tracking exercise intensity and the way muscles deformed with fine detail. The devices were accurate enough to detect body temperature changes induced by walking up a single flight of stairs.

Gutruf and his team aren't the first to adapt wearables to track health and body function. However, current wearables do not have the ability to track metrics continuously, or with enough precision to make medically meaningful conclusions.

Some wearables used by researchers are patches that stick to the skin, but they come off when skin goes through its normal shedding process, or sometimes when a subject sweats. Even highly sophisticated wearables used in clinical settings, such as ECG monitors, face these issues. Also, they aren't wireless, which severely limits mobility. Patients can't go about their normal daily routines if they're tethered to bulky external devices.

The biosymbiotic device that Gutruf's team has introduced uses no adhesive, and it receives its power from a wireless system with a range of several meters. The device also includes a small energy storage unit, so that it will function even if the wearer goes out of the system's range, including out of the house.

"These devices are designed to require no interaction with the wearer," Gutruf said. "It's as simple as putting the device on. Then you forget about it, and it does its job."

This research was funded by the Flinn Foundation Translational Bioscience Seed Grants Pilot Program. The team has also been working with Tech Launch Arizona, the commercialization arm of the university, to protect the intellectual property and launch a startup to bring the technology to market.