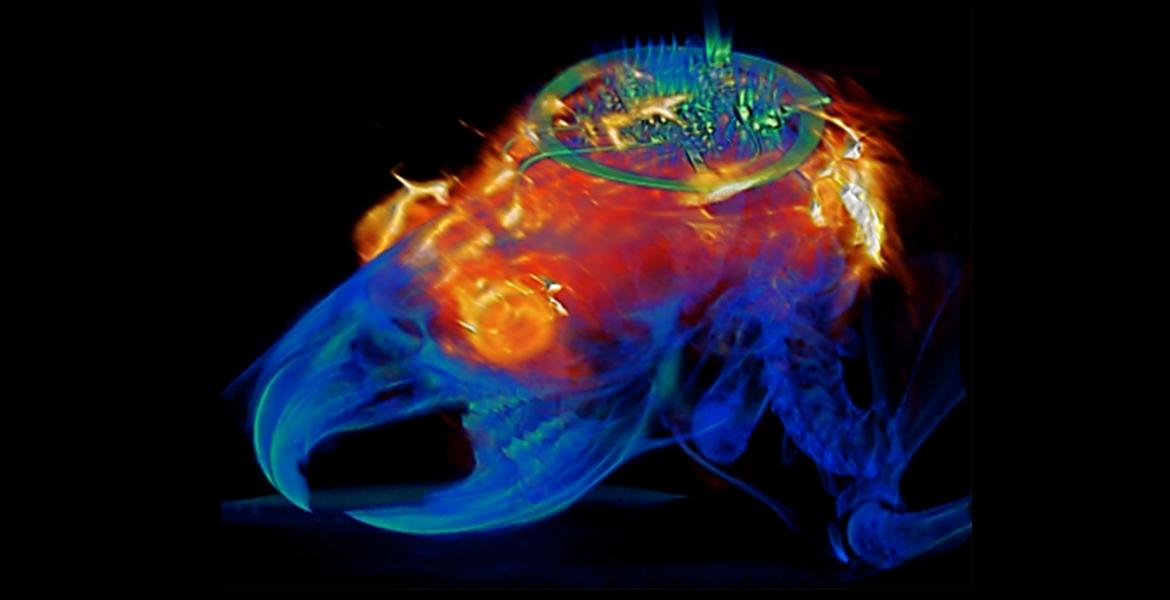 Combined image analysis with MRI and CT results superimposed on a 3D rendering of the animal implanted with the programmable bilateral multi µ-ILED device.
Home / Stories / Controlling Neurons With Light, but Without Wires or Batteries

Controlling Neurons With Light, but Without Wires or Batteries

By
Emily Dieckman
Time to read
2 minutes
Print
a- a+
Read so far
Research by UA professor reveals a more sophisticated method for delivering light to control neurons in the brain -- which could ultimately mean turning off pain receptors or reducing the effects of severe neurological disorders.

Optogenetics is a biological technique that uses light to turn specific neuron groups in the brain on or off. For example, researchers might use optogenetic stimulation to restore movement in case of paralysis or, in the future, to turn off the areas of the brain or spine that cause pain, eliminating the need for -- and the increasing dependence on -- opioids and other painkillers.

“We’re making these tools to understand how different parts of the brain work,” said Gutruf, who is also a member of the BIO5 Institute. “The advantage with optogenetics is that you have cell specificity: You can target specific groups of neurons and investigate their function and relation in the context of the whole brain.”

In optogenetics, researchers load specific neurons with proteins called opsins, which convert light to electrical potentials that make up the function of a neuron. When a researcher shines light on an area of the brain, it activates only the opsin-loaded neurons.

The first iterations of optogenetics involved sending light to the brain through optical fibers, which meant that test subjects were physically tethered to a control station. Researchers went on to develop a battery-free technique using wireless electronics, which meant subjects could move freely.

But these devices still came with their own limitations -- they were bulky and often attached visibly outside the skull, they didn’t allow for precise control of the light’s frequency or intensity, and they could only stimulate one area of the brain at a time.

“With this research, we went two to three steps further,” Gutruf said. “We were able to implement digital control over intensity and frequency of the light being emitted, and the devices are very miniaturized, so they can be implanted under the scalp. We can also independently stimulate multiple places in the brain of the same subject, which also wasn’t possible before.”

The wireless, battery-free implants are powered by external oscillating magnetic fields, and, despite their advanced capabilities, are not significantly larger or heavier than past versions. In addition, a new antenna design has eliminated a problem faced by past versions of optogenetic devices, in which the strength of the signal being transmitted to the device varied depending on the angle of the brain: A subject would turn its head and the signal would weaken.

“This system has two antennas in one enclosure, in which we switch the signal back and forth very rapidly so we can power the implant at any orientation,” Gutruf said. “In the future, this technique could provide battery-free implants that provide uninterrupted stimulation without the need to remove or replace the device, resulting in less invasive procedures than current pacemaker or stimulation techniques.”

Devices are implanted with a simple surgical procedure similar to surgeries in which humans are fitted with neurostimulators, or “brain pacemakers.” They cause no adverse effects to subjects, and their functionality doesn’t degrade in the body over time. This could have implications for medical devices like pacemakers, which currently need to be replaced every five to 15 years.

The research described in the paper also demonstrated that animals implanted with these devices can be safely imaged with computer tomography, or CT, and magnetic resonance imaging, or MRI, which allow for advanced insights into clinically relevant parameters such as the state of bone and tissue and the placement of the device.