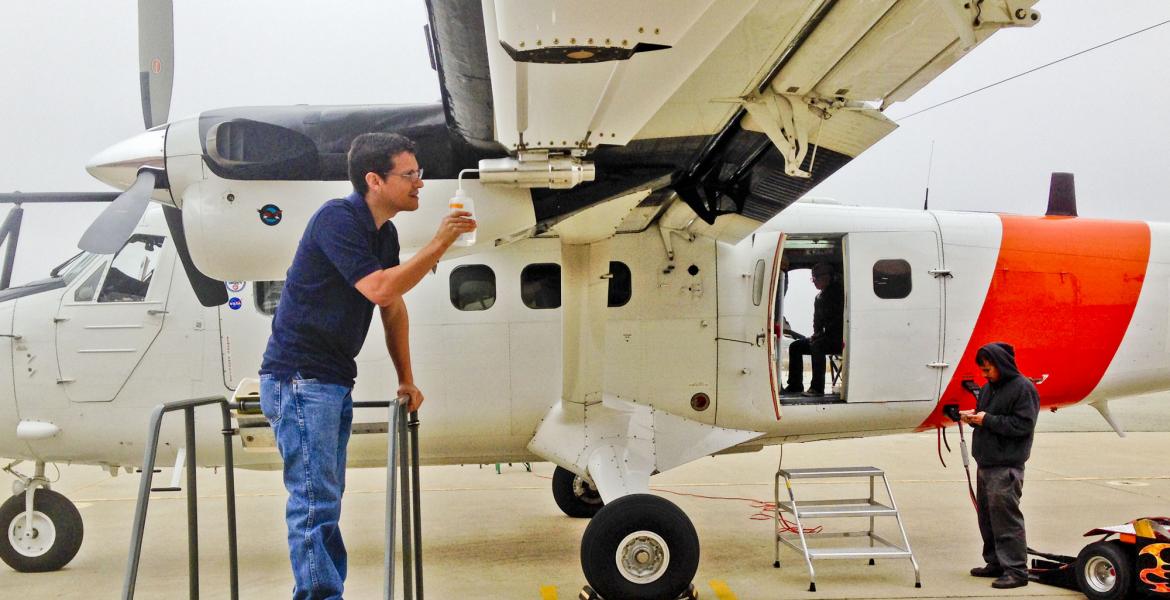 Grad student Alex MacDonald checks air-sampling equipment mounted on the wing of a Navy Twin Otter before setting off on an airborne research mission.

Now, he’s worked his way up at the University of Arizona, in more ways than one. There’s the fact that his Tucson Aerosol Characterization Observatory Lab -- affectionately known as the TACO lab -- is perched atop the Physics and Atmospheric Sciences building, and there’s his array of accomplishments, including being named a College of Engineering Education Faculty Fellow, an Office of Naval Research Young Investigator Award recipient and, most recently, being named a da Vinci Fellow.

“I feel like I’ve lived my life through this college, and that’s why this honor is extremely special to me,” Sorooshian said of the award. “It’s very humbling, especially since I was a student here, and now I’m on the other side of the table trying to give back to students.”

Sorooshian was set on becoming a doctor until his senior year of college, when he realized he only wanted to get into medical school to prove he could do something as challenging as getting into medical school. He settled for trying to become a professor, figuring it was just about the second hardest field to get into, and he’d actually enjoy it.

Up in the Clouds

In the TACO lab, a cloud condensation nuclei counter hums in the background, continually gathering data about the air outside the lab. It captures the number of aerosol particles per cubic centimeter of air -- called cloud nuclei because water particles in the atmosphere need something to anchor to before they can start gathering into clouds -- then organizes them by size. The data on the screen changes as the air outside shifts.

Armin’s scientific talent and collegiality, combined with an incredible level of curiosity, energy and sheer hard work, place him among a small handful of the most talented faculty I have worked with."

Sorooshian’s work examines how aerosol particles affect the atmosphere, affecting everything from climate to air breathability. A cloud’s lifetime and ability to reflect sunlight and produce precipitation is affected by the number of aerosol particles in the air. His research is also connected to public health. When humans breathe aerosol particles into the humid atmosphere of their mouth and lungs, a similar condensation process occurs, causing the particles to grow and potentially be deposited into the respiratory system.

The work is as important as it is broad.

Sorooshian developed an interest in airplanes toward the end of his undergraduate career, which makes this field a good fit, as he spends many of his summers up in planes gathering air samples for testing. But what makes those trips really worth it for him is being able to bring students along.

“I really regard my job as being focused on students, and everything expands around that,” he said. “To see the looks on these students’ faces and how intense these research activities can be, it’s probably the best part of my job,” said Sorooshian, who is an adviser for the National Society of Collegiate Scholars, a University Faculty Fellow at the Arizona’s Science, Engineering and Math Scholars program and an adviser for the UA chapter of the American Institute of Chemical Engineers.

Leah Kaplan, a chemical engineering senior and recent recipient of the Freeman Medal, first met Sorooshian her freshman year through the Flinn Scholars program and said she has benefitted from his mentorship ever since.

“Dr. S. is a busy guy. He’s teaching classes, he’s researching, and I know he’s working on a really big research grant right now,” Kaplan said. “But if I email him with a question, or sometimes I’ve had a situation where I just found out about an opportunity, the deadline’s in a week and I’m freaking out because I need a letter of recommendation, he’ll say ‘No problem. I’ll take care of it this afternoon.’ That’s huge that he cares enough to take the time.”

Though Sorooshian believes students are the most important part of his work, his cross-disciplinary, award-winning research also impresses his colleagues, such as Raina Maier, a professor in College of Agriculture and Life Sciences.

“Armin’s scientific talent and collegiality, combined with an incredible level of curiosity, energy, and sheer hard work, places him among a small handful of the most talented faculty I have worked with during my career,” she said.