By
Jill Goetz
Time to read
3 minutes
Print
a- a+
Read so far
Scientists know that aerosols affect climate, but they don’t know how. A University of Arizona chemical engineer is chasing clouds for answers and giving his students top-flight experience.

For a chemical engineer whose research is funded mainly by the U.S. Navy, Armin Sorooshian spends a lot of time with his head in the clouds. 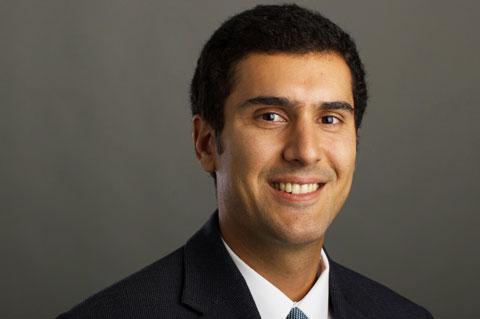 Aboard tricked-out research planes over land and sea, the University of Arizona associate professor of chemical and environmental engineering and his graduate students have for several summers studied aerosols -- tiny airborne particles that form clouds, alter weather patterns and affect air quality.

“Usually what comes to mind when one thinks of chemical engineering is a chemical plant with mixers stirring, steam flowing and chemicals reacting,” said Alex MacDonald, a doctoral student in chemical engineering who conducted research during summer 2016 on aerosol samples collected from a Navy Twin Otter, a non-pressurized turboprop survey plane capable of flying at slow speeds.

“It turns out that the atmosphere is like a big chemical plant -- with clean and dirty air mixing, clouds flowing and chemicals reacting. Chemical engineering actually has a lot to contribute to atmospheric science,” MacDonald said.

The massive Big Sur Fire -- which erupted in late July 2016, burned for three months and was one of the most expensive fires in U.S. history -- gave him and chemical engineering PhD student Hossein Dadashazar unprecedented opportunities to capture real-time aerial images and aerosol samples. The researchers are in the process of analyzing the samples, comparing chemical composition to aerosol samples from clean air.

Aerosol particles contain solid or liquid droplets and range in size from a few nanometers to the width of a human hair. Their composition and interactions with clouds and solar radiation are poorly understood.

According to the Intergovernmental Panel on Climate Change, aerosols pose the biggest uncertainty in quantifying how the planet’s climate is changing due to anthropogenic, or human-caused, emissions.

Most aerosols occur naturally, from volcanoes, forest fires and sea spray, for example, deflecting solar radiation from Earth and forming clouds that bring rainfall -- cooling the air. But some aerosols from human activities, particularly fossil fuel combustion, warm the air, and are believed to play a major role in global warming. They are also the source of haze and soot over cities from Beijing to Los Angeles.

Whatever their source, these airborne specks can wreak havoc on the health of people and the planet.

“Better understanding aerosols not only has implications for climate change but for people vulnerable to the effects of inhaling particulate matter,” said Sorooshian, who has asthma. “Many people are surprised to learn that poor air quality contributes to more deaths worldwide than any other environmental cause.”

The U.S. Office of Naval Research is interested in Sorooshian’s work because aerosols reduce visibility for pilots on aircraft and ships, impede weapons positioning, and interfere with communications signals. The ONR gave Sorooshian a prestigious Young Investigator Award in 2010 and has provided ongoing funding, the latest of which is a three-year $500,000 grant that took effect in May 2016.

Airborne atmospheric research is not for everyone, said Sorooshian, who earned his bachelor’s degree in chemical engineering at the UA and master’s and doctoral degrees in the same field from the California Institute of Technology before joining the UA faculty in 2009.

“It can be quite a ride when you are directing pilots, monitoring and troubleshooting instruments, and trying to maintain balance during turbulence -- especially when flying behind container ships or over warm cities. It is quite often that I fall off my seat.”

The flying may get rough, but the fieldwork gives student researchers rock-solid credentials.

Lindsay Maudlin did research aboard the Twin Otter in 2013 while she was a master’s student in atmospheric science and continued working with Sorooshian as a first-year PhD student and National Science Foundation graduate STEM fellow in K-12 education. She is a doctoral student in marine, earth and atmospheric sciences at North Carolina State University in Raleigh and a 2016-2017 Global Change fellow through a program sponsored by the university’s Southeast Climate Science Center and U.S. Department of Interior.

“I went to the University of Arizona specifically to work with Armin,” said Maudlin, who hopes to teach at a major university. “I knew I wanted to focus on fieldwork and that Armin’s group specialized in it.”

Two other former graduate students who studied aerosols with Sorooshian aboard NASA’s DC-8, a commercial-sized research plane based at the Johnson Space Center in Houston, are postdocs at the NASA Langley Research Center in Virginia.

“When we do these field projects with NASA,” said Sorooshian, “there can be 100-plus scientists working on a single plane, and they meet my students. In Ewan and Taylor, they liked what they saw: good communicators with excellent technical skills. Those airborne interactions were like job interviews.”