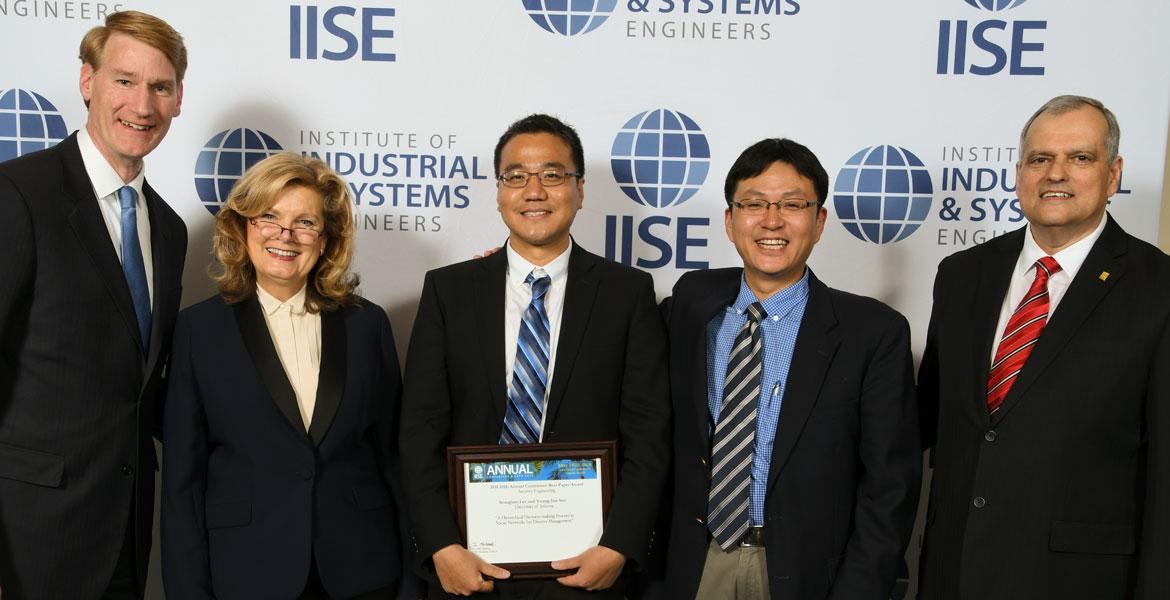 Young-Jun Son and Students Earn Another Year of National Recognition

By
Emily Dieckman
Time to read
2 minutes
Print
a- a+
Read so far
Papers on modeling human behavior, from responses to natural disaster to delicate hand movements, receive awards at annual IISE conference.

The Institute of Industrial and Systems Engineers, or IISE, recognized Young-Jun Son, head of the Department of Systems and Industrial Engineering, and his students with awards for two papers at the organization’s annual conference in Orlando in May.

Son and PhD candidate Seunghan Lee cowrote “A Hierarchical Decision-making Process in Social Networks for Disaster Management,” which received the Best Paper Award in the area of security engineering. The paper develops human behavior models to predict how people might act and interact during unforeseen emergencies such as hurricanes.

As part of a project funded by NSF, Son and Lee have been collaborating with Qing He, Rajan Batta and their graduate students at the University of Buffalo to examine how social media like Twitter is used in the wake of natural disasters. Using historical data about how people reacted to and shared information about previous hurricanes, the researchers have been developing a simulation model to predict how people might react in a similar situation, and what “information providers” like government and humanitarian agencies, as well as “product providers” like grocery stores, could do to prepare.

“Once we develop a simulation model that can account for individual behaviors, it can be used to estimate demand in the future,” Son said. “It can be used to support governments in making the best decisions in terms of effective disaster management.”

In a project funded by the U.S. Department of Agriculture, Son and his team used specialized data gloves to detect and track the hand motion of expert workers grafting tomatoes in an agricultural operations facility. The continuous stream of data will be used to create a machine learning algorithm that could ultimately, using VR technology, help others learn how to make the same expert hand movements. While the research was funded by the USDA, Son explained the work could potentially be applied to anything involving specific hand movements -- teaching sign language, for example.

“If we can understand the behavior of experts, when the beginners and novices are performing the same task, we can correct them, train them how to do it differently, and compare their errors to the experts,” Son said.

The three student co-authors are no stranger to success: The trio also received second place in the Department of Systems and Industrial Engineering 2017 graduate student poster competition. Masoud said she was honored and grateful to have her work recognized.

“Dr. Son is a great adviser,” Lee added. “He gave me a chance to attend this conference, where I met a lot of people from different groups who gave me valuable comments that will help me with my future research,” he said.

Son's group has seen similar success at past IISE gatherings, winning best paper in the modeling and simulation category in 2005 and 2009, in the homeland security category in 2008, and in the service and work systems category in 2016.

“It’s always a lot of fun to identify and work on challenging research problems arising in real-life scenarios,” Son said. “I always feel very fortunate to have had a strong list of highly talented and passionate students in our research group. I am very proud of them.”