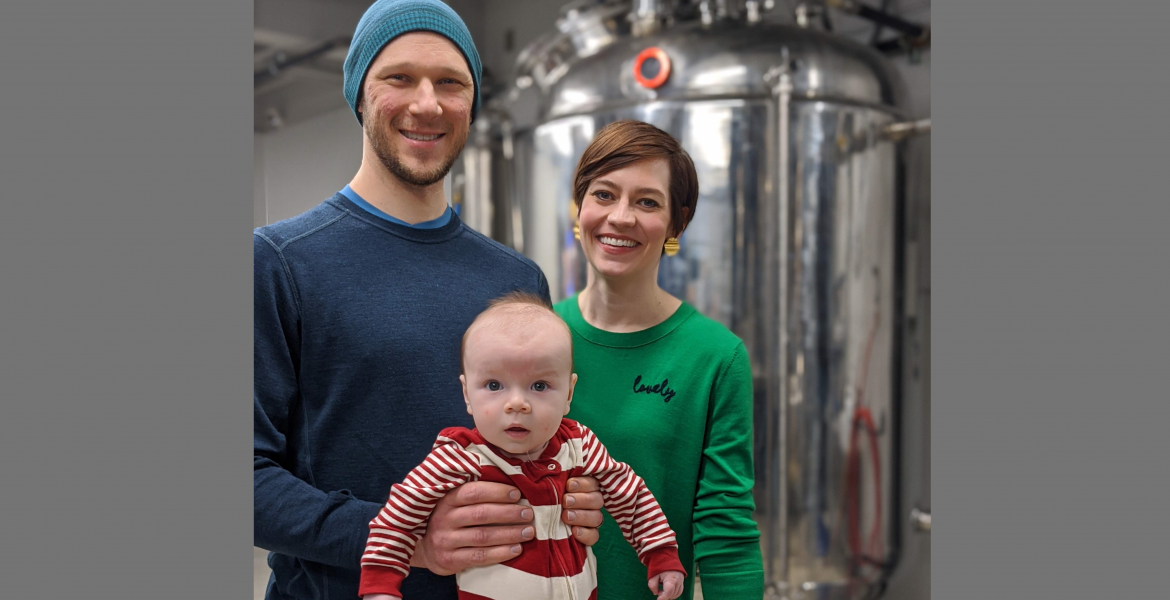 Ryan, Sarah and Raggie Kanto in the production room at Quantum Spirits.

By
Emily Dieckman
Time to read
2 minutes
Print
a- a+
Read so far
Engineering alumnus shifts to hand sanitizer production at craft distillery.

In the face of shortages caused by the COVID-19 pandemic, many businesses are changing their production models to contribute to public health and safety efforts. University of Arizona College of Engineering alumnus Ryan Kanto and his wife, Sarah Kanto, are now using their craft distillery to produce hand sanitizer.

The product has flown off the shelves in stores, but the Kantos, who opened Quantum Spirits in Carnegie, Pennsylvania, in 2018, decided to act when industries like the local sewer and water networks began asking them for help. Distilleries have become go-to sources for hand sanitizer manufacturing because they have the most important raw ingredient: alcohol. Hand sanitizer is 80% ethanol, combined with a bit of glycerin for moisture retention and hydrogen peroxide to kill off spores.

“It’s a very simple recipe, all things considered,” Ryan said. “We make ethanol, which is the most important part.”

Regulatory government bodies, including the Alcohol and Tobacco Tax and Trade Bureau, began relaxing restrictions and allowing distilleries to produce hand sanitizer last month in response to the COVID-19 outbreak.

The Kantos are providing it primarily to organizations that support critical infrastructure, like the sewer and water authority, and first responders -- people who are working in the field and don’t have immediate access to soap and water. Ryan said it’s been inspiring to watch distillers across the state come together, trading ingredients to keep production levels high.

Despite their tasting room and bars being closed for the time being, the Kantos, who provide benefits to all of their full-time employees, do not intend to lay anyone off. Selling a portion of the hand sanitizer to commercial entities is helping them keep their employees paid while normal production is shut down.

“We invest in our people, and we are going to aggressively try to keep everyone,” he said.

Production is still ramping up, but the distillery is making about 80 gallons of hand sanitizer a week, with plans to double or triple output. Because making beer is one of the early steps in the distilling process, the Kantos are also looking into collaborations with local breweries. They can take beer from brewers and further distill it into hand sanitizer.

The Kantos are helping out their community in other ways, too -- sponsoring meals at a local restaurant to feed laid-off hospitality employees and raising funds for local organizations that support these workers. While they’ve temporarily suspended spirit production to dedicate resources to hand sanitizer, Quantum Spirits’ social media feeds still feature content like home cocktail-making tutorials.

“It sounds really simple, but you know when you’ve been trapped at home or don’t have a lot of social contact, things like that really help,” Kanto said.

Kanto, who earned his bachelor’s degree in chemical engineering and engineering management at the University of Arizona in 2007, said his background as an engineer left him well prepared to pivot the business model of Quantum Spirits.

“Engineers, we’re all about problem solving and entrepreneurship and being creative,” he said. “Studying chemical engineering and engineering management were extremely critical. Without that background and those skills, I don’t think I would have been able to pull it off.”