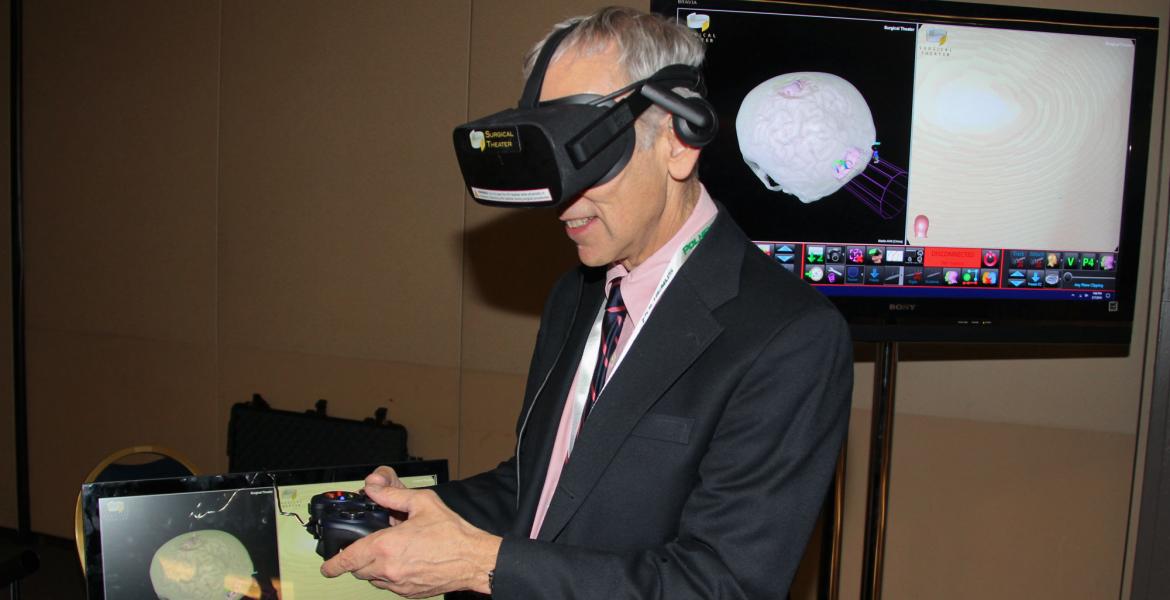 Dr. Marvin Slepian, co-chair of the 2019 Virtual Reality and Healthcare Symposium at the University of Arizona, tries on some VR goggles at the symposium's vendor exhibition.

“I thought it was appropriate to start with a little Dickens,” he said. “That was stated more than 150 years ago. But if you reflect on where we are in health care today, we are really in the same situation.”

While technology has made data more accessible to patients and doctors all over the world, many suffer from information overload. Physicians are increasingly busy sorting through data, meaning many have less time to spend face to face with patients. There are also diabetes and obesity pandemics, an opiate addiction problem and an ever-growing population of seniors.

Slepian is on the faculty of the UA Department of Biomedical Engineering, where he serves as a clinical professor and associate department head for biomedical engineering clinical and industrial affairs. He is also a professor of medicine, materials science and engineering, and medical imaging; a member of the Sarver Heart Center and the BIO5 Institute; and a McGuire Scholar in the Eller College of Management.

Sound futuristic? Jeff Goldberg, interim provost and senior vice president of academic affairs for the UA, agreed, pointing out that much of the technology in the “Star Trek” series he loved growing up exists in today’s world. To him, the most fascinating piece of tech in the series was the holodeck, a VR environment.

“The ability to go into a room and do anything, any time with any people you like presents a world of opportunities,” he said. “There’s really limitless potential.”

Virtual Reality Is the New Reality

Walter Greenleaf, conference co-chair and behavioral neuroscientist at Stanford University, spoke in his keynote about the form some of that limitless potential is already taking in the world of VR. For example, how can training physicians in VR environments teach them the skill of empathy? He used the example of how people walking on a plank in VR often experience vertigo, and step with hesitation even though they’re really on solid ground.

Greenleaf believes immersive technologies like VR will be a major component of future health care, pointing to predictions that VR will be adopted by 30 million users within the next three years, and that by 2025 the market for medical VR and augmented reality will be worth $5.1 billion.

“Every medical device is being reinvented,” he said. “Academic research has indicated that VR can effectively treat a wide variety of clinical problems -- ranging from addictions to stroke to PTSD.”

Age progressing, which shows how the effects of lifestyle choices like lack of exercise, unhealthy eating and excessive alcohol consumption will manifest in a person’s future appearance, has been shown to be effective in promoting positive behaviors such as saving for retirement.

“It’s pretty motivating for people to see how their behavior will affect their future self,” Greenleaf said. “You can imagine if you want to cut back on alcohol consumption, you walk into a bar, your phone rings and it’s your future self saying, ‘Hey buddy, I thought we talked about this.’”

VR tech is also being used in clinical training. UA researcher Jerzy Rozenblit is using augmented reality to help medical students practice laparoscopic surgery. Greenleaf was enthusiastic about using it to train clinicians in empathy as well. After the 2017 Mexico City earthquake, a team brought in mobile VR technology for survivors to help reduce stress and anxiety levels.

Other applications include helping children prepare for major surgeries by giving them virtual hospital tours, using VR avatars for physicians to communicate with patients in different languages and allowing medical students to take apart organs in VR to see how they work.

Greenleaf and Slepian agreed: Gatherings like this are key opportunities for members of industry and academia with different backgrounds to collaborate on where to take VR in health care next.

“I think the key to advancing this field is to interdigitate, to mix and match from different domains,” Slepian said. “That’s how innovation really moves forward.”