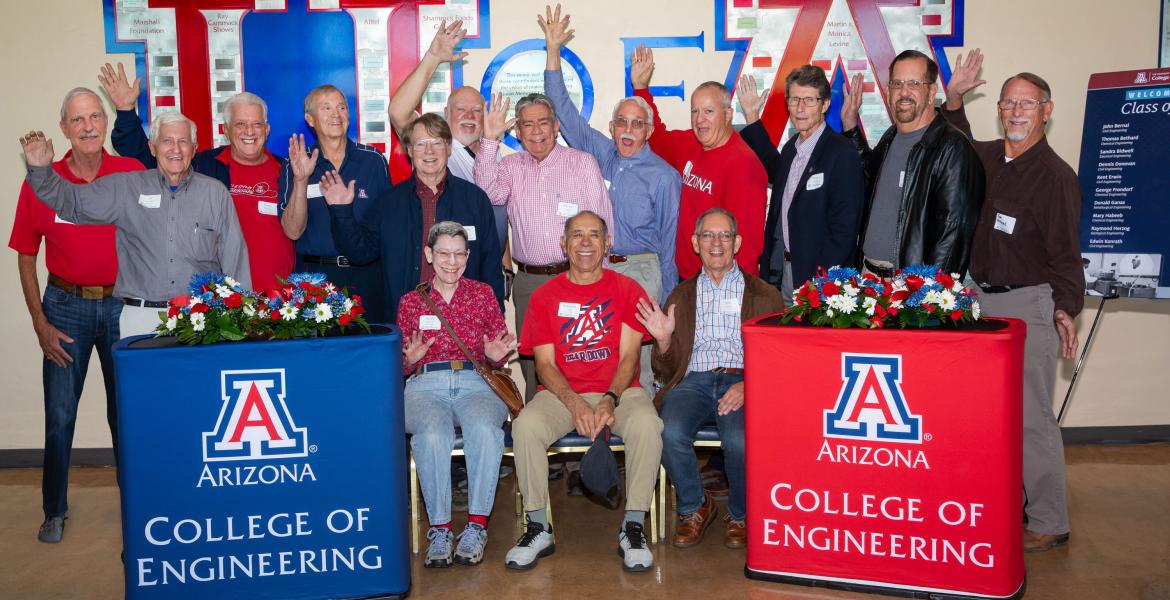 Members of the Class of 1969 celebrate their 50th college reunion at the 2019 Engineers Breakfast. (Photo: Martha Lochert)

By
Emily Dieckman
Time to read
4 minutes
Print
a- a+
Read so far
Homecoming brings 50th reunion class together to share stories and celebrate successes.

In 1969, a group of young men and women graduated from the University of Arizona with engineering degrees and headed off to start their jobs and lives. On Nov. 1, 2019, several reunited at the College of Engineering’s Homecoming festivities to catch up on 50 years of exploring the world, climbing corporate ladders and engineering a better future.

“It was the year of the first test flight of the Concorde, a supersonic transport plane,” said David W. Hahn, Craig M. Berge Dean of the College of Engineering, at the 2019 Engineers Breakfast. “It was also the year of Apollo 11. I know that inspired me, and many in this room, to go into engineering.”

The class graduated at the height of the Vietnam War, so most young men were required to enroll in the Reserve Officers’ Training Corps during their studies, and many were drafted into the military after graduation. Some made a career of the military or found leadership training there that bolstered their subsequent business careers. One even met his wife in the Air Force.

Whether they went on to academia, industry or government jobs, members of the Class of 1969 share common memories of maintaining busy course schedules, forming lifelong friendships and learning to think like engineers. Below, a few share highlights from their time at UArizona and the lives that followed.

John M. Bernal didn’t know much about engineering when he first came to UArizona, but a civil engineering major turned out to be a good fit. Bernal spent 30 years working for Pima County, retiring as the deputy county administrator for public works in 2017. He also earned his UArizona MBA in 1982.

The highlight of his career, he said, was when then-President Bill Clinton appointed him as the U.S.-Mexico commissioner for the International Boundary and Water Commission from 1994 to 2001. In the role, Bernal was responsible for adhering to treaties between the two countries about sharing water resources from the Rio Grande and Colorado rivers. The North American Free Trade Agreement, or NAFTA, had just been initiated.

“The advent of NAFTA allowed me to participate in the planning and implementation of numerous water infrastructure projects to improve the quality of life along the international border for both countries,” he said.

Civil engineering alumnus Kent Erwin was active in ROTC and joined the U.S. Army after graduation. He took a position at McDermott International in 1974, in the midst of the oil crisis, and stayed there until his retirement 24 years later.

Though his career took him to nine different countries, including Australia, Belgium, Canada and the United Arab Emirates, one of his favorites was Russia. He lived there for 10 years as one of the initial project directors for Sakhalin-II, an oil and gas development on Sakhalin Island. It was the largest 100% foreign-owned oil and gas project in Russia at the time.

The most memorable piece of advice he got at UArizona was simple. It came from a professor emeritus who gave a class on how to navigate the business world, and it’s stuck with Erwin since his senior year: “If you have something to say, say it and sit down.”

For chemical engineering alumnus Scott Roberts, his 50-year college reunion came on the heels of his 50th wedding anniversary. He and his wife, Catherine, who also attended UArizona, got married in the Newman Center on campus their senior year and held a reception in Maricopa Hall. He spent a year working for Royal Dutch Shell PLC in research after graduation, and then earned a doctoral degree in chemical engineering from the University of Washington. Next, he returned to Shell and spent 35 years in research, engineering, manufacturing and business roles.

“I think the most valuable lesson I learned at the U of A was how to approach problems where you don’t have all the information you need,” Roberts said. “I did very well both in industry and in my PhD program, so I did feel well prepared, and I thank the U of A faculty for their guidance.”

Some of Paul Smith’s favorite memories come from his days in the Phi Kappa Alpha fraternity. As a chemical engineering freshman, he and a group of fellow pledges drove up to Flagstaff and brought back a truck full of snow, and then built a snowman in front of the Student Union for Homecoming. He also looks fondly on his time balancing the demands of his engineering class schedule with ROTC.

“In our sophomore summer labs and our senior project, we definitely learned about teamwork,” said Smith, who worked on a project for Atlantic Richfield, or ARCO. “I liked my senior project. I thought it was very helpful and it prepared me for when I graduated.”

Smith spent 22 years in the U.S. Army, in roles ranging from a company commander of a construction unit in Germany to an ROTC instructor in Georgia to a director of engineering and housing in Louisiana.

Tucson native Humberto Teran studied chemical engineering at UArizona because he knew it would be a lucrative path. He spent much of his time as an undergraduate at Louie’s Lower Level, a popular hangout once located in the basement of the Student Union.

“Louie’s Lower Level became the place where commuter students like me mingled,” he said. “I made lifelong friendships there.”

After graduation, he worked for 22 years at DuPont, the largest chemical company in the world at the time, moving from engineering to management after his second year. He also worked for Westinghouse Electric Corp. and OxyChem and as a consultant, finishing his career as the general manager of a joint venture between OxyChem and Sumitomo Bakelite. He enjoyed managing organizations and working with people.

Rick Whitaker spent his childhood fascinated by airplanes and the space program, so when he received a General Resident Scholarship from UArizona, he headed to the university to study aerospace engineering. Some of his favorite memories were heading out to Shakey’s Pizza with friends after football games and working as an usher in the Bear Down Gym for basketball games.

He served in the U.S. Air Force for seven years, where he met his wife, Maryelle. He then worked as a professional engineer, manager and consultant for companies such as Dset Laboratories, the DLR Group and Tetra Tech. A licensed pilot since 1972, he is also now a certified flight instructor and aircraft owner. The most valuable lesson he picked up at UArizona?

“Always check your work and never doubt you could be wrong,” he said. “My education prepared me by showing me I could learn almost anything -- if I put in enough work.”