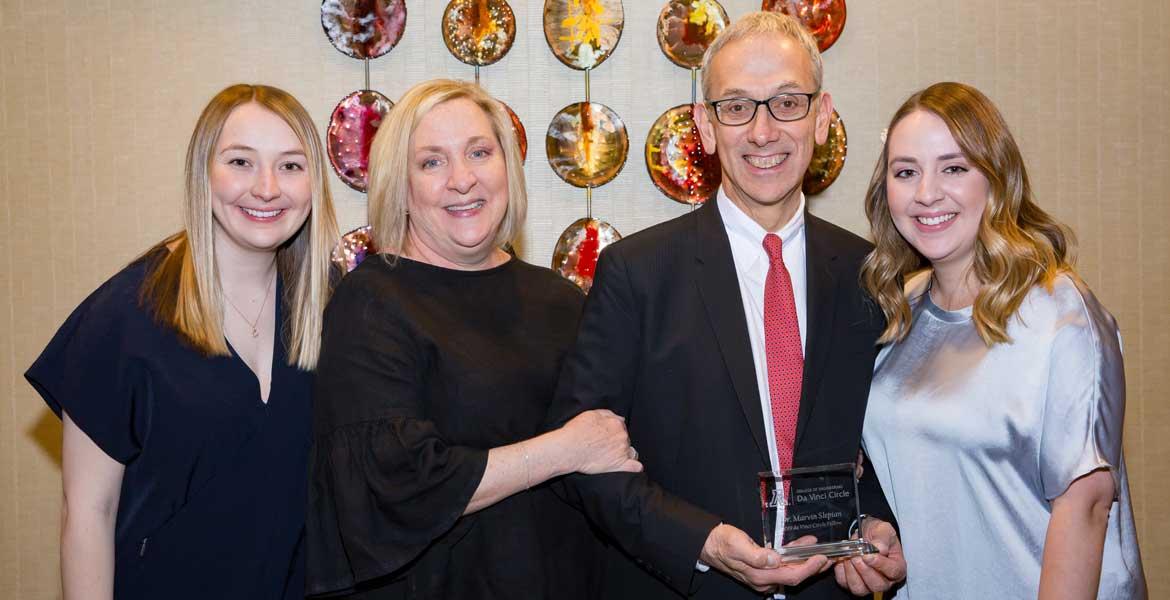 By
Emily Dieckman
Time to read
3 minutes
Print
a- a+
Read so far
University of Arizona faculty, staff, students, alumni and friends come together to recognize exemplary engineers of past, present and future.

’Twas the night before Design Day, and all throughout the grand ballroom at the Westin La Paloma Resort & Spa, engineers were gathered to celebrate the ingenuity of the profession at the UA College of Engineering’s annual da Vinci Circle Dinner.

In his remarks at the April 28 dinner, 2019 da Vinci fellow Dr. Marvin J. Slepian, associate department head for biomedical engineering and founder and director of the Arizona Center for Accelerated Biomedical Innovation, thanked his mentors and supporters and spoke about the importance of instilling the values of the great Leonardo da Vinci.

“My goal with this award is really to spread enthusiasm for the values of creativity, ingenuity in engineering and critical thinking,” he said. “As Provost Goldberg always reminds me, ‘Engineers solve problems!’”

About 220 faculty, students, staff, alumni and supporters of the college gathered for the evening, which started with a reception where several engineering design teams presented their senior projects. The teams, who went on to show their projects at the college’s 17th annual Engineering Design Day on April 29, had plenty of opportunities to practice their problem-solving skills.

A week and a half before the event, the acrylic casing on one team’s project -- a bioreactor to strengthen stem cells as they develop into cartilage -- shattered. Luckily, the team members had some leftover money in their budget to buy ¼-inch-thick, bulletproof glass to replace it. Another team designed and built an uncrewed aircraft to fly at a competition, but its landing gear broke off during the competition a few weeks before Design Day.

Past deans Jeff Goldberg and Tom Peterson attended the event, as did the college’s recently announced dean David Hahn, who starts at the university July 1. Interim Dean Larry Head, who earned all three of his systems engineering degrees at the UA, greeted the crowd and said he believed Hahn would make an ideal leader for the college.

“I’ve really enjoyed the opportunity and the experience to serve as interim dean,” he said. “One of the things I've enjoyed the most is getting to meet so many of our fantastic alumni. This is a great college. I love the University of Arizona.”

Another alumnus, Armin Sorooshian, professor of chemical and environmental engineering and recipient of a five-year, $30 million NASA grant in 2018 to study the way aerosols affect cloud formation, gave a keynote speech about his research. According to the World Health Organization, he said, aerosol particles lead to more deaths worldwide than any other environmental threat, including unsafe water.

“I am humbled to be the PI of this major NASA mission, and the best part for me is having resources to recruit several new graduate students who will have the once-in-a-lifetime experience to go on this five-year ride with me,” he said.

“Because of the financial support I received, I was able to focus all of my time on schoolwork and on research, which has been truly enlightening,” Ordine said. “If it wasn’t for the financial support, I would most likely have had to find a different job, unrelated to my field.”

UA Engineering also inducted the third class into its Hall of Fame, created to recognize alumni who have made significant contributions to their professions, the college and society.

“I think my engineering degree was essential to my career. It allowed me to operate in engineering and also to move into marketing and later company management,” said CEO of Intelligent Instrumentation Gene Tobey, who earned bachelor’s and master’s degrees in electrical engineering at the UA in 1959 and 1961. “It allowed me to understand really and completely the business of the company.”