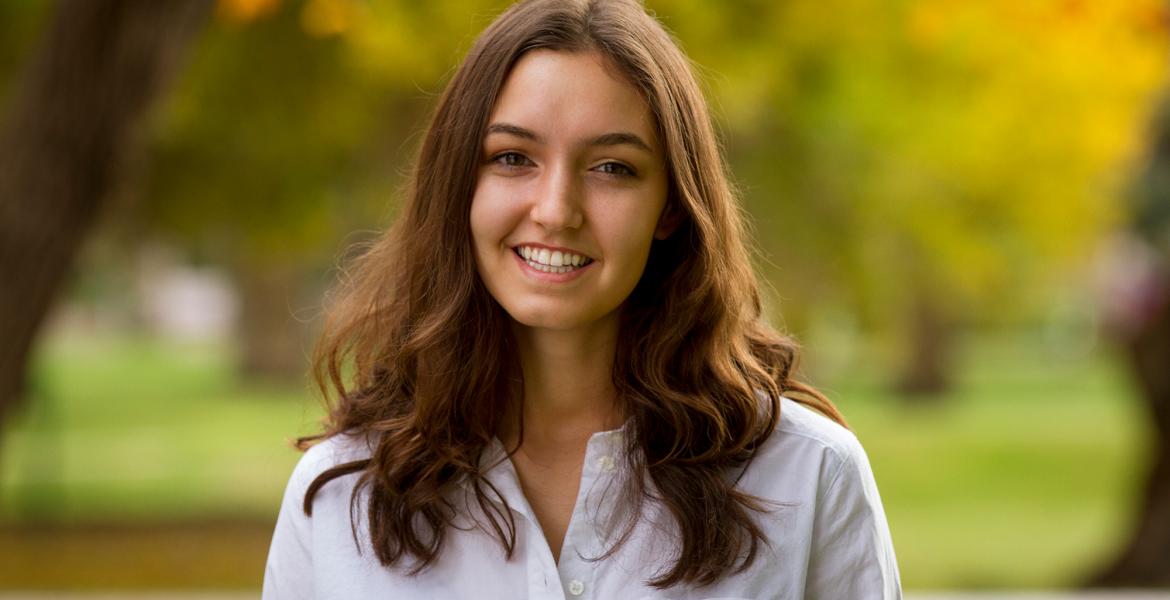 By
Emily Dieckman
Time to read
3 minutes
Print
a- a+
Read so far
Systems engineering and mathematics double major Keara Burke is helping NASA's OSIRIS-REx spacecraft find the perfect place to collect samples at its far-flung destination, the asteroid Bennu.

"I've never felt more connected to what it means to be human," Burke said. "The entire trip was focused on human identity."

As an image processing intern on the UA-led OSIRIS-REx NASA mission, the systems engineering and mathematics double major has expanded her exploration of humanity well beyond Europe's borders – indeed beyond Earth's atmosphere.

The seven-year OSIRIS-REx project, which began with the launch of the spacecraft in September 2016, aims to collect about two ounces of regolith – dust, dirt and rock particles – from the surface of Bennu, a near-earth asteroid 150 million miles away. Scientists will use the sample to study the history of the solar system and of humankind, seeking answers to questions about our origins and what lies ahead.

Carbon-rich asteroids like Bennu may contain some of the earliest records of our solar system and are thought to have delivered to Earth building blocks of life – amino acids, organic molecules and water. Someday, the water, organic compounds and precious metals on these asteroids could fuel spacecraft to explore deep space.

OSIRIS-REx arrived at Bennu on Dec. 3 and begin orbiting the asteroid to map and survey its surface before the scheduled July 2020 regolith collection. A capsule containing the sample is expected to depart Bennu in March 2021 and return to Earth in September 2023.

As a child, Burke was more interested in the humanities and arts than science. But the Scottsdale-area native has always enjoyed looking at the stars in the clear Arizona sky and pointing out the planets to her friends. A high school chemistry teacher told her she had a bright future ahead if she applied herself.

"Maybe in engineering," he suggested. "You could even be an astronaut!"

Burke hasn't looked back. She homed in on systems engineering at the UA because of its solid foundation in optimization, statistics and planning – areas that come naturally to her – and picked up a second major in math along the way. She started interning with the OSIRIS-REx team during her sophomore year.

Burke's task is to help identify the safest place on Bennu, one that isn't too rocky, for the spacecraft to collect a sample with its Touch-And-Go Sample Acquisition Mechanism. The TAGSAM arm is only expected to touch Bennu's surface for five seconds, but doing so in an area with lots of rocks could compromise the mission.

The TAGSAM will collect rocks only up to about three-quarters of an inch (2 centimeters) in diameter. Rocks larger than 21 centimeters can block the entire collection head, Burke explained, and rocks taller than 5 centimeters can cause the TAGSAM to tilt, affecting how much the chamber can collect.

"We have to be able to track all these hazards," said Burke, whose job involves counting the number of rocks in the images of Bennu that OSIRIS-REx sends back to Earth every day.

Using a combination of software and statistical analysis to determine the quantity, relative size and distribution of rocks on the asteroid, the image processing team hopes to identify the best possible sample site for OSIRIS-REx.

"The first part of our imaging campaign once we arrive at the asteroid will involve establishing the global distribution of rocks on the asteroid," Burke said. "Then we'll zoom in on the areas that seem safe, image those and pick a site that seems the safest for the TAGSAM to make contact."

Burke started her internship counting rocks in images of a simulated asteroid surface with a particle distribution similar to what the team expects to see on Bennu, and she offered to analyze the data when she finished. It was a big task for an undergraduate, but the mission's lead image processing scientist, Daniella DellaGiustina, agreed to let her try. Within weeks, Burke had installed a matrix laboratory, or MATLAB, library onto the mission's computers, giving the team better data analysis capabilities than ever before. The American Geophysical Union selected Burke to present at its December meeting, which is the largest Earth and space science conference in the world.

"It is rare to work with an undergraduate who is brilliant enough to lead PhD-level research," DellaGiustina said. "I am continually impressed with her adeptness in both technical and professional matters."

Burke, the vice president of the Engineering Student Council, an Engineering Ambassador and a member of several honors societies, likes going down what she calls different "rabbit holes" of information. In her work on OSIRIS-REx, she's learned about everything from photogrammetry to 3D modeling to presenting research. The information she's gathered will come in handy in the coming months as she helps lead the analysis of the distribution of rocks across Bennu's surface.

"It's really nice to work in such a good, smart group of people," Burke said. "Being included in the conversations is kind of unreal. It took a while for me to really be able to believe, 'Wow, I'm on a NASA mission.'"