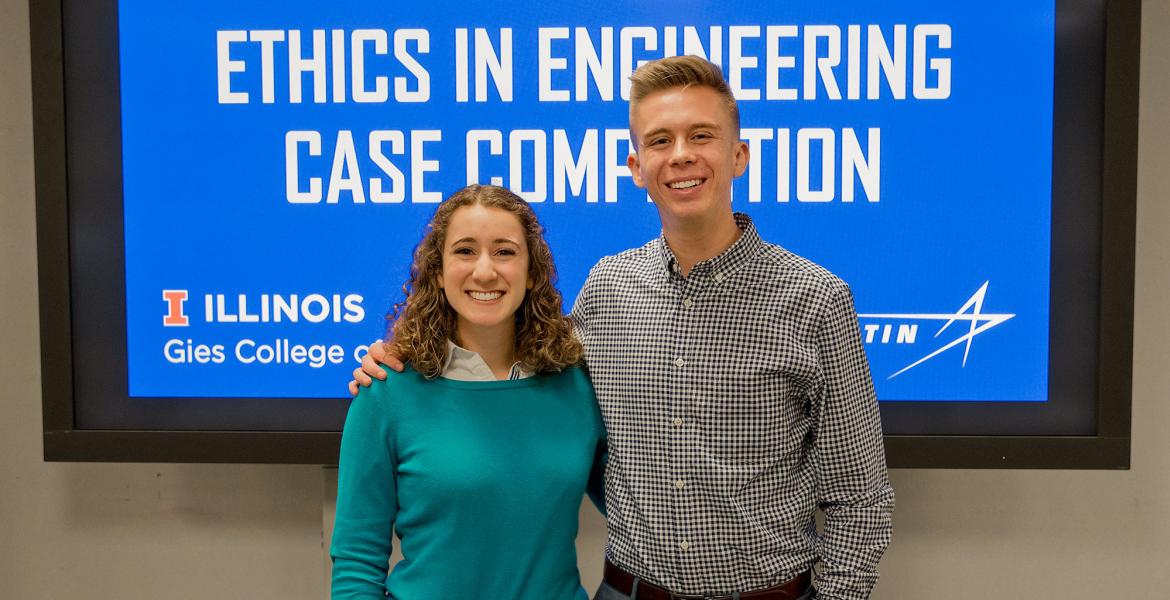 By
Emily Dieckman
Time to read
1 minute
Print
a- a+
Read so far
A dynamic duo from the University of Arizona took second place in the Lockheed Martin Ethics in Engineering Case Competition in February.

“What I liked about the competition is you were given this case study and you had to identify the engineering, ethical and business challenges of it, so you were forced to look at it from all these different perspectives,” Kaplan said.

Teams of two students each were presented with a problem from the fictional company NOVA Inc., which is set to launch its NOVA-2 device -- a communication system designed to protect large, city-sized areas from armed terror attacks -- in 30 days. But company scientists have just found out that the wearable device exposes users to 10 times the recommended level of nonionizing radiation. Addressing the technical problems would mean delaying the product launch for up to two years and putting NOVA employees’ jobs on the line.

The UA team examined the fictional company’s core values, considered the inconclusive health reports surrounding nonionizing radiation and researched similar cases, such as a 1982 Tylenol recall. They also compared utilitarian and universalist frameworks Burton learned about in one of his ethics classes with Paul Melendez, founder of the Eller Center for Leadership Ethics. Their final plan, “Retain Refine Replace,” involved fixing the flaw in the NOVA-2 and temporarily offering customers an earlier version of the same product, at a discounted price, until the bugs were worked out and NOVA Inc. could ensure a safe launch of the NOVA-2.

Frank Broyles, a Texas attorney who earned his degree in mining engineering at UA in 1968, sponsors the Frank Broyles Engineering Ethics Award at the College of Engineering’s annual Design Day. He also serves on the board of the Center for Leadership Ethics with Melendez. It was Broyles who urged Kaplan and Burton to put together a student team for the competition.

“There’s an ethical component to almost all major decisions that we make in life,” Broyles said. “I think it was a great experience for the students and great for the school.”