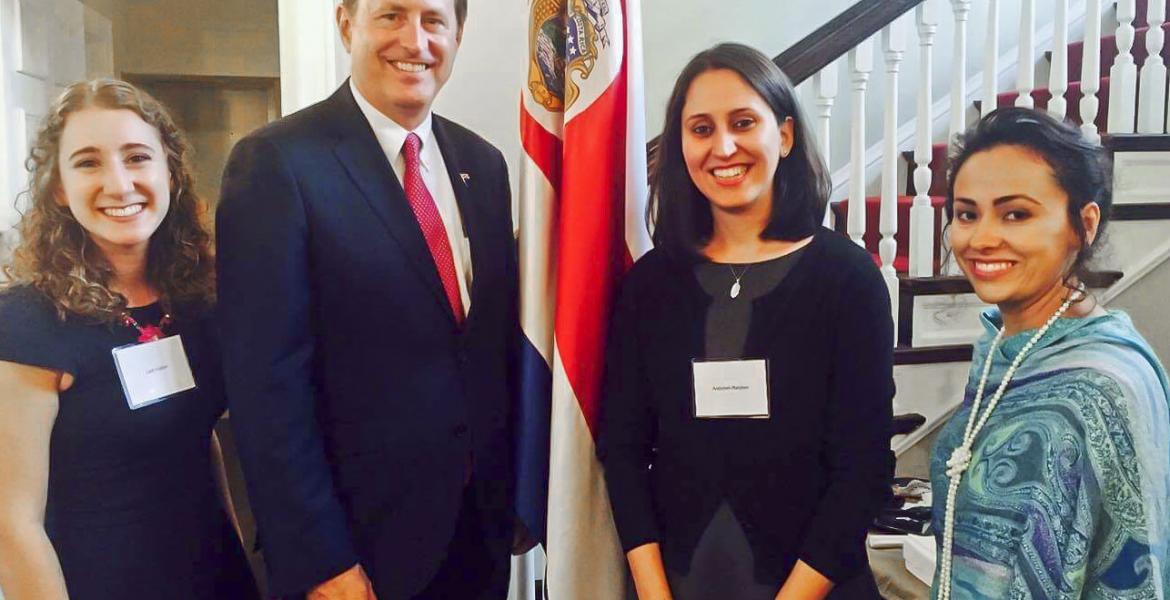 Students Step Up Global Negotiating Skills During Trip to Washington

By
Jill Goetz
Time to read
2 minutes
Print
a- a+
Read so far
Three UA Engineering students explore science diplomacy with foreign ambassadors, NASA researchers and international journalists, and show how the University is working to support a more peaceful world.

Three University of Arizona College of Engineering students put their negotiation skills to the test during a leadership workshop on science diplomacy in September hosted by the American Association for the Advancement of Science.

The UA students were among 32 participants -- including students, postdoctoral researchers and professionals from more than 16 countries -- selected by the AAAS from 90 applicants based on their essays, résumés, and recommendation letters.

“One of my favorite parts of the leadership workshop was a negotiation simulation concerning an international response to mercury contamination that was based on a real case,” said Leah Kaplan, a senior in chemical and environmental engineering and the workshop’s only undergraduate participant. “I was chair for my committee and had to act as mediator between representatives from seven countries and three NGOs. It was really challenging, but in the end we reached consensus on all four of our main issues.”

In addition to interactive training sessions, the program included lectures, embassy visits and a trip to the NASA Godard Space Flight Center.

Hassan Vafai, research professor in the UA Department of Civil Engineering and Engineering Mechanics, organized the UA trip and was an invited guest speaker at the AAAS workshop.

At a reception at the Costa Rican embassy, Ranjbari spoke with Román Macaya, the country’s ambassador to the United States, about collaborating with the University of Arizona on transportation research. She also met Richard Stone, international news editor for Science magazine, who has made many trips to Iran to interview government officials for articles about Iran’s advances in science.

“It was very interesting to me, as an Iranian, to learn about his insights,” she said.

This was Ranjbari’s second sponsored trip to Washington in a year. The Eno Center for Transportation named her one of the nation’s top 20 future leaders in transportation in 2016 and invited her for a week of meetings with transportation and policy officials. Ranjbari is conducting network modeling and operational analyses for a concept she developed for a high-speed intercity transit service.

Zawada, who has worked in science, law and business with the U.S. Senate, National Institutes of Health Office of Technology Transfer, Law Library of Congress, Goldwater Institute and Quarles & Brady law firm, used the opportunity to bolster her advocacy expertise.

“The workshop allowed me to engage with a constellation of science policy superstars and exposed me to new pathways to develop trust and facilitate better communication with government officials,” said Zawada, research assistant to Jon Dudas, UA senior vice president and secretary and former U.S. undersecretary of commerce for intellectual property. “I am already applying the skills I learned to more convincingly sketch the story of UA research for our elected representatives.”

Kaplan, Ranjbari, Zawada and Vafai made a presentation about the February 2017 UA Science and Diplomacy Conference sponsored by the UA Department of Civil Engineering and Engineering Mechanics and Office of Global Initiatives.

“Our presentation was a great opportunity to inform the other workshop participants that the University of Arizona is taking the lead engaging in science diplomacy,” Kaplan said.