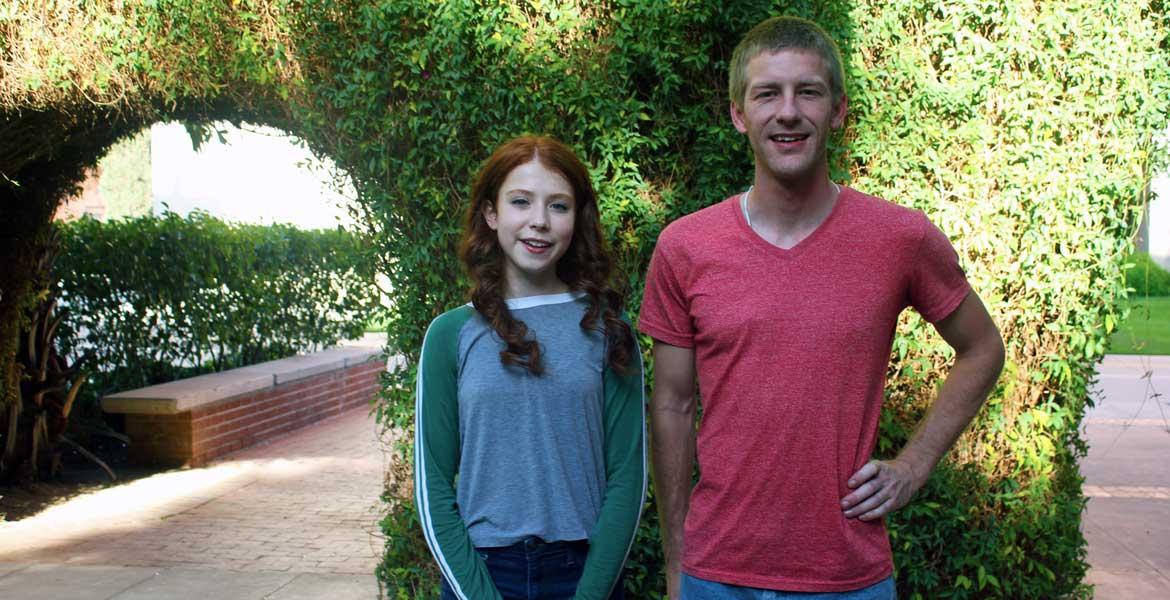 By
Emily Dieckman
Time to read
3 minutes
Print
a- a+
Read so far
Ask and you shall receive: High school freshman turns to UA researcher for help with her project on aerosol particles.

While she was thinking of ideas for her science fair project, Hannah Shoffner, a 15-year-old freshman at Empire High School in Vail, Arizona, thought about how much she loved the cloud patterns over the Sonoran Desert. She decided to do her project on aerosols and how they affect cloud formation and rainfall, but she needed an expert to help her with her research.

She and her parents perused the University of Arizona websites for researchers and came across Armin Sorooshian, a chemical and environmental engineering professor who received a $30 million NASA grant in 2018 for his work researching aerosols. Shoffner figured she had nothing to lose, so she sent him an email.

“I was a little bit intimidated and nervous when I sent the email, because I was like, ‘This guy is official,’” Shoffner said. “‘This guy is the real deal.’”

Sorooshian took action immediately, reaching out to his graduate students to see if any of them were interested in mentoring Hannah. Joe Schlosser, a first-year chemical engineering doctoral student, volunteered right away.

“Having an ambitious high school student contact me about my research and ask for mentorship is the type of email that rises to the top of the pile,” Sorooshian said. “Not only do I get the chance to excite a student about research, but it gives a graduate student of mine a chance to serve as a mentor. Three generations are impacted in a positive way.”

Schlosser and Shoffner got right to work. At their first meeting, Schlosser spent a few hours teaching his mentee how to analyze data about the average rainfall and the average amount of aerosols in different parts of Arizona.

“Working with Hannah was fun because she was so motivated,” Schlosser said. “I was very impressed with her. She worked hard and learned quickly -- the code we were working with was pretty sophisticated, and she understood what it was doing. She was easy to mentor.”

This isn’t Shoffner’s first time doing research for a science project. She’s done science fair presentations on solar panels, electrolytes in sports drinks and, way back in the third grade when her interest in science was first sparked, an experiment with yeast blowing up a balloon.

But this is the most in-depth project she’s ever done. Shoffner demonstrated the negative correlation between aerosols and rainfall through a series of graphs and identified different kinds of aerosols. Her favorite part was when all the data came together at the end and she exclaimed to her mom, “There’s trends!” Her honors biology teacher, Michael Frank, who spends his summers as a visiting scholar at the UA School of Plant Sciences, said he encourages students to conduct their own unique research rather than repeat typical science fair experiments.

“It’s great seeing students get into their projects, especially the kids who take it as far as Hannah did,” he said. “Seeing their eyes light up and their enthusiasm about their projects when they talk about them, or when they figure out how to get around a stumbling block, is always cool.”

Shoffner talked to KOLD about her project at the 2019 SARSEF science fair.

Frank wasn’t the only one who thought Shoffner’s enthusiasm was impressive. Her presentation earned her one of the first-place awards at her high school science fair.

“I was a little bit surprised because there were some really sophisticated projects, especially the seniors who went way into detail,” Shoffner said. “So I was pretty excited.”

Shoffner’s win meant she went on to the Southern Arizona Research, Science and Engineering Foundation annual science fair. More than 95,000 K-12 students in Southern Arizona create research projects at their schools each year, and about 5,000 students, representing 2,000 projects, advance to the SARSEF fair.

She swept again, winning the second-place Grand Award, awards for Outstanding Achievement in Ability and Creativity in Atmospheric Science and Outstanding Project in Geosciences, and the Pulse of the Planet Award.

Shoffner isn’t completely set on what she wants to do after high school. But she’s always loved science, and this project bolstered her interest in the subject. Maybe someday, she said, she’ll join Sorooshian at the UA. He thinks the university would be lucky to have her.

“Joseph is a top-notch mentor who took an amazing student like Hannah under his wing and allowed her to showcase her creativity and talent to tackle a timely issue in Arizona: dust and its relationship with rainfall,” Sorooshian said. “They are both rising stars, and I am grateful to have received that first email from Hannah.”