The University of Arizona student chapter of the Society of Hispanic Professional Engineers, or SHPE, continued its winning streak at the organization’s 2015 national conference in Baltimore on Nov. 11-15. 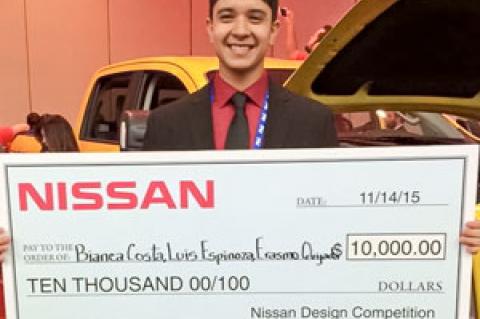 The UA chapter won the Outstanding Leadership Development Award in a field of more than 300 student chapters nationwide.

“This award demonstrates that all the effort we put into SHPE pays off,” said Fermin Prieto, chapter executive vice president. “SHPE helps us grow as professional engineers and develop our leadership skills. In our chapter, we accomplish this by having a very active membership and organizing and hosting events that benefit the Tucson and University of Arizona communities.”

The Wildcats also won first prize regionally, and fourth place nationally, at the Academic Olympiad, a written and oral competition of technical know-how in engineering, science and math subjects. UA beat out the 36 other chapters in Region 2, which includes Arizona, southern California, southern Nevada and Hawaii.

One of the 25 UA students at the conference also won the Nissan Design Competition and shared $10,000 in prize money with two students from other engineering schools.

“Winning the contest was an incredible experience, particularly since I want to work in the automotive industry,” said Erasmo Quijada Jr., a UA sophomore majoring in mechanical engineering.

“The SHPE national conference was a life-changing experience, academically and professionally,” he said. “I can’t wait for next year’s conference in Seattle!”

UA SHPE has been widely honored by the national organization over the years. Last year the chapter was named best nationwide for its community outreach programs, which include the La Familia computer-training workshop, Science Day program and Advancement of Latinos in Engineering/Young Latina Forum.