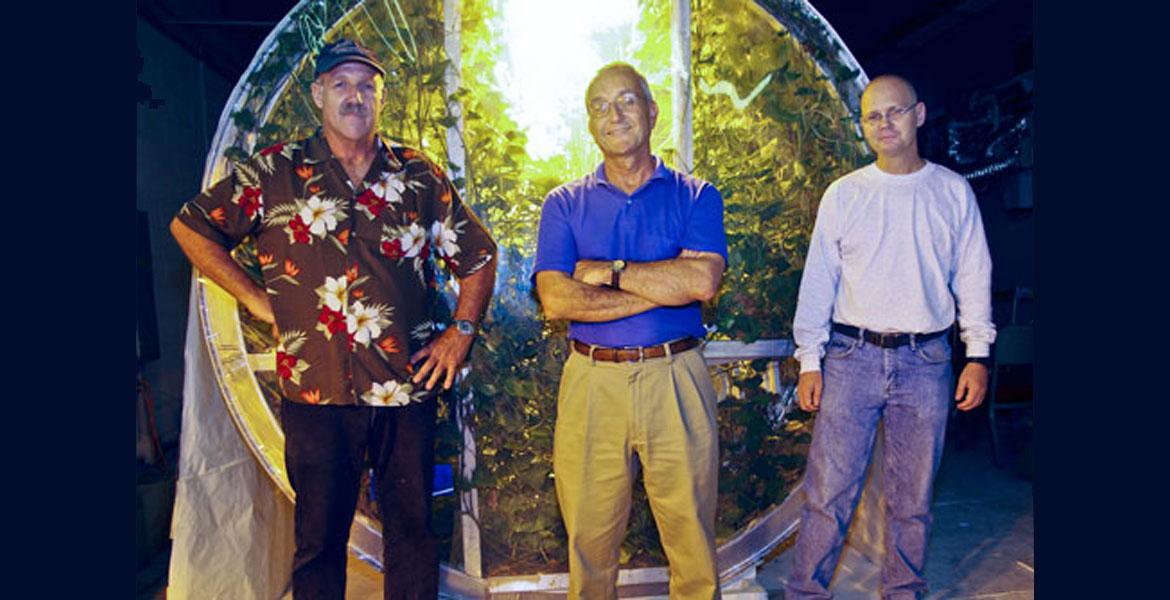 By
Ed Stiles
Time to read
4 minutes
Print
a- a+
Read so far
The first extraterrestrials to inhabit the moon probably won't be little green men, but they could be little green plants.

Researchers at the University of Arizona Controlled Environment Agriculture Center, known as CEAC, are demonstrating that plants from Earth could be grown hydroponically (without soil) on the moon or Mars, setting the table for astronauts who would find potatoes, peanuts, tomatoes, peppers and other vegetables awaiting their arrival.

The research team has built a prototype lunar greenhouse in the CEAC Extreme Climate Lab at UA's Campus Agricultural Center. It represents the last 18 feet of one of several tubular structures that would be part of a proposed lunar base. The tubes would be buried beneath the moon's surface to protect the plants and astronauts from deadly solar flares, micrometeorites and cosmic rays.

The membrane-covered module can be collapsed to a four-foot-wide disk for interplanetary travel. It contains water-cooled sodium vapor lamps and long envelopes that would be loaded with seeds, ready to sprout hydroponically.

"We can deploy the module and have the water flowing to the lamps in just ten minutes," said Phil Sadler, president of Sadler Machine Co., which designed and built the lunar greenhouse. "About 30 days later, you have vegetables."

Standing beside the growth chamber, which was overflowing with greenery despite the windowless CEAC lab, principal investigator Gene Giacomelli said, "You can think of this as a robotic mechanism that is providing food, oxygen and fresh drinking water."

Giacomelli, CEAC director and a professor of agricultural and biosystems engineering, said that although this robot is built around living green plants -- instead of the carbon fiber or steel usually associated with engineering devices -- it still requires all the components common to any autonomous robotic system.

These components, which include sensors that gather data, algorithms to analyze that data, and a control system to optimize performance, are being designed by Assistant Professor Roberto Furfaro of systems and industrial engineering, and Associate Professor Murat Kacira of agricultural and biosystems engineering.

"We want the system to operate itself," Kacira said. "However, we're also trying to devise a remote decision-support system that would allow an operator on Earth to intervene. The system can build its own analysis and predictions, but we want to have access to the data and the control system."

This is similar to the way a CEAC food-production system has been operating at the South Pole for the past six years.

The South Pole Growth Chamber, where many ideas now used in the lunar greenhouse were developed, was also designed and fabricated by Sadler Machine Co. It provides fresh food to the South Pole research station, which is physically cut off from the outside world for six to eight months each year.

Inside the lunar greenhouse

In addition to food, the growth chamber provides a valuable psychological boost for scientists who overwinter at the station.

"There's only five percent humidity and all you can normally smell is diesel fuel and body odor," Sadler said. But now researchers can go into the growth chamber and smell vegetables and flowers and see living green things, breaking the monotony of thousands of square miles of ice and snow surrounding their completely man-made environment.

"If I need to be there in the chamber looking over an operator's shoulder, that's possible with the web camera," Patterson explained. "But if I need to make an adjustment to the chamber without the operator's assistance, I can do that electronically via computer communication."

Recycling and efficient use of resources are just as important to the South Pole operation as they will be on the moon, Sadler noted. A dozen 1,000-watt sodium-vapor lights generate a lot of heat, which is siphoned away by each lamp's cooling system and used to heat the station. "Energy is expensive there, " Sadler said. "It's about $35 a gallon for diesel fuel."

In fact, efficient use of resources is just as important for hydroponic greenhouses anywhere on the globe, Giacomelli emphasized. "All that we learn from the life support system in the prototype lunar greenhouse can be applied right here on Earth," he added.

"On another planet, you need to minimize your labor, recycle all you can and operate as efficiently as possible," he said. "If I ask the manager of a hydroponic greenhouse in Willcox [Ariz.] what's most important, he or she will tell me those same things -- recycle, minimize labor, minimize resource use."

Carbon dioxide is fed into the prototype greenhouse from pressurized tanks, but astronauts would provide CO2 at the lunar base just by breathing. Similarly, water for the plants would be extracted from astronaut urine, and the water-cooled electric lights might be replaced by fiber optic cable -- essentially light pipes -- which would channel sunlight from the surface to the plants underground.

The lunar greenhouse contains approximately 220 pounds of wet plant material that can provide 53 quarts of potable water and about three-quarters of a pound of oxygen during a 24-hour period, while consuming about 100 kilowatts of electricity and a pound of carbon dioxide.

"We turned the greenhouse on about eight months ago to see how it would operate and that test run will be completed on September 30," Giacomelli said.

NASA is funding that research under a $70,000 Ralph Steckler Space Grant Colonization Research and Technology Development Opportunity, which CEAC obtained with help from UA's Lunar and Planetary Laboratory. The Steckler grants are designed to support research that could lead to space colonization, a better understanding of the lunar environment and creation of technologies that will support space colonies.

CEAC now is applying for Phase II of this grant, which would provide an additional $225,000 for two years.

Although NASA funds the test run, "everything you see in this room -- the greenhouse module, lights, water system -- came out of Phil Sadler's pocket," Giacomelli said. "I paid for the student help and pay the bills for the research space. Obviously, we think this is important work."

The UA researchers and Sadler Machine also are collaborating with two Italian firms on this project: Thales Alenia Space, a company that builds hardware for the International Space Station, and Aero Sekur, which builds inflatable structures.

"There's great interest in providing locally grown, fresh food in cities, for growing food right where masses of people are living," Giacomelli said. "It's the idea of growing high-quality fresh food that only has to be transported very short distances. There also would be a sense of agriculture returning to the everyday lives of urban dwellers."

"I think that idea is as exciting as establishing plant colonies on the moon."