By
Jill Goetz
Time to read
5 minutes
Print
a- a+
Read so far
More than 400 students demonstrate what they and their team-designed inventions are made of. Robots to protect soldiers and slides for biomedical samples take top honors at the University of Arizona’s Engineering Design Day 2015.

A whirlwind of creativity, innovation and excitement marked the 13th Annual Engineering Design Day on the University of Arizona campus May 5 as 80 senior design teams competed for $20,000 in prizes. 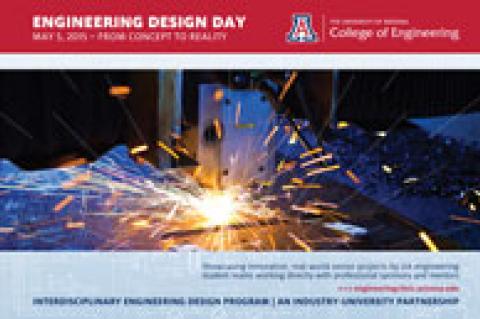 Top prizes for best overall design went to a robot protecting soldiers from “toe poppers” and to a system for keeping biomedical samples on slides at a controlled temperature.

Some 45 sponsors from industry, academia and government supported the teams of seniors, who displayed their projects on the UA Mall and in the Student Union.

Attendees included 90 judges from sponsoring organizations; UA faculty; several groups of middle-school students from the Tucson Unified School District; and participating seniors’ family members and friends, many from out of state.

“I was so pleased to be able to get a glimpse of the talent that UA Engineering students have at Design Day," said University of Arizona President Ann Weaver Hart. "The event is a wonderful example of the way that UA Engineering students apply what they have learned in a realistic setting. Through opportunities to interact with industry, community organizations, and K-12 students, this day and the work leading up to it help to fulfill the University of Arizona’s commitments to 100 percent student engagement and partnership.”

The robot triggers small, hard-to-find improvised explosive devices -- known as “toe-poppers” for their low explosive charge -- in the paths of soldiers on patrol.

The unmanned ground vehicle system is designed to detonate hidden IEDs by applying a certain pressure to the ground as it moves along ahead of military personnel.

Like in real life, many of the design teams faced challenges. For example, delays in parts shipments forced the winning team to improvise.

“There were trade-offs. Our RON goes slower -- only about 2 to 3 mph -- but at no cost to mobility or steering,” said systems engineering student Elisa Duarte. Duarte is spending this summer at her second internship with Raytheon before starting the master’s program in management science and engineering at Stanford.

“This award means the world to me, because I know all the work that went into it and all the roadblocks we faced.”

Second prize for overall design went to the super-stainer precision thermal control. Team members from biomedical, industrial, mechanical and electrical engineering developed a system for Ventana that can hold a standard-size microscope slide and maintain its temperature to precise specifications.

Other big winners included a drone to monitor transmission lines for Tucson Electric Power; a system to diagnose equine health by monitoring hoof condition; and hologram-based headgear for pilots to safely land aircraft at zero visibility.

More than 6,000 individual users from several countries tuned in to Facebook throughout the day to follow the action and cheer on their teams.

College of Engineering Dean Jeff Goldberg expressed admiration for the students’ perseverance and fortitude, and gratitude to the sponsoring organizations, judges, faculty and other mentors and staff who made the event possible.

“In nine months, it’s not so easy to get something fully functional that can be put into use,” he said. Noting that the cost of the projects this year was half a million dollars, he thanked the judges, company sponsors, faculty and staff, adding, “Without you, we would not be able to do something of this magnitude.”