By
Jill Goetz
Time to read
3 minutes
Print
a- a+
Read so far
A multidisciplinary research team discovers how cells know to rush to a wound and heal it -- opening the door to new treatments for diabetes, heart disease and cancer.

Researchers at the University of Arizona have discovered what causes and regulates collective cell migration, one of the most universal but least understood biological processes in all living organisms. 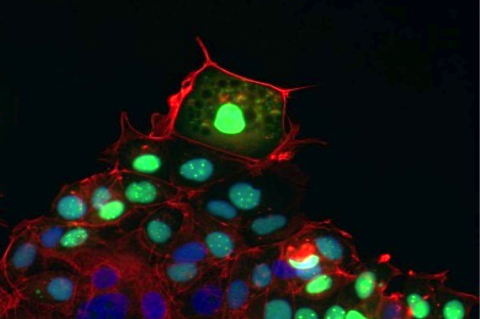 Leader cells, shown fluorescing green in this photomicrograph, pull follower cells in their wake as they move to cover and heal a wound.

The findings, published in the March 13, 2015, edition of Nature Communications, shed light on the mechanisms of cell migration, particularly in the wound-healing process. The results represent a major advancement for regenerative medicine, in which biomedical engineers and other researchers manipulate cells’ form and function to create new tissues, and even organs, to repair, restore or replace those damaged by injury or disease.

“The results significantly increase our understanding of how tissue regeneration is regulated and advance our ability to guide these processes,” said Pak Kin Wong, UA associate professor of mechanical and aerospace engineering and lead investigator of the research.

“In recent years, researchers have gained a better understanding of the molecular machinery of cell migration, but not what directs it to happen in the first place,” he said. “What, exactly, is orchestrating this system common to all living organisms?”

Leaders of the Pack

The answer, it turns out, involves delicate interactions between biomechanical stress, or force, which living cells exert on one another, and biochemical signaling.

The UA researchers discovered that when mechanical force disappears -- for example at a wound site where cells have been destroyed, leaving empty, cell-free space -- a protein molecule, known as DII4, coordinates nearby cells to migrate to a wound site and collectively cover it with new tissue. What’s more, they found, this process causes identical cells to specialize into leader and follower cells. Researchers had previously assumed leader cells formed randomly.

Wong’s team observed that when cells collectively migrate toward a wound, leader cells expressing a form of messenger RNA, or mRNA, genetic code specific to the DII4 protein emerge at the front of the pack, or migrating tip. The leader cells, in turn, send signals to follower cells, which do not express the genetic messenger. This elaborate autoregulatory system remains activated until new tissue has covered a wound.

Biologists have known of the existence of leader cells and the DII4 protein for some years and have suspected they might be important in collective cell migration. But precisely how leader cells formed, what controlled their behavior, and their genetic makeup were all mysteries -- until now.

“Knowing the genetic makeup of leader cells and understanding their formation and behavior gives us the ability to alter cell migration,” Wong said.

With this new knowledge, researchers can re-create, at the cellular and molecular levels, the chain of events that brings about the formation of human tissue. Bioengineers now have the information they need to direct normal cells to heal damaged tissue, or prevent cancer cells from invading healthy tissue.

The UA team’s findings have major implications for people with a variety of diseases and conditions.  For example, the discoveries may lead to better treatments for non-healing diabetic wounds, the No. 1 cause of lower limb amputations in the United States; for plaque buildup in arteries, a major cause of heart disease; and for slowing or even stopping the spread of cancer, which is what makes it so deadly.

The research also has the potential to speed up development of bioengineered tissues and organs that can be successfully transplanted in humans.

In the UA Systematic Bioengineering Laboratory, which Wong directs, researchers used a combination of single-cell gene expression analysis, computational modeling and time-lapse microscopy to track leader cell formation and behavior in vitro in human breast cancer cells and in vivo in mice epithelial cells under a confocal microscope.

Their work included manipulating leader cells through pharmacological, laser and other means to see how they would react.

“Amazingly, when we directed a laser at individual leader cells and destroyed them, new ones quickly emerged at the migrating tip to take their place,” said Wong, who likened the mysteries of cell migration and leader cell formation to the processes in nature that cause geese to fly in V-formation or ants to build a colony.

Wong and his co-authors, UA College of Pharmacy professor Donna Zhang and four current and former UA Engineering graduate students, reported their findings in the Nature Communications article “Notch1-DII4 Signalling and Mechanical Force Regulate Leader Cell Formation During Collective Cell Migration.” The study was supported by a $1.5-million National Institutes of Health Director’s New Innovator Award and funding from the National Cancer Institute. Wong and Zhang are both members of the UA's BIO5 Institute.