UA Engineering Grad is Training Hard for 2012 Paralympics in London

By
Steve Delgado
Time to read
3 minutes
Print
a- a+
Read so far
A former University of Arizona wheelchair tennis player and recent graduate of the UA engineering management program continues his hard work to play for Team USA in the 2012 Paralympics in London. 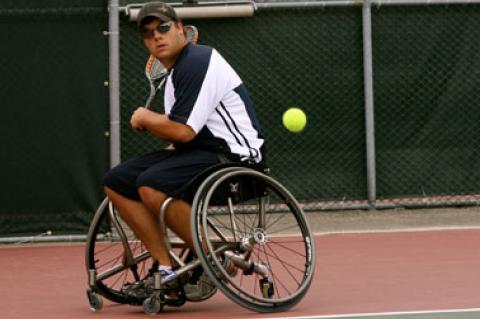 Yablong, a top wheelchair tennis player with a world ranking of 58 and a U.S. Tennis Association ranking of 4, played for the UA Wheelchair Tennis team during his entire undergraduate engineering studies at the UA. The UA wheelchair team is part of the university's Adaptive Athletics program, one of the only programs of its kind in the nation and operated by the UA Disability Resource Center.

Yablong, 24, has been playing wheelchair tennis since he was 13, beginning just a few years after he was diagnosed with Legg-Calve-Perthes disease, a condition that affects the bone and joints at the hip. The other adaptive sport Yablong plays is wheelchair basketball, which he's been playing since age 12.

This summer Yablong has been on a six-hour-a-day training regimen in preparation for the 2012 Paralympics, which run from Aug. 29 to Sept. 9, 2012. His routine includes playing tennis in the morning for an hour-and-a-half to two hours, swimming for one to two hours immediately afterward, and then hitting tennis balls for two hours in the evening.

When he began training, Yablong says he did two sessions of cardio work per day, and one session of tennis. But as the games approach, he's switched to two sessions of tennis and one of cardio. Is he ready for Paralympic competition yet?

"I'm getting there. I'm not where I want to be quite yet, but I'm sure I'll be there when the games come around," said Yablong, who currently lives in Boynton Beach, located on Florida's east coast just north of Miami.

"My ranking has fallen just a bit because I haven’t been playing in tournaments, I've just been preparing for the games," he said. This will be Yablong's first appearance at the Paralympic Games.
Yablong graduated in May 2012 from the UA engineering management program. Balancing academic studies with athletics can always be a challenge, even more so when the program includes plenty of mathematics- and physics-based engineering studies.

"Noah was the type of student that took responsibility for his own learning," recalled Jane Hunter, associate director of the UA engineering management program. "When he missed classes due to his team commitments, he always found a way to keep up with his school work," she said.

"He never expected special treatment… he just got it done," Hunter said.

Yablong said that while he enjoyed the mechanical aspect of aerospace engineering, and had a knack for the drafting side of civil engineering, he wanted to ultimately be on the people side of engineering projects. "I really enjoyed the classes and courses in engineering management," compared to other programs, he said.

UA Wheelchair Tennis coach Bryan Barten, who will also be competing as a U.S. wheelchair tennis player this year in London, said he's proud of what Yablong has been able to accomplish. "The life of a student athlete is not easy… in addition to Noah's academic requirements, he had to train daily and travel to competitions throughout his time at the U of A," Barten said. "It took a great deal of time and dedication to receive his degree and achieve this level of athletic success at the same time," he said.

Another UA Engineering student, Matt Farmen, also plays on the UA Wheelchair Tennis team, but is not competing in this year's Paralympics. Farmen, a UA civil engineering graduate, is scheduled to graduate in December 2012 with a master's in civil engineering.

"Adaptive sports really don’t get the same publicity, and it's really kind of sad because it's really impressive to watch," Yablong said. "Most people who come to the games just to watch are always amazed at how much ability people have in wheelchairs."

"Playing in a wheelchair as opposed to being able to run on a court… you lose a lot of mobility," he said. "We can make all the same shots, but we can’t move around the court as easily."

Some fans of the adaptive sport think that wheelchair tennis players could beat a lot of non-chair players. Yablong believes that if some of the top wheelchair tennis players in the world competed with players in the Wimbledon or U.S. Open tournaments, the wheeled players could probably make it through at least the first few rounds of competition.

Which prompts the question, does an engineer have the advantage in tennis?

"I'm not sure if there's an advantage, because it’s a game you can learn whether you're an engineer or not," Yablong said. "I'm a little better with geometry on the court -- the angles of shots -- and I tend to have a better angle on shots (as a result of) the myriad of physics and related classes. I think that the physics do help a little bit, but I've always had to pay attention to the momentum of the ball and the momentum of myself in the chair."

The entire schedule of events of the London Paralympic Games can be viewed here: http://www.london2012.com/paralympics/sports/.

And more information on the engineering management program at the University of Arizona can be found here: http://sie.engr.arizona.edu/bachelor-science-engineering-management.