The UA student chapter of the Society of Hispanic Professional Engineers, or SHPE-UA, has been honored with Raytheon's Mission Assurance Level II Eagle Award. 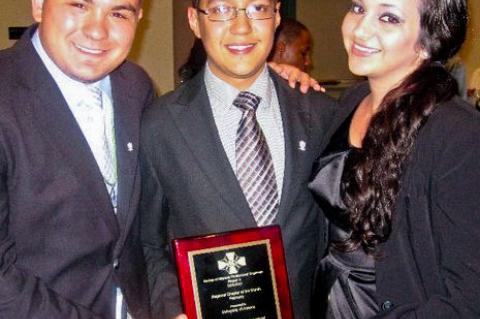 SHPE-UA have won multiple awards over the years. In the photo, from 2011, members display their award for chapter of the month at the 2011 SHPE Regional Leadership Development Conference in Santa Barbara, Calif. Left to right are Mario Valdez, current club president; Jose Estrada, former SHPE-UA president; and Karen Rivas, then Young Latina Forum coordinator.

"Very few Eagle Awards have ever been awarded and it represents a heartfelt thank you from Raytheon and the troops for [SHPE-UA's] commitment to education and community, and anticipated contributions when the student members of the club become professionals in the field," said Raytheon quality systems manager and UA Engineering alumnus James Valenzuela, a corporate mentor to SHPE student members.

Valenzuela, himself a former SHPE member, made the award on behalf of Raytheon to pay tribute to SHPE's dedication to the company's mission assurance core values -- knowledge, discipline, courage, attention to detail, and personal warranty.

The Society of Hispanic Professional Engineers, and its student chapters, are committed to the development and implementation of programs aimed at recruiting and retaining Hispanic students in science, technology, engineering and mathematics. Raytheon is a longtime supported of the UA chapter.

Valenzuela's ties to the club run deep -- his brother, John, was a founding member. James continues to honor John through mentoring and leadership, giving back to what he calls the family network, which provided the encouragement and support that led to his graduation from the UA as an engineer.

Valenzuela has so far mentored 400 UA students and asks that they each go out and mentor 400 more. "I teach them that it is expected for them to give back as a way to thank those who gave support to them," he said. "It's not just about taking."

"The UA is one of the finest engineering schools in the country and the difference is that all the professors believe in the students and invest the time to help them succeed," Valenzuela said. "The students of the UA's SHPE earned this award and have taken the club to new levels of success."

The UA's SHPE program has grown from 10 to more than 100 students since its inception in 1982. The group has several community-based outreach events, including the Advancement of Latinos in Engineering Day and the Young Latina Forum, a combined event that targets high school students from low-income areas in Tucson to encourage interest in and access to engineering fields.

The UA club also annually hosts a free basic computer workshop in English or Spanish, called "La Familia," which is open to everyone in the Tucson community interested in learning how to use a mouse, send an email, do a search, or write a resume.

The SHPE student members learned of the award during their end-of-semester banquet, and club president Mario Valdez, a mechanical engineering senior and honors student, said he was speechless when the award was presented.

"Our club is not focused on receiving awards. We focus our time on working on our profession and on organizing our community events. It was a total surprise. We are thankful for Mr. Valenzuela's and other Raytheon employees' commitment to the club and our professional development," Valdez said.