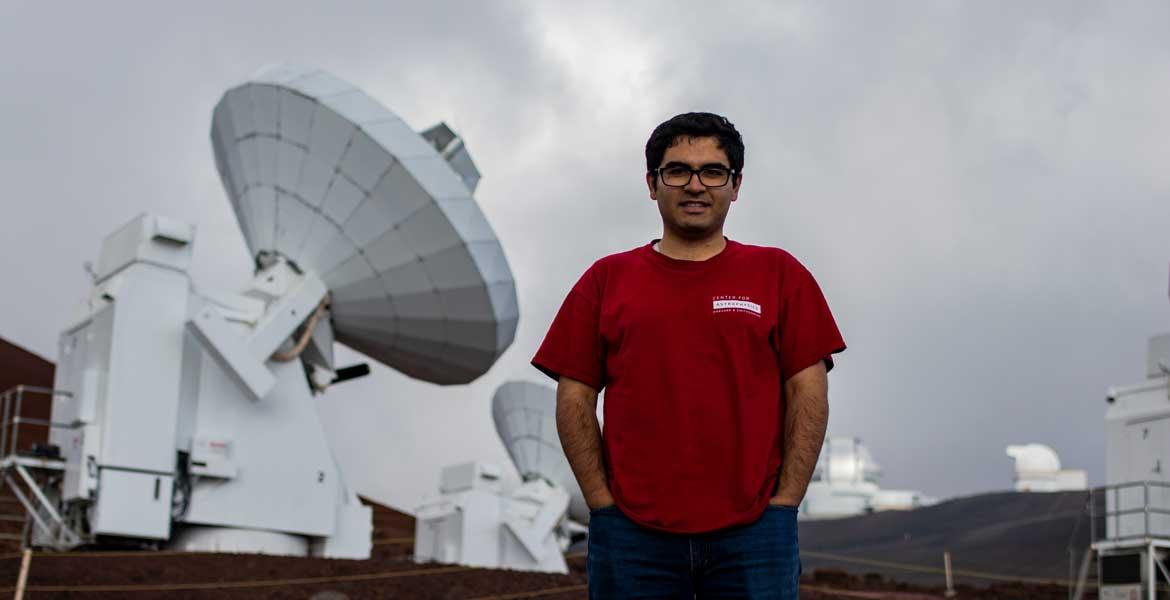 By
Emily Dieckman
Time to read
3 minutes
Print
a- a+
Read so far
Arash Roshanineshat’s digital signal processing skills and tools are helping a worldwide astronomical community write the next chapter on the universe’s most extreme objects.

When he was a kid growing up in Iran, Arash Roshanineshat spent a lot of time looking up at the sky while his uncle and cousin pointed out constellations. Now he does his stargazing with the high-powered telescope of the Steward Observatory and as part of the global Event Horizon Telescope, or EHT, team. The team captured the first image of a black hole and announced its discovery earlier this year.

Arash, a doctoral student majoring in electrical and computer engineering and minoring in astronomy at the University of Arizona, has also studied at Cleveland State University and the University of Zanjan in Iran. He began working on the EHT project during an internship at the Harvard-Smithsonian Center for Astrophysics. Then he came to the UA for his doctoral studies, partly to study with Harvard alumnus Dan Marrone and stay involved with the project.

“I was looking for a graduate student or postdoctoral researcher who had the background to really lead this, and he seemed almost perfectly suited for the role,” said Marrone, an associate professor in astronomy.

From Humanoid Robots to M87

During his undergraduate education, Arash developed robots to teach children with autism English. He and his fellow researchers found that while the children were shy and hesitant with people, they interacted well with humanoid robots. He was planning to continue working on similar projects in the United States, but an internship at the National Radio Astronomy Observatory opened his eyes.

“I’ve always been interested in looking at the sky,” he said. “But I didn’t know I could work on this subject while I was doing my studies in electrical engineering.”

The EHT project involves combining the powers of telescopes all over the planet to capture data from space -- about 5,000 trillion bytes of data, enough to keep a playlist of high-quality MP3 files playing for 4,700 years. Arash is working on signal processing algorithms for taking the data, processing and recording it, and passing the data on to astronomers.

“I know both electrical engineering and astronomy, so I’m trying to connect the two,” he said.

It took hundreds of people and years of effort to capture the image of the black hole in Messier 87, or M87, a massive galaxy in the Virgo cluster 55 million light-years from Earth. The discovery has generated much excitement, but Arash says that really, the research has only just begun. Now the group is working on capturing images of other supermassive black holes, such as the one in the smaller galaxy Sagittarius, which is closer to Earth.

I've always been interested in looking at the sky."

Arash is running simulations to find the best level of recording precision for processing the petabytes of data pouring in from space. Too much precision can be a waste because it doesn’t add any useful information. Not enough means you lose some of the data needed to produce an image.

“EHT is the type of project that includes scientists from many backgrounds: astronomers, chemical engineers and chemists, electrical engineers, computer scientists,” he said. “I am really happy to be a part of this collaboration, and I’m determined to do my best to ensure I make the most of the opportunity.”

Arash is the founder and president of CASPER Arizona, which stands for the Collaboration for Astronomy Signal Processing and Electronics Research, at the University of Arizona. The student club brings together electrical and computer engineers, astronomers, and physicists to create radio astronomy signal processing tools. It also teaches members how to use the tools and supplies hardware. The club welcomes students with different levels of scientific knowledge.

He uses CASPER tools in his research and is helping organize a CASPER workshop at Harvard to take place in August 2019. Marrone says Arash’s work on these tools will benefit the whole astronomical community.

“Signal processing is a major research area in ECE,” said Tamal Bose, UA electrical and computer engineering department head. “It’s exciting that Arash, and other ECE students, have been able to apply their work to these astronomical advancements.”

When he isn’t conducting research, Arash is part of the video game design club, and he likes swing dancing. He also enjoys photography -- especially astrophotography -- and he spends many nights at the telescope, looking out across the stars and remembering why he does the work he does. There’s nothing like looking out at distant galaxies to keep an engineer and astronomer motivated.

“His energy and desire to involve more students in education has helped the project in many ways, and EHT in many ways,” Marrone said. “If we had 10 Arashes, we would be infinitely better off. It’s good I have one, though.”