By
Jill Goetz
Time to read
3 minutes
Print
a- a+
Read so far
Jim Field and Shane Snyder, UA professors of chemical and environmental engineering, are honored for their research and leadership in global water sustainability.

Two researchers in the University of Arizona department of chemical and environmental engineering have been named 2016 fellows of the International Water Association for their work combating water challenges worldwide. 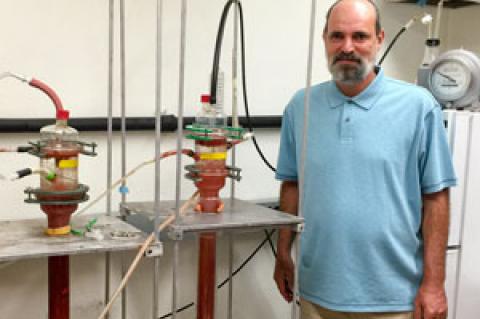 Jim Field is developing technologies to rid wastewater of contaminants like arsenic with anammox bioreactors.

The professors were among 39 water professionals chosen by their peers to serve five-year terms as IWA fellows. The organization’s 10,000 members include engineers, scientists, utility managers, regulators and other professionals from 130 countries.

The association formally recognized all IWA fellows at a reception on Oct. 10 as part of the IWA World Water Congress and Exhibition 2016 in Brisbane, Australia.

Field and Snyder are among 190 water professionals named IWA fellows since the award was established in 2010, and they are the second and third at the University of Arizona. Professor Charles Gerba in the department of epidemiology and biostatistics has been a fellow since 2010 and was reappointed for another five-year term.

As a doctoral student in environmental technology at Wageningen University in the Netherlands, Field and renowned researcher Gatze Lettinga developed anaerobic, or oxygen-free, wastewater treatment technology to conserve water and reduce manufacturing costs for the pulp and paper industry. The process is still used today more than 25 years later.

Now Field is creating environmentally friendly technologies to remove pollutants. For example, he is using anaerobic microorganisms to remove toxic contaminants like arsenic and uranium at mine-impacted sites, including several in Central and South America. Besides inhibiting contaminants from reaching watersheds, his “bio-refinery techniques” extract valuable elements from mine waste -- such as tellurium, critical for making solar panels.

Field has published 250 research articles in peer-reviewed scientific journals and serves on the editorial board of Biodegradation. In 2001 he was a co-recipient of the Lettinga Award for his work on anaerobic biodegradation and technology. He a former fellow of the Dutch Royal Academy of Sciences and former Fulbright Specialist. He is an investigator on the UA Superfund Research Program and co-director of the Dean Carter Binational Center for Environmental Health Sciences.

Field has been an active IWA member for more than 25 years, chairing scientific committees and delivering keynote addresses at IWA conferences, and reviewing the IWA-produced research journals Water Research and Water Science & Technology.

In 2014, after chairing the UA department of chemical and environmental engineering for five years, Field became assistant dean for graduate education in the College of Engineering. He has mentored more than 100 graduate engineering students at the UA and other universities, and many of his former advisees are IWA members today.

Snyder, an expert in converting wastewater to potable water, specializes in the identification, fate and medical implications of emerging water pollutants. He has joint faculty appointments in the UA Mel and Enid Zuckerman College of Public Heath and College of Science and is a member of the BIO5 Institute.

Snyder was co-investigator on a pilot system developed at WEST to convert wastewater into high-quality drinking water. The project, a partnership of the UA, the engineering firm CH2M and Tucson Water, was chosen 2016 WateReuse Arizona Project of the Year.

He is a consultant on water quality issues to governmental and nongovernmental agencies in the U.S. and abroad and has testified three times before Congress. He serves on the Drinking Water Committee of the Environmental Protection Agency’s Science Advisory Board and on the World Health Organization’s Drinking Water Advisory Panel.

Previous honors include receiving the 2015 Dr. Pankaj Parekh Research Innovation Award from The Water Research Foundation, being appointed a board-certified environmental scientist by the American Academy of Environmental Engineers and Scientists in 2014, and serving on the National Research Council Committee on Water Reuse of the U.S. National Academy of Sciences. Snyder has co-authored over 175 research journal articles and book chapters and is editor-in-chief of the international environmental journal Chemosphere.

He earned his doctorate in environmental toxicology and zoology at Michigan State University and co-founded the Applied R&D Center for the Southern Nevada Water Authority before joining the UA College of Engineering in 2010. An active IWA member for 20 years, he helped organize last year’s IWA World Congress in Lisbon, Portugal, and this year’s conference in Brisbane, and he’s co- organizing the IWA Water Reuse Conference in Los Angeles in 2017.

Snyder is a visiting professor at the National University of Singapore and adjunct professor at the Gwangju Institute of Science and Technology in South Korea, and he has organized international water conferences from China to Namibia.